In the park Yellowstone the tourist was dissolved in acid 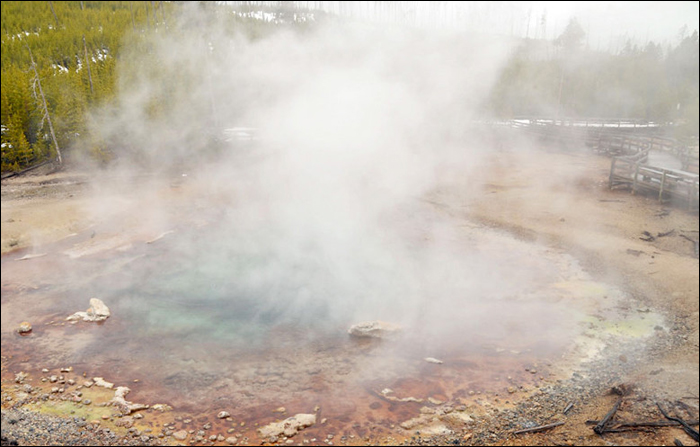 In the USA violation by the tourist of rules of visit of national park ended with the tragedy: the man decided to bathe in a hot spring and died, CNN reports.

Incident occurred in June, however details became known this week. Local authorities published on November 15 the accident report after a request of local TV channel Kulr 8.

According to it, on June 7 23-year-old Colin Scott with the sister Seybl visited the Yellowstone national park (State of Wyoming). During walk they descended from the wooden flooring which is specially built in gay grain the pool Norris to bathe in thermal sources, despite the warning signs placed everywhere about their danger.

Seybl Scott shot with the mobile phone as her brother approached water and tried to try it a hand, however slipped, fell in boiled water and died. The rescuers who arrived to the place found dead Colin already, but couldn’t pull out a body of water because of the beginning thunder-storm. When they returned next day, didn’t find any traces of a corpse on the place – in water only footwear and a wallet floated.

According to the deputy manager of group of rangers Laurent Veres, most likely, in a night the body was completely dissolved in very hot water with high concentration of acid. According to the report of national park, water temperature that day constituted more than 100 degrees Celsius.

The Yellowstone national park was open in 1872. It is located in the territory of states Wyoming, Montana and Idaho. An incident occurred on the edge of the Yellowstone caldera which is also called a supervolcano – its eruption can potentially lead to cardinal climate change on the planet. According to employees of the park, since 1980 as a result of the injuries got in hot springs in the territory of the park and about it 22 persons died.