In the US, the train collapsed on the highway 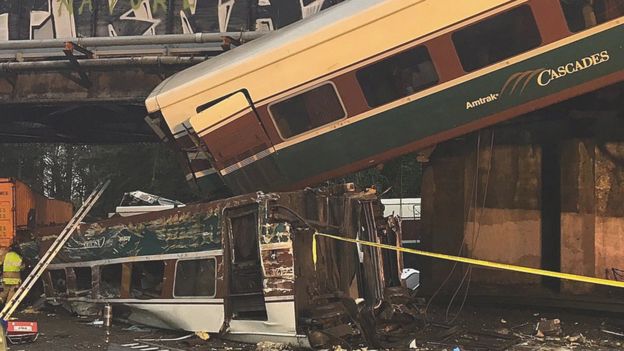 The high-speed passenger train of the Amtrak railway company, which followed from Seattle to Portland, was derailed on Monday in the US state of Washington. As a result of the accident, more than 100 people were hospitalized, at least six died.

The accident occurred after a sharp turn and arrival on the above-ground bridge. At least two cars collapsed on the I-5 highway, paralyzing traffic on the most loaded road northwest of the USA, leading from Canada to Mexico. Only in a southerly direction on this highway goes up to 60 thousand cars a day, specified the department of transport of the city of Tacoma, in 64 km from which there was an accident.

According to the network of medical institutions CHI Franciscan Health, more than 75 people were delivered to the hospitals of Tacoma and the suburbs, and taking into account the hospitals of neighboring settlements, the number of hospitalized ones exceeded 100. Four of them are in serious condition.

The number of victims confirmed by the authorities, according to CNN, still reaches three. The Associated Press (AR) reported six dead.

Data that the citizens of Russia suffered during the accident were not received, Tass advised Consul-counselor of the Consulate General of the Russian Federation in Seattle (Washington) Halit Aisin. “We are in contact with US law enforcement agencies.” At the moment, there have been no reports of foreign citizens, including Russians, injured in the accident, “he said. As Aisin explained, US law enforcement agencies agreed with Russian diplomats that they would “inform them when specific information” appeared on this matter.

Authorities are silent on the number of victims

Bella Din-Zarr, the official representative of the National Transportation Security Administration (NUPT), said that it is premature to talk about the causes of the accident and the number of victims. “We are sending a group of our investigators working on the west coast of the US The forward detachment will arrive at the site of the incident this afternoon, the rest are expected to catch up with the coming night.We plan to organize a lot of press conferences in Washington in the coming days, the representative of NUPT promised.

She also refused to name the number of victims and victims in the accident. “You probably heard the most diverse figures in the performance of various media, while we leave the right to answer this question to the authorities in the field,” said Dean-Zarr, explaining this decision to the requirements of the jurisdiction.

The only official authorized to answer press questions at the site of the tragedy was a representative of the Brook Bova Police Department. She admitted that for seven years of work she had never seen a traffic accident of this magnitude.

As she said, all 12 cars of a train and one of two locomotives have descended from rails. “A lot of losses, we can not yet name the exact number of victims,” ​​she said, confirming that there were more than 80 people on the train. According to the representative of the State Police, the cars that had broken off from the bridge-crossing were hit by “five [cars] and two trucks”. Leakage of fuel or fuels and lubricants at the scene of the accident was not identified.

“It seems that all the victims are concentrated in the wagons that scattered on both sides of the track,” admitted Detective Ed Troyer, a representative of the office of the sheriff of Pearce County, where the accident occurred. As the newspaper The New York Times has specified, rescuers had to use chainsaws to rescue people from a heap of the twisted metal.

Debut on the new branch

Washington Governor Jay Insley introduced Monday an emergency regime in the state. Insley warned against hasty conclusions about the causes of the accident. “Wait for me to judge what happened, nobody knows what really happened,” the governor said while visiting the victims.

Amtrak confirmed that this train made its first trip on Monday on a new branch of the railway, which was built under a $ 180.8 million project. The goal of the project is to speed up the transportation of passengers between Seattle (Washington) and Portland (Oregon). On the way, there are many turns and tunnels with a single-track, and he is also overloaded with goods transport.

According to Amtrak, this company is responsible for the Cascades rail service on the route from Vancouver (Canadian province of British Columbia) to Eugene (Oregon). The railroad belongs to one company, and the transport service on this route is to the Washington and Oregon transport authorities.

The maximum permissible speed on the section of the road where the accident occurred is 127.1 km / h. The composition, according to the agency AR, moved slightly faster – 130.4 km / h.

As CNN reported, Amtrak President Richard Anderson acknowledged that the Positive Train Control system, which allows the train to be braked to a halt when it reached a dangerously high speed, was not activated on the railroad tracks during the accident in the state of Washington. Richardson, as CNN notes, did not answer journalists’ questions about the speed at which number 501 was heading.

Richardson preferred to redirect media issues to the US National Transportation Security Administration. The spokesman for the NUBT, Bella Dean-Zarr, said earlier that it was premature to talk about speeding as a cause of a train accident in Washington State.

According to official data, the Positive Train Control system should earn on the whole Cascades branch by the summer of 2018. However, no one said exactly in which parts of the way this system was installed and in what areas it was activated on December 18. Positive Train Control could prevent such train crashes as the collision of goods and passenger trains in Los Angeles in 2008 (killing 25 people) and the train derailment in Philadelphia in 2015 (killing 8 people).