In Ufa the plane skidded off the runway 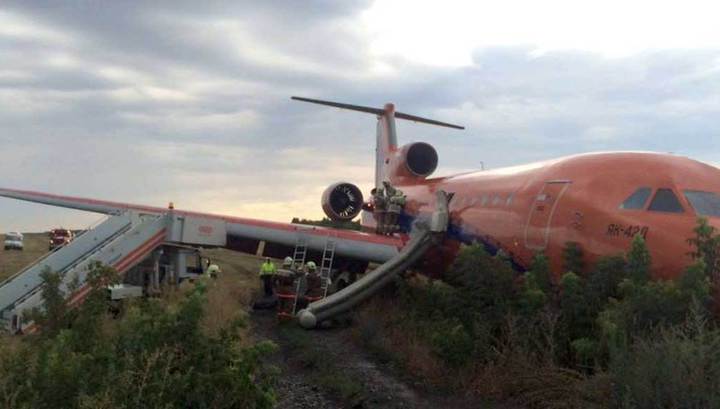 Emergency happened at the Ufa airport on the morning of August 12: there’s a plane skidded off the runway. The YAK-42 has arrived to capital of Bashkiria of Sochi, on its Board there were 118 people, including 29 children. All passengers were evacuated.

Discusses different versions of what happened. The cause of PE could be damage to the left landing gear. Because of this, the plane banked on the left side and slid off the runway.

According to another version, the cause of the accident was the bad weather. This scenario considered employees of Privolzhsky investigatory management on transport SK the Russian Federation. On the fact of incident is conducted preliminary examination.

According to preliminary data, August 12 at 4:30 Moscow time the passenger plane the Yak-42 airlines KrasAvia, flown in from Sochi to Ufa, while landing skidded off the runway at 400 meters, – told in the investigation Department. – None of the 118 passengers was hurt, the aircraft received damage to the chassis and the left wing.

In management reported that the investigative team had already begun inspecting the scene. The possible reason of incident could become a strong storm and heavy rain, but investigators are checking all versions of the incident, assess the technical condition of the aircraft, the actions of the pilots and ground control services, – specified in Department.

Meanwhile, passengers said that after a hard landing aboard began to panic. Flying this flight ufimka told that the plane could not come in for a landing.

First we hour circling over the town due to strong thunderstorm could not land. The plane was shaking, it was very scary, ” says the woman Sat on the ground with the blow, apparently the speed was great. We start to fill up on the left wing, here began a real panic. The children began to scream and cry, afraid of everything.