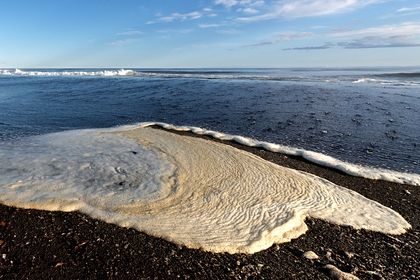 Surfers who were affected by water pollution on Khalaktyrsky beach in Kamchatka reported that their health problems began in September. They talked about this at a meeting with the head of Rosprirodnadzor Svetlana Radionova, RIA Novosti reports.

The athletes noted that already on September 9-10, those who spent a lot of time in the water began to complain of poor eyesight and a veil in their eyes. By the 20th, according to surfers, several people had poisoning and vomiting.

Radionova, in turn, stated that she constantly receives the results of analyzes of water samples. She noted that the amount of substances such as petroleum products, boron and phosphates exceeds the maximum permissible concentration. The head of the department explained that at the same time, the concentration is not so strong that a person could feel it, and it could lead to massive reactions.

Earlier it was reported that scientists from the Far Eastern Federal University (FEFU) discovered a pollution spot off the coast of Kamchatka from the air. As experts said, the stain is clearly visible, as foam of an unusual color appears on the waves, and there are also turbidity of a dark green hue. It was possible to establish the area of ​​contamination only approximately. The slick stretches for about 40 kilometers along the coast – from Salvation Bay to Listvennichnaya Bay. Its width ranges from 30 to 100 meters.

The appearance on the shore of Khalaktyrsky beach of many dead fish and sea animals became known on October 2. Dead animals were found in three more bays, and phenol and petroleum products were found in three areas of the Avacha Bay. Surfers who entered the water complained of corneal burns, nausea, and skin reactions. Rosprirodnadzor did not rule out the technogenic causes of the incident.