On the shores of China, an oil tanker exploded 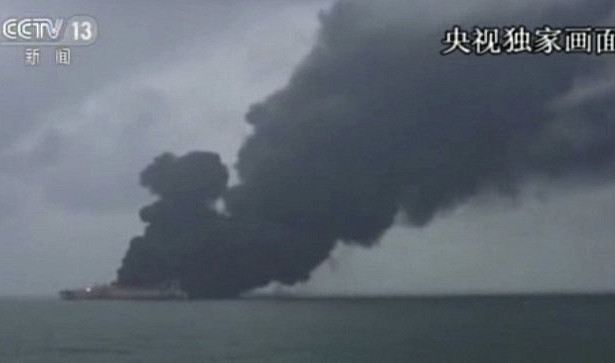 On the Panamanian oil tanker, which collided with a Hong Kong dry cargo ship and caught fire in the East China Sea, an explosion occurred.

In connection with the fact that on January 10 at 13.35 an explosion occurred on the SANCHI tanker, the work on fire elimination was temporarily suspended at the scene of the incident, search and rescue vessels were moved to a safe distance. Work on extinguishing the fire did not produce the expected results.

The explosion on the tanker, which transported 136 thousand tons of gas condensate, creates a potential threat to the environment.

A day earlier, Zhao Zhuxiang, an engineer of the highest category of the Yantai Emergency Response Center for Fuel Spill Response to the Fuel Spill of the Yantai Sea Safety Directorate, said in a published statement that the gas condensate contains toxic hydrogen sulphide and can pollute the atmosphere during evaporation. In addition, as the expert said, the gas condensate after burning breaks up into poisonous vapors that can enter the human body and damage its health.

The SANCHI tanker, owned by an Iranian company and under the Panamanian flag, collided with a Hong Kong CF CRYSTAL dry cargo ship off the east coast of China on the evening of January 6. A total of 32 people were on board the oil tanker, 30 of them Iranian citizens and two crewmen from Bangladesh. As a result of the collision, communication with them was interrupted. On Tuesday, rescuers found the body of one sailor.

On board the Hong Kong dry-cargo ship was 21 crew members, all of them were safely rescued. The PRC sent salvage ships and ships to eliminate the fuel spill to the scene. South Korea sent in search of the missing ship and helicopter, the US – patrol anti-submarine aircraft P-8 Poseidon.