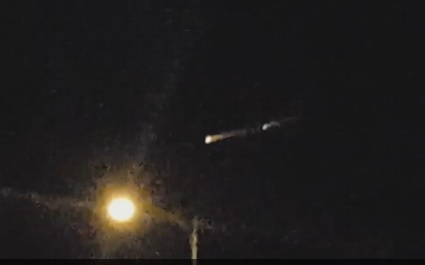 Tonight, US residents witnessed the unusual spectacle over the territory of America flew and burned the remains of the latest Chinese rocket “long March 7”, said astronomer Jonathan McDowell in his microblog network Twitter.

Today in seven mornings Moscow time in the us segment of the Twitter and Youtube began to appear reports and videos showing the flight of the strange “UFO” over the Western and Central States of the USA, which at times separated the large glowing “missiles”.

The source of this “unidentified object”, according to astronomer Jonathan McDowell of the Harvard-Smithsonian astrophysical Observatory in Cambridge (USA), was the second stage of recent Chinese rocket “long March 7”, whose first launch took place from Baikonur launch site on Hainan island on 25 June this year. The rocket put into orbit several small satellites and a prototype capsule of the future manned spacecraft for Chinese taikonauts.

The exact dimensions and weight of the missile is unknown, but McDowell suggests that the second stage of the new “Great trek” weighed more than five tons. According to the astronomer, the fall of large objects back to Earth are extremely rare – it is for this reason the remains of the rocket was clearly visible in the United States. The scientist does not exclude that some of the fragments of the stage can reach the Earth’s surface.

China began construction of the carrier rocket “long March 1” (Changzheng-1) in 1965. In five years, the rocket put into orbit the first Chinese satellite.

Rocket “long March 7”, along with larger “Great trip-5” and the smaller “Great hike-6”, designed by Chinese engineers over the last nine years. The main purpose of running it will, on current plans of space agencies of China, procurement of supplies of the future orbital station and the withdrawal of large satellites in Earth’s orbit.