Scientists have discovered a 150-kilometer patch of dangerous slime in the Sea of Marmara. It moves towards Greece 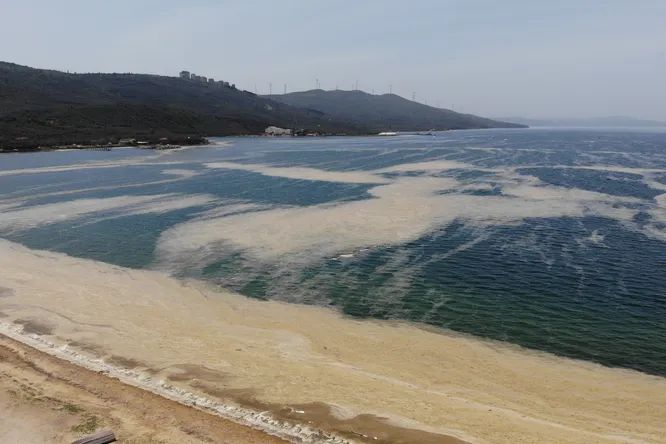 A patch of viscous substance stretched for 150 kilometers in the Sea of ​​Marmara. Slime moves towards the Greek island of Thassos.

Sea slime, which is composed of phytoplankton, threatens the life of marine organisms. The current carries her towards the Greek island of Thassos

According to TASS, researchers from the Marine Hydrophysical Institute (MGI) of the Russian Academy of Sciences have discovered a thick layer of dangerous mucus in the Sea of ​​Marmara. This slime has stretched for about 150 kilometers and is currently carried by the current through the Dardanelles into the Aegean Sea.

A viscous substance, which in the common people is called “sea snot”, is extremely dangerous for the ecosystem. This slime strangles marine life, clogs fishermen’s nets and fouls coastal areas.

Researchers do not know the exact reason for the appearance of “sea snot”. It is likely that the mucus is formed as a result of the proliferation of phytoplankton, which in turn thrives due to high temperatures and water pollution.

“This is a kind of phytoplankton waste product – it emits some substances that become colloidal, bacteria, viruses and so on accumulate on them,” says Sergey Stanichny, head of the department of remote sensing methods at MGI.

The Turkish authorities have previously paid attention to sea slime. According to The Washington Post, local officials used the ship’s pumps to suck up contamination in an attempt to clear the water from “snot.” Turkish President Recep Tayyip Erdogan has promised to do “everything possible” by declaring the sea a protected area.