There was a video of the explosion of Falcon 9 rocket 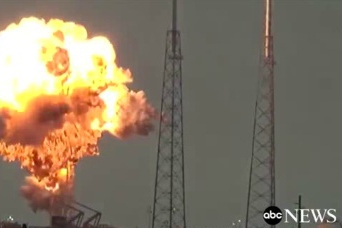 The TV channel ABC News has published in Facebook a video of the explosion of the Falcon 9 rocket at the launch site at Cape Canaveral.

Initially, the explosion occurred in the upper part of the carrier. Any visible preconditions to the explosion on entry is not noticeable. In just a few seconds the flames engulfed the rocket, which caused a number of explosions in other parts of the structure.

The incident occurred during the fire test at 16:00 Moscow time on the launch pad number 40, which is used by SpaceX. The test was part of preparations for launch, scheduled for September 3.

The fire carrier and mounted in its warhead payload is lost. The rocket was put into orbit the first satellite of the social network Facebook, created by Israeli aerospace company Israel Aerospace Industries (IAI). The cost of the device is $ 200 million.

The cause of the explosion identified failure of the launch pad.