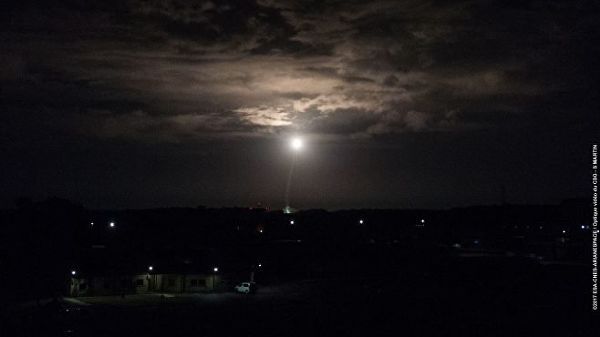 The video of the emergency launch of the Vega light launch vehicle with the UAE military satellite Falcon Eye 1 has been published.

The footage shows that immediately after the launch, which took place at 10:53 pm on July 10 local time (04:43 Moscow time on July 11) from the Kourou cosmodrome in French Guiana, the trajectory of the rocket’s flight gradually begins to shift.

“Approximately two minutes after the launch <...> a serious deviation occurred, which led to the loss of the mission,” said executive vice president of the French company Arianespace Luce Fabregett.

Fabregett apologized to the company’s customers and promised that the cause of the accident would be announced in the coming hours.

The Falcon Eye 1 satellite was to be the tenth in a row for the United Arab Emirates in Earth orbit. By 2020, the country plans to bring their number to 12.

The Guiana Space Center is a European space center in French Guiana (a department of France in South America).
Its location near the equator provides a 15% advantage in payload compared to launches eastward from the American spaceport at Cape Canaveral and 40% at launches from Baikonur.