Cold War seeded not only fear, but also hope for the better future in the hearts of people. In addition to rivalry in development of the military sphere, both parties – the USSR and the USA – tried to raise the superiority over the opponent and in more peace spheres, for example, in the same space. In time from 1957 to 1991 we became witnesses of start of the first space rocket, the first extravehicular activity and the first steps of the person on the Moon. The mankind which is warmed up by rivalry between two superstates achieved such results in scientific and technical progress of which earlier nobody could even dream. In today’s selection we will consider 10 very interesting space stories of times of a Cold War.

Nazis were the first in space 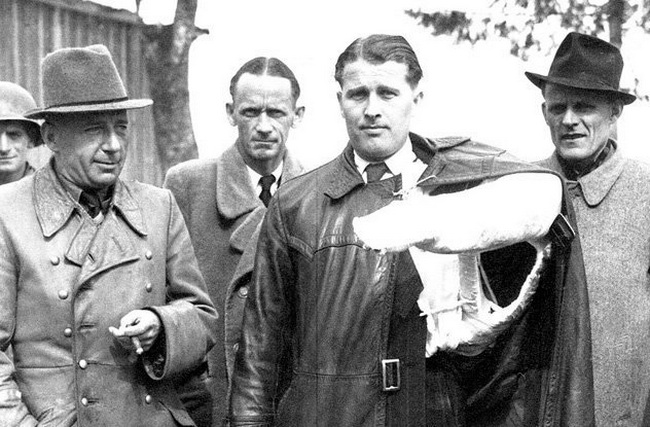 “For the first time we went beyond the atmosphere thanks to our rocket” — the scientist declared, joyfully uplifting a glass up.

Walter Dornberger was this scientific. Outside was on October 3, 1942 and Dornberger was a Nazi. It and his team at last finished work on the A-4 ballistic missile (better known as Fau-2″), for the first time in the history of started in space.

When Nazis lost, their dreams of space travel sank together with them. The nations which won them sorted for themselves all technologies and practices what only were. Stalin of one scientists convinced to cooperate and whom couldn’t convince – literally forced. The USA, in turn, started transaction “Paper clip”, having hired nearly 500 Nazi scientists in order that those helped Americans to recreate the A-4 rocket.

In both cases development of new projects crowned progress. The space race began, the NASA aerospace agency which was actually founded by the Nazi scientists forgiven to the USA was created. 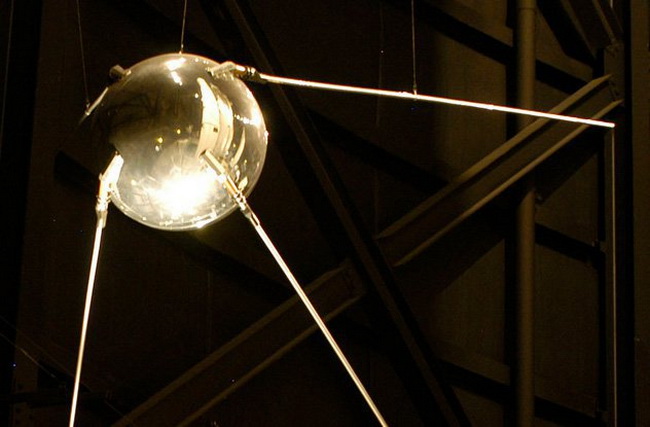 When America decided to launch the first rocket into an orbit of Earth, the president Eisenhower was tormented by one question. On the land and water of border of the states it is possible to designate accurately, but nobody ever thought of how to designate these borders if it is about height. If the American space probe appeared over the Soviet airspace, then this incident could lead to real war.

Therefore Eisenhower began fight for so-called “freedom of space”. According to the constituted memorandum, everything that is at the height of 100 kilometers above sea level, shall belong to “space” and not belong to any of the nations.

Didn’t agree with such formulation in the USSR. The soviet government wanted that this border was much above.

Eventually, Eisenhower achieved the, but lost in the technical plan. Earth the first Soviet device – “Satellite-1” orbited. Certainly, at some point this device flew by also over airspace of America therefore the USSR didn’t have choice how to sign the agreement. It is all about spy satellites which both Americans, and Russians wanted to have on Earth orbit. 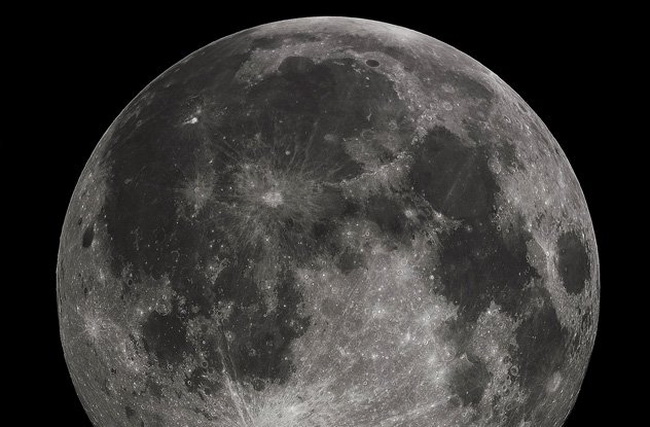 As soon as space starts became a reality, in the west of began to consider each science-fiction history as a real opportunity. Among the American government hysteria concerning possible succession of events in case of which Russia can begin nuclear bombing of the Moon begins to accrue.

Two nations sign “the agreement on space”. The main part of the document is connected with promises of free and peaceful conquest and a research of space. One of parts of the agreement is connected with the Moon. In it it is said that our natural companion shan’t be represented as the platform for placement of military bases. It is impossible to send soldiers to the Moon, to stage there military exercises. Besides, the prohibition of placement of nuclear or any other weapons of mass destruction in Earth orbit is described.

In addition, member countries of the agreement undertake not to make nuclear bombing of the Moon. Even for the sake of curiosity.

The USSR has created the space laser gun 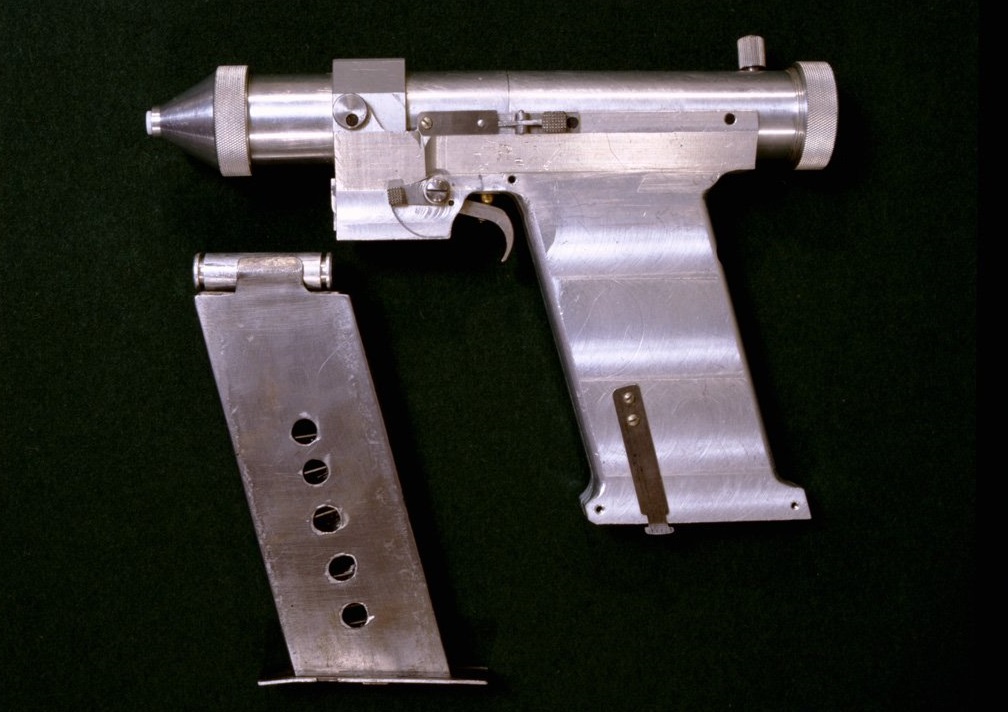 In the Country of Councils developed not only space rockets. The USSR from the point of view of the West not simply sought to get to space – he wanted to win all space spheres and questions including connected with the possible space conflicts. For this reason the space laser gun, the non-lethal weapon intending for defeat of sensitive optical devices of the possible opponent both in the closed spacecraft conditions, and in an outer space in infighting without risk to damage a covering and not optical equipment has been created.

Eventually the project was closed. Now one of copies of the Soviet space laser gun is stored in an exposition of the Museum of history of military academy of RVSN of Peter the Great.

People nevertheless flew to space armed. For example, the semi-automatic gun – just just in case — Yury Gagarin, the first person flying to space took with himself. Americans didn’t lag behind in this plan too. More precisely, they just lagged behind in the technical plan as took with themselves usual hunting knives, probably, without suspecting about a possibility of laser firefights.

The USSR and the USA could fly to the Moon together 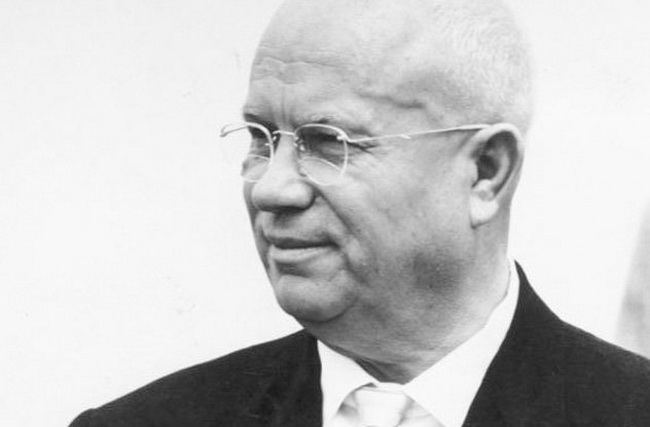 Conducted some time of the USSR in each separately taken sphere of a space race, but is closer to the middle of the 60th the Soviet superstate began to hand over line items. In 1963 within the cooperative program the Soviet academy of science invited scientists from NASA for experience exchange. Scientists from NASA then came to a conclusion that the USSR decided to refuse plans for sending the person to the Moon.

At that time the U.S. President Kennedy didn’t believe such conclusion, but nevertheless thought. Soon after this trip he proposed joint operation of two nations.

“Prerequisites for a new cooperation are. Among opportunities I include joint expedition to the Moon” — the U.S. President noted then.

If to trust Khrushchev’s son, the leader of the USSR was ready to agree to such level of a cooperation. However Kennedy was killed soon, and didn’t trust Lyndon Johnson Khrushchev who came to his place. As soon as the USA had a new president, plans for joint conquest of the Moon right there refused. 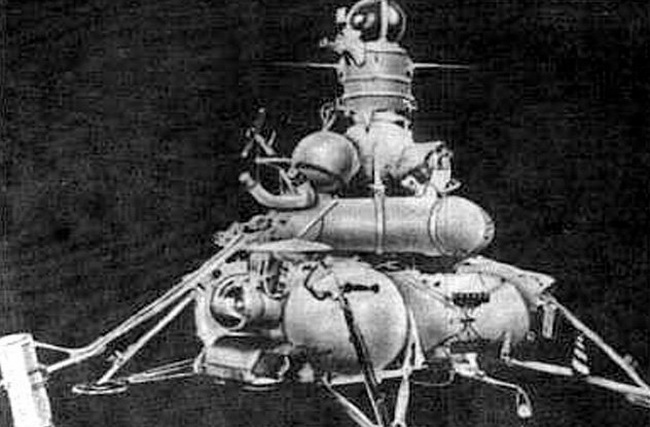 At the time of the space missions of Apollo the Soviet party has decided to resort to other plan. The USSR wanted to send the robotic probe to the Moon and to collect samples of lunar soil. Moon had to become this device. Specifically the device “Moon-15” has gone to the satellite of Earth three days before start of “Apollo 11”.

Both countries have exchanged the flight plans to avoid risk of collision of spaceships. The fact that actually the USSR hid plans and problems of the Moon-15 space probe is remarkable, but nevertheless has shared with America information on where the device goes to avoid possible collision when flying and landing.

While Neil Armstrong and the Buzz Oldrin took the first steps on the Moon, the Soviet probe went down on the surface of the natural satellite. The device has crash-landed about the lunar mountain and has been completely destroyed. 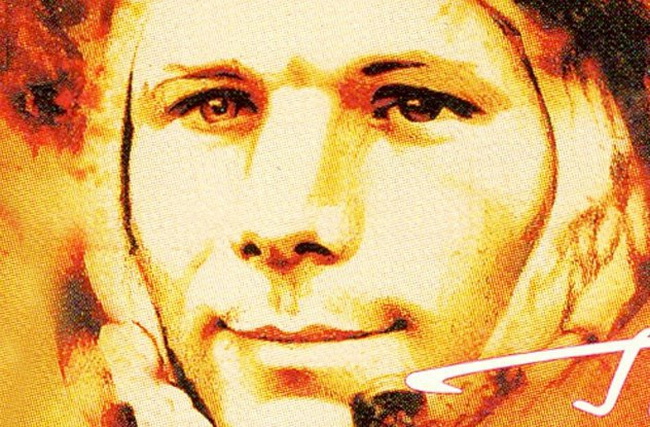 Before flight to the Moon between Neil Armstrong, the Buzz by Oldrin and Yury Gagarin’s wife the conversation has taken place. The first person who has visited space has died the previous year, and his wife has asked astronauts about one thing: to bring one of commemorative medals of the died husband to the Moon. This astronauts have satisfied a request, having left on the Moon, besides other medals and nameplates of other astronauts and astronauts, Gagarin’s medal.

Within the mission of “Apollon-15” the similar ceremony was held. The command of the spaceship has brought with itself to the Moon the plate with names of each astronaut and astronaut, dead for one reason or another. Astronauts thus have paid a tribute of respect and respect to those people, anyway thanks to which they are on the Moon now. The astronaut Dave Scott has told control center of space flights later that he within the mission moved behind a moon rover and has secretly dropped the plate and a small figure with the signature to “The fallen astronaut”.

The USSR went to salvation of team of crew “Apollo 13” 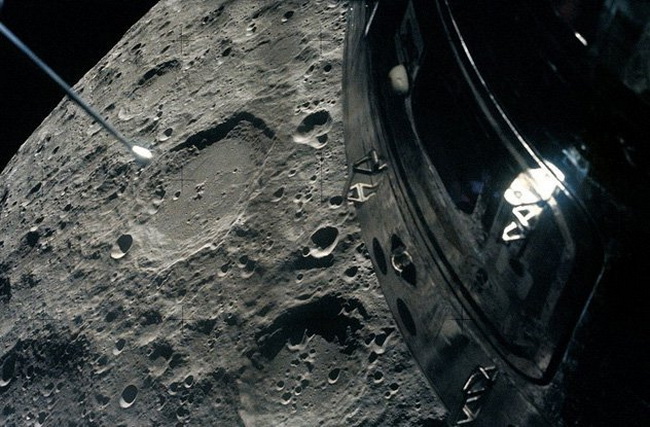 The mission “Apollo 13” failed. Fuel cells of the office module blew up, having carried away with themselves in space a half of inventories of oxygen. Nothing remained to team of a mission how to deploy the device and to try to return back to Earth live.

The Soviet Union learned about this incident and was ready to help. When the American device began to enter the atmosphere of Earth, in the USSR considered that waves of the Soviet radar stations can negatively influence emergency landing. Therefore the decision to disconnect all radio channels using one frequency with “Apollo 13” was made.

To Quiet and Atlantic oceans there were several Soviet ships ready to holding the emergency rescue operations. Eventually the module with crew was picked up by the American vessel.

The last mission of Apollo was held together with the USSR 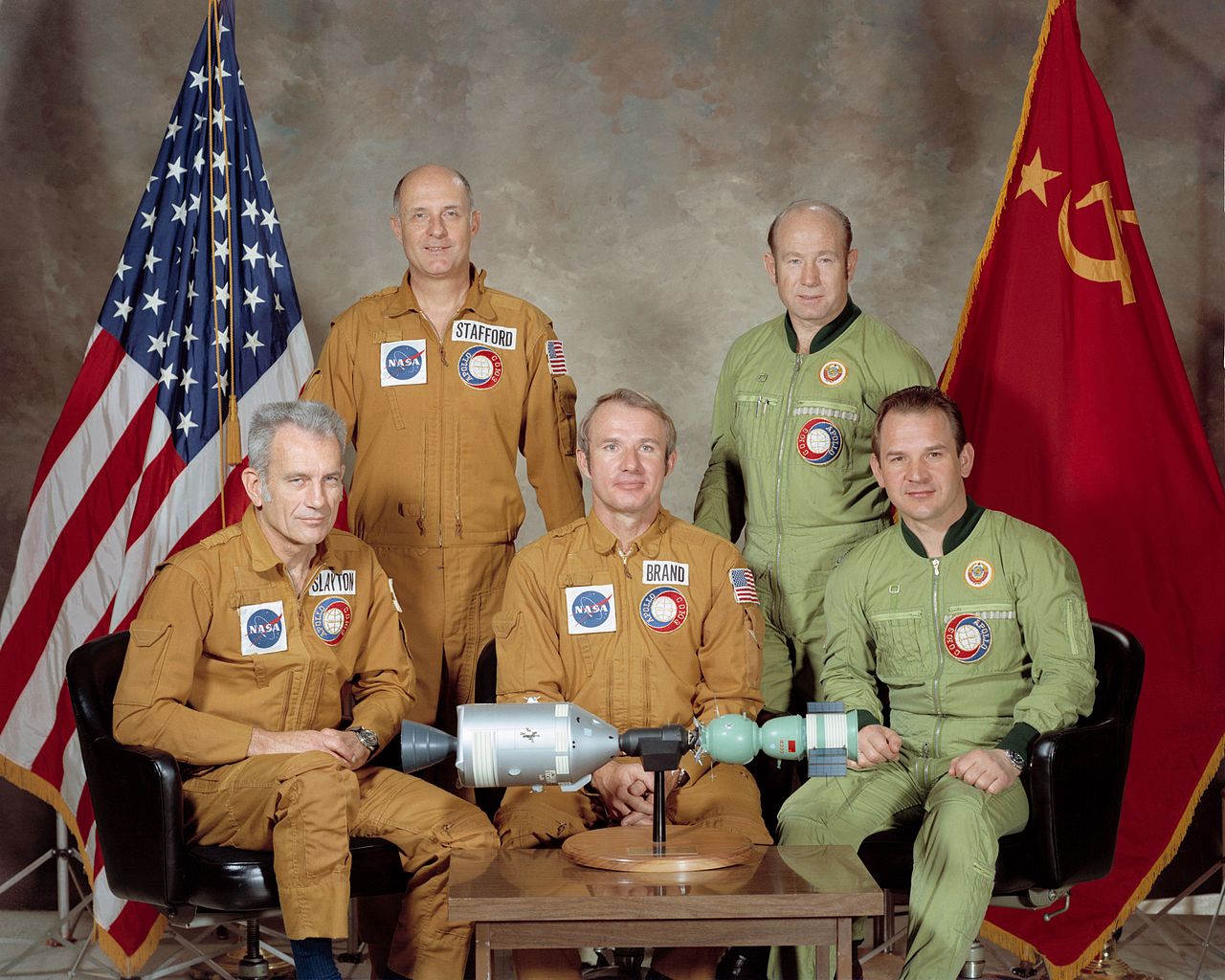 The USSR and the USA never flew to the Moon together, however the cooperation in space between two powers was. In 1975 the dream of the president Kennedy became a reality. The last mission of Apollo was joint, and in its framework was docked with the Soviet spaceship “Union”.

Two spaceships started with an interval of 30 minutes. In two days there was a joining. Within the next two days of team of both ships made joint scientific experiments then, отстыковав devices, returned back on the earth.

For more effective communication before flight both teams learned each other languages. Each Soviet astronaut learned English, and everyone American – Russian.

The USSR and the USA considered joint mission to Mars 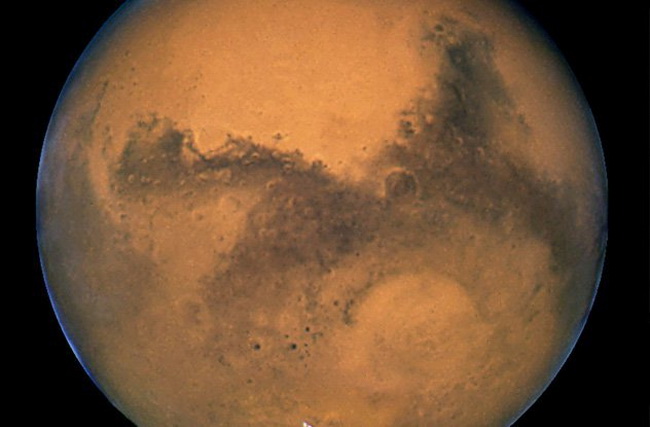 After Americans landed on the Moon, Gorbachev expressed desire in carrying out a series of joint unmanned space missions which key task was sending the spacecraft and a research of Mars by 2000. The idea found support in both countries, and the American congressmen even wrote to the president Reagan, calling him for a consent.

In 1988 the American side took the first step to implementation of this plan. They agreed to help the Soviet party to carry out start of the spacecraft to Mars in 1994. However within several days was decided to refuse this idea. Reagan was disturbed by excess finance costs. And then the USA in general ceased to be considered by the USSR as the main player of a space race.