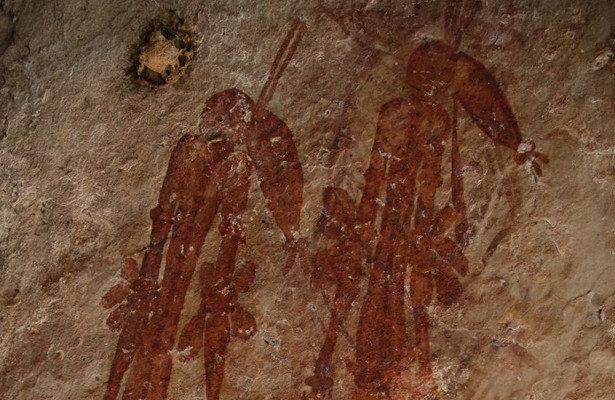 Scientists from the University of Wollongong clarified the dating of mysterious cave paintings discovered in Australia, and concluded that ancient authors in this way left notes on the chaos reigning on the continent after the end of the ice age.

The discovery report is published by Science. We are talking about cave paintings, which in the rocky area of ​​Kimberley in 1891 discovered an Australian farmer Joseph Bradshaw. They are some abstract “dancing figures” made by ocher. From the point of view of the plot, nothing like this has ever been seen anywhere else in cave art.

For many years, archaeologists did not know exactly who and when created these creations. Previous dates were very approximate, and the range of dates was very large. Until recently, it was believed that the drawings could be five, and 17 thousand years.

However, in a new study, scientists analyzed the fossilized wasp nests that insects built directly on ancient paintings. The first such attempt was made in the 1990s. By the way, it was then that scientists came to the conclusion that the age of drawings can reach 17 thousand years.

And only now it was possible to clarify the dating. The researchers did this thanks to the tiny pieces of charcoal that wasps used to build their nests. This coal succumbed to radiocarbon dating.

It showed that the real age of mysterious drawings is 12 thousand years, plus or minus 500 years.

It was also found that the style in which the drawings were made did not exist in this area for more than one thousand years, and this is a very short period of time by the standards of history.
However, scientists noticed that this particular time period coincides in chronology with the period of the rapid end of the ice age. Sea level rise led to flooding of northern Australia. Half of the Kimberley region has gone under water.

This led the researchers to conclude that the ancient artists actually depicted the chaos that swept the region then, leaving us with a kind of message and warning.