40 thousand years ago in Europe there was an unknown civilization 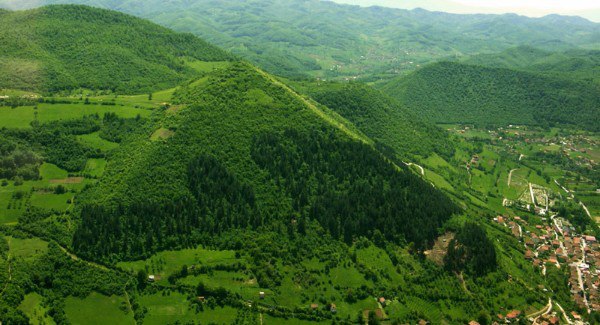 Archaeologist from Bosnia argues that in the centre of Europe 40 thousand years ago there was another civilization that disappeared for some unknown reason.

…In the depths of the pyramid reigns sinister twilight – the tunnel is dimly lit by dim light bulbs. One labyrinth into another, twisting spirals. The corridors stretched for 8-10 km, and Clearing is a slow and continuing without interruption for the past five years volunteers have to peck the ground and limestone. Cold breath. On top of dripping water. A beam of light from the flashlight rests on the stone is it carved runes and symbols resembling the letters E and Y.

The sun, Moon and Dragon

– We found a boulder not so long ago – explains the archaeologist, fixing her hat a La Indiana Jones. – It is believed that runes are letters of an ancient Germanic belong to the I century BC And the stone, according to the analysis, older Egyptian pharaohs. How could he get into the depth of dungeons Now look to the left where the flat plate. One-to-one – altar stone age temples in Malta. My colleagues, scientists from the universities of Milan and Trieste, include: the pyramid of the Sun built in total… a thousand years! But the main question is: who were these builders

51-year-old Away Osmanovich – doctor of sociology of the University of Sarajevo, member-correspondent of the Russian Academy of natural Sciences. In 2005, after a series of studies, he declared: forested mountain near the city of Visoko (30 km from the capital of Bosnia and Herzegovina) is actually an ancient 220-meter high pyramid, built by unknown civilization around 40 thousand years ago! Archaeological excavations began a year later. Almost immediately managed to establish that the mountain is composed of huge stone blocks (up to 2-3 m in height), the top of it are steps, at the foot of the road paved with cobblestones, and in the depth of cut terraces. Osmanagich announced at a press conference: only in the valley of Visoko have managed to find five of them, once built by the ancient architects in honor of the Sun, the moon and the unknown deity of a Dragon. All the buildings are connected by a network of underground tunnels.

– Our school explains: history does not exist anymore, this is simply impossible – smiling Osmanagich, pushing me further into the pyramid. But can we talk about what was happening on the planet 20-30 thousand years ago, if even in Second world war among historians debate God forbid, our civilization destroyed by natural disasters – other people who then populate the Earth, also will not know nothing about us, believing that sooner then lived only mammoths.

After the start of the excavations at Visoko scientific world split in half. True, without evidence is very difficult to believe that thousands of years in the middle of Europe stood the pyramids of an unknown civilization and no one paid attention to them. Even the Ministry of culture of Bosnia and Herzegovina, initially supported Osmanagich in 2007 quarreled with him, releasing an official statement, he says, the pyramids of stone do exist, but they are created “in the course of the natural formation, without human intervention”. Osmanagich in response landed in Visoko the team of specialists from around the world – as the Italian professors and famous Egyptologist Nabil Abdel-Colima. The visiting excavations on, said in the report: natural formation is not proven, steps and terraces nature is not forms – in fact, the “pyramid of the Sun is the world’s largest construction and 30 m for the height of the great pyramid”.

Civilization was killed by the explosion inside

Scientific battles continue: someone calls the doctor from Sarajevo hoaxer, someone- a genius of archaeology. I will say one thing: inside the pyramid is really impressive, its excavation work by hundreds of volunteers from around the world. The away Osmanagich personally took me through the underground maze – it is certain that in the depths of the pyramids existed the whole city. Particularly noteworthy: digging in the dirt, volunteers do not find any remains. No people, no animals, not even dead insects. Worms – and they are not found there. Osmanagic believes is evidence of a natural disaster that burned the Visoko pyramid from the inside. The mysterious inhabitants of a civilization, left the valley, as the Mayans for some unknown reason, fled from their cities in the Yucatan. Meanwhile, you know all the pyramids of the world are setup the same. Four sides of “miracle” Visoko in Bosnia is oriented to the West, East, North and South, and the Northern part is directed towards the Polar star – as well as the pyramids of Egypt and Mexico. But the stone carved with runes discovered during excavation columns and plates with a strange ornament. So what civilization many thousands of years ago were able to build such a colossus in the middle of Europe

– I’m doing research of the pyramids over the years, shining a flashlight, explains Dr. Osmanagich. – I can say that even in Egypt some scholars do not recognize the official point of view that the pyramids were tombs. No explanations, as in Ancient Egypt, without mortar, construction cranes, was manually built such gigantic structures. There is a pyramid around the world – not only in Egypt, Peru and Mexico. There are others – step pyramid on the island of Tenerife Africa, Mauritius, Indonesia, underwater pyramid near Taiwan. It turns out, these structures covered the entire planet. Who they belonged to and, most importantly, what serve?!