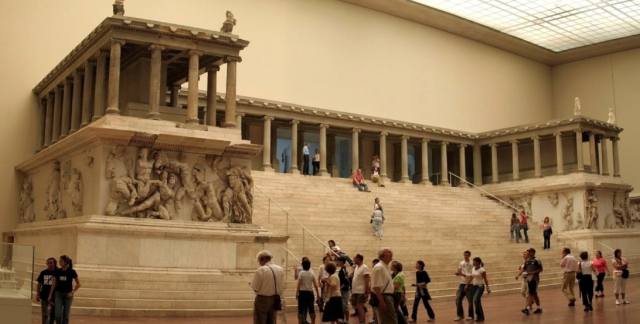 What secrets are hidden by the famous Pergamon altar?

This example of art of the Hellenistic era was found two thousand years after the Apostle John the Theologian wrote in his “Revelation” the words dictated to him by God: “And write to the Angel of the Church of Pergamon … you live where the throne of Satan is.” These theologians attributed these lines to the ancient city of Pergamum, whose inhabitants worshiped Asclepius, a deified healer. They sacrificed animals to him: rams, sheep, roosters, and most importantly – unwanted newborn children, literally buying themselves health. It is known that a huge serpent lived in the main Pergamon temple of the healer god, personifying Satan for Christians.

However, the name “Throne of Satan” is associated not with Asclepius, but with the Pergamon altar, which towered over the city on the hillside. For what reason this grandiose structure was created in the III-II centuries BC is still unclear. Some believe that as a sign of the liberation of Pergamum from the power of the Persians, others – that in honor of the victory in the war with the biblical Galatians.

For the first time, the builders of Pergamum turned the altar to the deity into an independent building. It was erected 25 meters from the summit on the southern side of the hill on which the main Acropolis of the city stood, and was intended for open-air ceremonies. From the steps of the altar, a beautiful view of Pergamum opened up and all the temples were visible.

The “throne” was a plinth of yellowish marble nine meters high, which crowned the U-shaped Ionic portico with a colonnade. A gentle staircase led to the sacrificial hall, and inside the colonnade there was an altar about four meters high.

A frieze with sculptural images of the battle of the gods with the titans stretched along the perimeter of the basement, and scenes from the life of Hercules’ son Telefos were depicted inside the sacrificial hall.

Were people killed at the Pergamon Altar? Probably yes. It was not for nothing that Pergamum fell under the blows of the innumerable hordes of Mohammedans, who destroyed the pagan temple. The townspeople used the fragments of the structure to build houses, and later the city was shaken by an earthquake of such force that the remains of a pagan structure were underground for many centuries.

The discovery of the Pergamon altar is associated with the name of the German engineer Karl Human, who in the second half of the 19th century was engaged in the construction of roads in Asia Minor. Having visited Pergamum in 1864, he realized that no excavations were carried out here, which means that there is a chance to become famous and get rich.

Human secured financial support from the Berlin Museum of Sculpture and received official permission from the Ottoman Empire, according to which he could freely export the finds to Germany.

Archaeological research has been carried out for several years and made Human a celebrity. When fragments of the Pergamon altar were found on the hillside, Human immediately realized that in front of him was a structure of unprecedented beauty and power, and tried to preserve everything that had not yet been destroyed. Parts of the foundation, columns and fragments of sculptures were packed on site, then transported on donkeys to the Mediterranean coast and from there were delivered by ships to Germany, where fragments of the altar were restored and collected.

After the restoration work was completed, Berlin was finally able to triumph: now in its museum there was an exhibit equal or even superior in value to the exhibits of the British Museum, which contained sculptures from the Parthenon itself. The British from the Pergamon antiquities were only miserable fragments – small fragments of sculptures were taken out in the 17th century by William Petty and were in the museum in the city of Oxford.

In 1886, at the anniversary exhibition of the Academy of Arts in Berlin, a life-size copy of the Pergamon altar was presented for the first time, which was the western facade of the basement with fragments of a frieze, among which the groups of Zeus and Athena stood out with special expression. The entrance portal of the altar was also recreated in the likeness of the temple of Zeus in Greece.
All connoisseurs of art were amazed at the perfection of sculptures by Pergamon masters. The outer frieze of the altar was a battle of the gods of Olympus, led by Zeus and Athena, with the serpentine titans, led by King Porphyrion. The Pergamonians understood the victory of the gods as the triumph of Hellenism over barbarism and put so much dynamics, feelings and energy into sculptural compositions that modern sculptors could envy them.

In total, there were about 100 figures on the frieze, each one and a half human height. 50 sculptures depicted gods and 50 – giants. The gods were located in the upper part of the high relief, the giants – in the lower.

Archaeologists managed to find out that the image on the frieze was created by one artist, but executed not only by different sculptors, but also by their different generations, which in no way affected the unity and integrity of the composition. Not a single fragment and not a single detail on the frieze was repeated twice. The sculptures were created convex, and the gods and giants are depicted not only in profile or full face, but also with curved and even twisted bodies. In many places the gods and titans literally burst out of the marble and, as it were, stepped onto the marble steps of the altar. The entire space of the frieze was filled with images – between the figures of triumphant gods and perishing giants, fluttering cloth of clothing, snake tails and fluttering wings were visible. In one place, the mother of giants, the goddess Gaia, grew up from the earth, begging the goddess Athena to spare her son Alcyoneus. In another, Athena herself triumphed, she held the giant by the hair, and the goddess Nike with the laurel crown of the victor rushed to Athena. In the third place, the mythical moirae finished off the giants Agria and Foant with their clubs.

From Berlin to Moscow

The reliefs of the Pergamon Altar were recognized as the best examples of Hellenistic art and not only made an indelible impression on the enlightened Europeans, but also became a model for the Nazis, who, of course, compared themselves to the gods of Olympus, who were at war with the subhuman barbarians. For the Nazis, the “Throne of Satan” was associated with sacrifice and heroic death. It is obvious that this “Love” of the Hitlerites to the Pergamon antiquity only consolidated the association with Satanism on the altar.
From 1912 to 1930, a museum was built in Berlin for the Pergamon altar, the facade of which became a giant copy of the Pergamon structure.

In 1936, the Nazis held a gala dinner at the Pergamon altar in anticipation of the 1936 Olympic Games. The Minister of the Interior of National Socialist Germany Wilhelm Frick and members of the Olympic Committee were present.

In 1937, the architectural ideas of the altar were used by the Nazis to create the Soldiers’ Hall in the building of the High Command of the Reich Land Forces. Nazi architects wanted to use the very idea of ​​the Pergamon frieze to create a grand monument to the fallen soldiers, but this project was never implemented.

After the victory of the USSR over Nazi Germany, the “Throne of Satan” was taken to the Land of the Soviets, and his sculptures were exhibited in the building of the Small Hermitage. In 1958, the altar was returned to the GDR, and exact plaster copies of its fragments were transferred to the USSR for museums.

There is still a myth in Russia, according to which the Lenin Mausoleum was created by the architect Shchusev in the likeness of the “Throne of Satan”. Supporters of this theory claim that the cutout on the platform on the right side of the Mausoleum was copied from the Pergamon altar, and the letters “Lenin” were allegedly written on the stone that lay at the entrance to the sacrificial hall.

The supporters of this theory will have to disappoint – there was no special cutout on the Pergamon altar, and it could not have been, since there was no tribune for the leaders on it.

As for the stone, the altar was created from yellowish marble, while the Mausoleum was built from red granite, black Labrador and blood-red Karelian porphyry. The stone with the name of the leader is a huge massif of black Labrador, which was brought from the Zhytomyr region. The initial weight of the monolith was 60 tons; after processing in Moscow, 48 tons remained in it. Obviously, the boulder was delivered from Ukraine with great difficulty, and this became the basis of the legend about the stone from the “Throne of Satan”.

So can the Pergamon Altar be called the throne of the unclean? Of course you can. But only among thousands of other pagan idols, on whose altars human blood was once shed.