A huge cat found in the desert among the Nazca lines in Peru, geoglyph 200-100 BC. BC 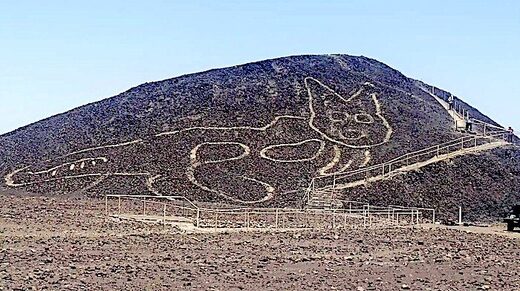 On the grayish-brown sands of southern Peru, covered centuries ago with geoglyphs of hummingbirds, monkeys, killer whales and a figure of a similar astronaut, a huge cat is now naked, sprawled on a hillside in the desert.

The Nazca feline drawing, dating from between 200 and 100 BC, emerged while working to improve access to one of the hills, which provides a natural vantage point from which many of the drawings can be seen.

The Nazca Lines, a UNESCO World Heritage Site since 1994, are made up of hundreds of geometric and zoomorphic images that were created by removing rocks and earth. They are located 400 km south of Lima and cover about 450 sq. km of arid coastal plain of Peru.

“The figure was barely visible and could have disappeared altogether because it is located on a rather steep slope, subject to natural erosion,” – said in a statement from the Ministry of Culture of Peru this week.

“Over the past week, the geoglyph has been cleaned and mothballed, and it shows a cat in profile with its head facing forward.”

The drawing of the cat is 37 meters long, with well-defined lines, the width of which varied from 30 to 40 cm.

“It is amazing that we are still finding new drawings, but we also know that there are still many more to be found,” said Johnny Isla, Peru’s chief archaeologist studying Nazca drawings.

The archaeologist said that the drawing of the cat was created at the end of the Paracas era, which lasted from 500 BC. up to 200 g