A mysterious ancient mass grave was discovered in southwest Karelia 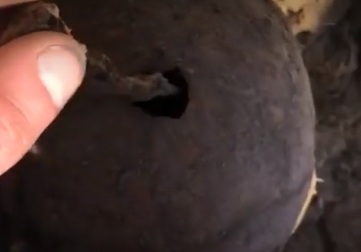 In the southwest of Karelia they have found a mysterious mass grave. Experts have established that it has nothing to do with the Great Patriotic War – the remains are much older. But the circumstances of death of the buried are shrouded in mystery.

The terrible discovery near the village of Tiurula has already been dubbed the main historical secret in Karelia. During landscaping operations in the ground at a depth of only about 30 centimeters builders found human skulls. The work was immediately halted, and the owner of the site contacted local search parties.

There was fighting in these places during the war, and the sanitary burials of those years are not uncommon here. But what was found by the searchers this time is not at all like their usual finds.

Firstly, the scales of burial are striking. By calculations of participants of excavation, remains not less than 220 people are raised. Secondly, not a single shell casing or bullet was found on the excavation site. But there are plenty of other gruesome and as yet little-understood details.

“The boards, in my mind, the feeling is that they were nailed to the bodies or the bodies were nailed to something, a fence or something else. And unfortunately, there are holes like that in the skulls. From square nails”, – the head of a museum of the Military Glory of the city of Sortavala Sergey Chernobaj explains.

And the most important thing is that among the found remains there are a lot of children. On the photos you can clearly see skulls the size of half a palm and tiny bones. Now the remains are in Petrozavodsk. Law enforcement authorities are investigating the case. A forensic medical examination is being conducted.

“According to the conclusion of experts, the time of death corresponds to the age of more than 100 years. To obtain a historical note on the possible causes of the mass grave in the framework of the pretrial investigation department investigators will be involved for interaction historians and archaeologists, “- says Inna Taratunina, representative of the Investigative Committee.

One of the versions connects found remains with the Russian-Swedish wars of XVIII – XIX centuries. Tiyurula settlement is located on the shore of a bay of Lake Ladoga, from where the Swedes attacked Russian settlements. And the age of the settlement exceeds five hundred years.