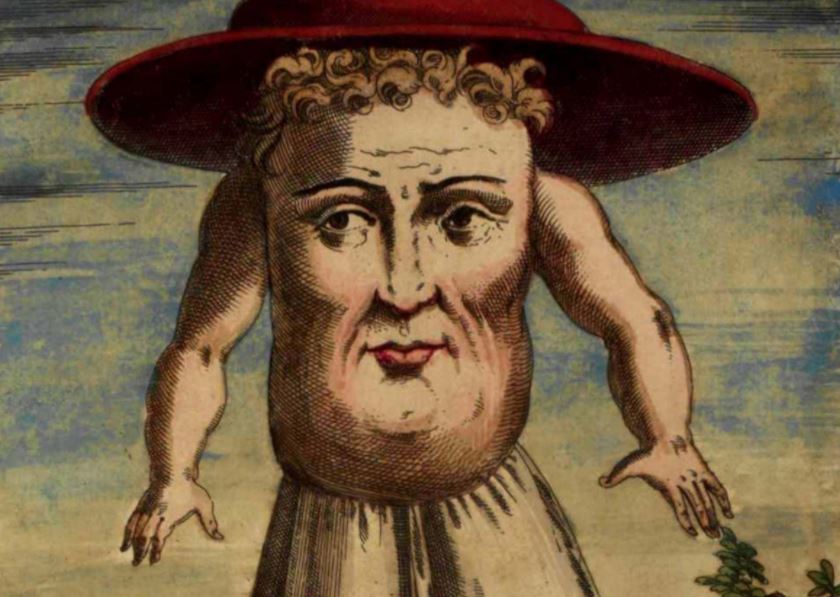 The Blemmians, also known as the Evaipanoma, were an African tribe of headless people who lived in Libya and Ethiopia. They are also described in ancient Roman histories, as they threatened Egypt (the Roman ) several times in the third century AD.

Their faces were placed on their chests, their name translated as “breast-eyes. An early indirect reference to the Blemmians is found in Herodotus’ Histories, where he calls them acephaloi (Greek ἀκέφαλοι “without head”).

In antiquity the tribe known as the Blemmians was named after King Blemis (Βλέμυς). Various medieval sources state that the Blemmians were between 1.80 and 3 meters tall. It is also often reported that they were cannibals.

Mela (Roman geographer, A.D. 43) was the first to call the “Blemmians” of Africa headless, with their faces buried in their chests. Pliny the Elder, in his Natural History, reports of the Blemmians of North Africa that they “had no heads, their mouths and eyes were placed in the chest. Pliny places the Blemmians somewhere in Aetiopia (in Nubia or its neighboring lands).

In the Roman d’Alexandre en prose, the headless tribe of gold that Alexander encountered were only 1.80 cm tall and their beards reached their knees.

In the French version, Alexander captures 30 headless men to show the rest of the world what is missing in the Latin original. Other books about Alexander that contain an episode with headless men are Thomas de Kent’s novel and Jean Vauclain’s chronicle. 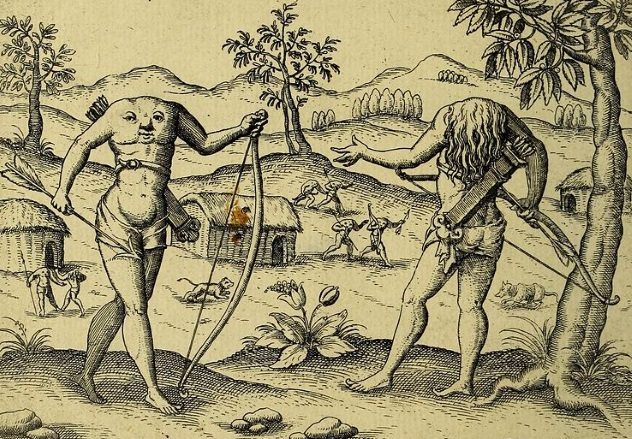 In 1211 A.D., an explorer named Hermes claimed to have found a tribe of “headless men with their eyes and mouth on their chests” living on an island in Ethiopia, adding that they were 366 centimeters tall. And 100 years later, Sir John Mandeville claimed to have seen them as well.

By the late Middle Ages maps of the world began to appear that placed headless people further east, in Asia, such as Andrea Bianco’s map (1436), which showed people who “all have no heads (omines qui non abent capites)” in India, on the same peninsula as Earth’s Paradise. 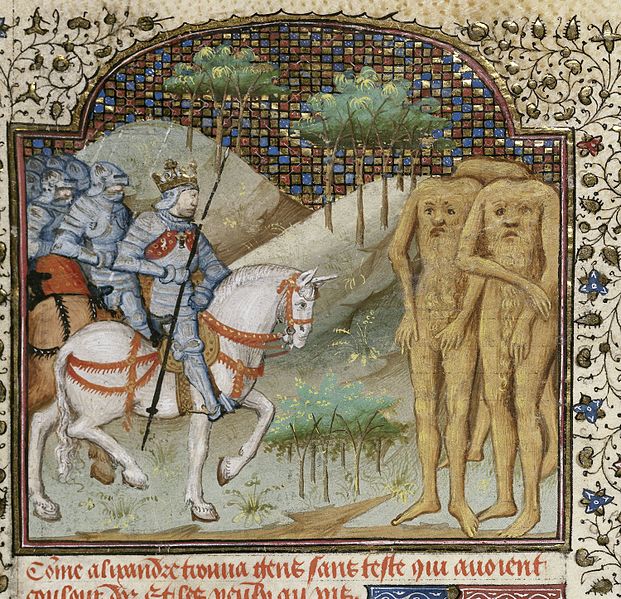 But other maps of the period, such as that of Andreas Walsperger (c. 1448), continued to place headless people in Ethiopia. Guillaume Le Testu’s post-medieval map shows headless and dog-headed cynocephals to the north beyond the Himalayan Mountains.

The Ottoman admiral and cartographer Piri Reis depicted blemmians in South America (off the coast of Brazil to be exact) on his world map published in 1513. Next to the drawing he explains, “These wild beasts reach seven spans in length. 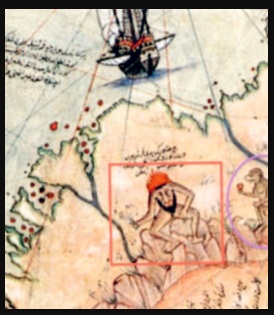 Ewaipanomas were depicted on numerous later maps using Raleigh’s account as a reference. Jodocus Hondius included them in his 1598 chart of Guyana and in a display various Amerindian peoples in a map of North America released in the same year.

Cornelis Claesz, who had worked alongside Hondius on numerous occasions, reproduced this display in a 1602 map of the Americas, but modified the Ewaipanoma to possess a true head but lack a neck, setting the figure’s head at the level of the shoulders.

Ewaipanomas began to decrease in popularity as a cartographic motif after this point; Hondius’ 1608 world map does not include them, but merely notes that headless men are reported in Guyana while casting doubt on the veracity of these claims. Pieter van den Keere’s 1619 world map, which includes a Claesz-like neckless figure in a display of Amerindian tribesmen, is the last to depict Ewaipanomas.