A race of giants on Earth 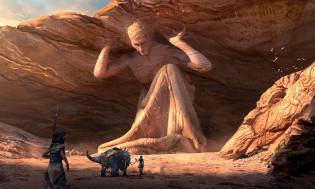 In the legends and myths of most of the world’s peoples one can find tales of giants. The pyramids of Egypt and South America and the megaliths of Europe are called cyclopean structures in honor of the one-eyed giants from ancient Greek myths. And even official history provides some evidence that once upon a time there lived on Earth giants that looked very much like humans.

Tangier, one of the oldest cities in Morocco, is located on the bay at the foot of the hills at the point where the Atlantic Ocean meets the Mediterranean Sea. The founder of Tangier is Antheus, who named the city after his beloved wife Tinga. Not far from this city is a hill Harf. In Arabic Harf means “hill”. According to legend, under Harf once was the tomb of Antaeus, who died in a battle with the Greek hero Hercules, who came for the golden apples in the garden of the Hesperides. According to ancient historians, Hercules’ battle with Antaeus is a historical fact.

In the 4th century B.C., the Greek writer Ephemerus argued that all Greek mythology is a statement of real events, and that all gods and heroes have specific historical prototypes. According to Ephemerus, in this way people tried to preserve for posterity the deeds of their distant ancestors. According to Pliny the Elder, the tomb of Antaeus was 16 meters long. The ancient Romans believed in its existence so much that, after taking Tangier, one of his generals ordered his legionaries to excavate the top of Harp, where many remains were discovered.

The claim that giants once ruled the earth is found not only in myths and legends, but also in quite authoritative historical sources. Historian Beros, who lived in ancient Babylon in the IV-III centuries BC. argues that there were three types of intelligent creatures on our planet: giants, amphibians and ordinary people. About the first wrote the prophet Moses in the Old Testament (Genesis, ch. 6, v. 4): “Giants were on earth in those days. And they were from of old men of distinction.” Where did the degradation of the giants begin. Beros does not report, or these fragments of his work on the history of Babylon have not come down to our time. But both Beros and Moses assert in one voice that the giants suddenly began to oppress ordinary people, were seen in cannibalism, and also in incest: “fornicating with their own mothers, sisters, daughters, boys, animals, disrespecting the gods and committing all kinds of lawlessness. For this God was angry with them and sent a world flood to the earth.

Another indirect evidence of the existence of giants are statues near the Afghan city of Bamyan. Five colossal statues, the first of which is 52 m high, according to esotericists, represents the First Race that has no physical body. The second statue, 36 meters high. – depicts the Second Race. The third statue, 18 m, immortalizes the fallen Third race, who conceived the First physical race, born of a man and a woman. The statue representing the First Physical Race is 5 meters tall and depicts the race of the Atlanteans. The last statue, slightly taller than modern man, represents the Fifth race, the modern race. It is believed that these figures were created by initiates from the Fourth Race, who, after the death of Atlantis, immortalized human history in stone.

Similar information is contained in an authentic Aztec work, the Codex Vaticanus. According to this document, four human civilizations successively existed on Earth. The first generation, a race of giants, died out of hunger, the second was destroyed by a giant fire. The third generation was swept away by a hurricane of extraordinary strength, and humans turned into monkeys. The fourth generation died as a result of the Flood. And only after the death of the fourth generation was the fifth, modern generation.

Mentions of giants are also found in the legends of the ancient Incas. During the reign of the great Inca Ayatarko Cuso, huge men sailed into their country on giant reed rafts. The aliens were so tall that even the tallest Inca could barely reach their knees. The giants’ heads were huge, their hair was black, their eyes resembled large plates, and there was no vegetation on their faces. According to some modern scholars, this description is very similar to the appearance of the Egyptian Sphinx. All of the above legends have a lot in common, which certainly makes you think.

In addition to legends and written sources, science also has some artifacts indirectly confirming the existence of a race of giants. In South America, in the area of the Ocovango River, during the excavations of ancient settlements huge axes and scrapers were discovered, and in the collection of the Historical Society of the USA a giant bronze axe 1 m long and weighing 150 kg is presented. The age of the find is estimated at 49 million years. African explorer B. Davidson describes the life of African giants as follows: “These giants were endowed with incredible strength. With one hand they blocked the flow of rivers. Their voices were so loud that they came from one village to another. When one of the giants coughed, it was like the wind blew the birds away. When hunting they passed hundreds of miles in a day, and killed elephants and hippos easily thrown on their shoulders and carried home.

Scientists determine the size of the giants, who could carry elephants and hippos on their backs, by their footprints. In the South African province of Transvaal on the Velde Plateau in 1912 a footprint of a human foot was found on a rock. The size of the footprint is 1.3 m long and 76 cm wide. This footprint of the left foot of a giant man is pressed into the rock by 15 cm. The granite is melted.

Much earlier, on the island of Ceylon, a right footprint was found about 1.5 m long and 80 cm wide. By calculation, scientists determined that a footprint of this size could belong to a person who is not less than 10.5 m tall!

On the territory of our country giants lived somewhat later. In the X century, Ahmed Ibn Fadlan, an ambassador of the Caliphate of Baghdad, visited the king of the Volga Bulgars, who was said to have had “a man of great stature. However when embassy has arrived on Volga, the giant has already strangled as tsar and his associates could not stand his spiteful temper any more. And in 1520 off the coast of Patagonia with the giants met and Fernand Magellan: “Suddenly we saw on the shore of the giant, almost naked. Even the most representative of us reached him only to the waist, besides, he was well built, with a very large face, colored with red paint.

Recent archaeological finds also confirm the existence of giants. In the Ella Valley, archaeologist Simon Dore discovered the skeleton of a giant who had been crushed by a blow from a rock. The skeleton is about 3 thousand years old and is 4 meters tall. And in the caves of Ecuador found 3.5-meter skeletons of the giants who conquered the Inca country at one time.

In early 2007, the public was shocked by a discovery in the Gobi Desert, where British paleontologists discovered the skeleton of a man who was about 15 meters tall! The age of the rock, in which the remains were found, approximately 45 million years.

After such facts itself suggests the conclusion that the existence of a race of giants was more than possible. Why “was”? A number of foreign experts argue that the elusive yeti Bigfoot is nothing more than a descendant of this very race…