A secret program of the CIA “Stargate” 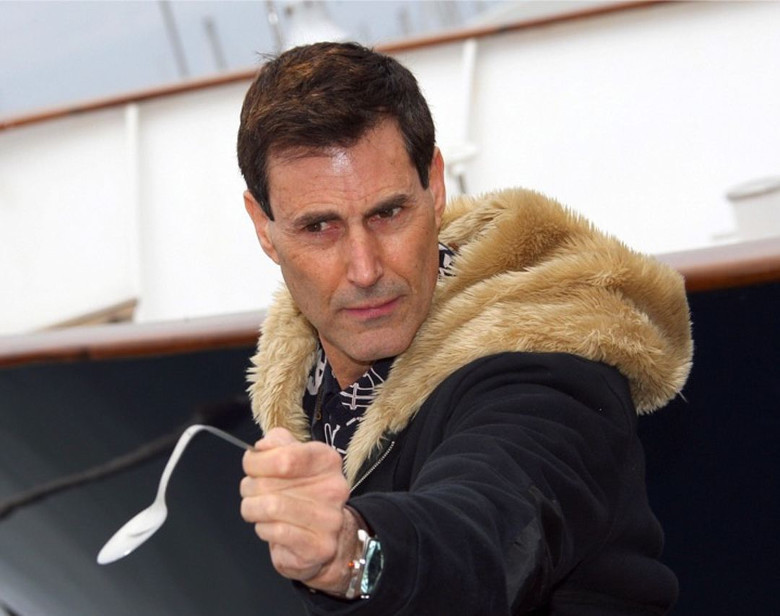 The CIA has opened free access to declassified documents, including research reports of UFOs and telepathy. In the public domain are, for example, the results obtained on the program “Star gate” (Stargate), in which CIA “experienced” URI Geller — the famous British psychic who was famous for having publicly bent look even tea and tablespoons, stopped the clock “big Ben” in London, forced to go stopped the alarm clocks around the world.

For starters, scientists randomly chose a word from the dictionary. The choice fell on the word “firecracker”, which was painted. Geller, who was sitting in the other room telepathically received the information. And reported that “sees” something cylindrical bearing noise. But drew in the end, not firecrackers and a drum. 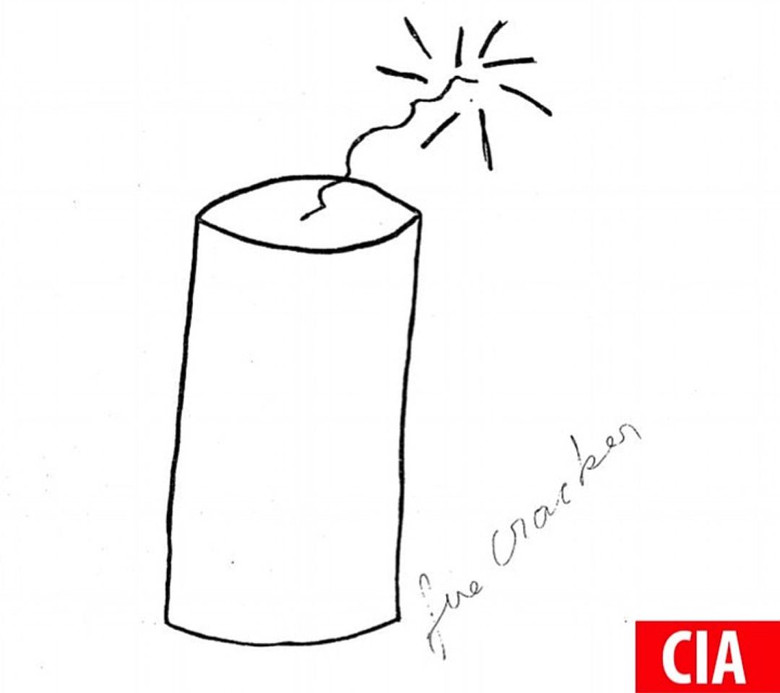 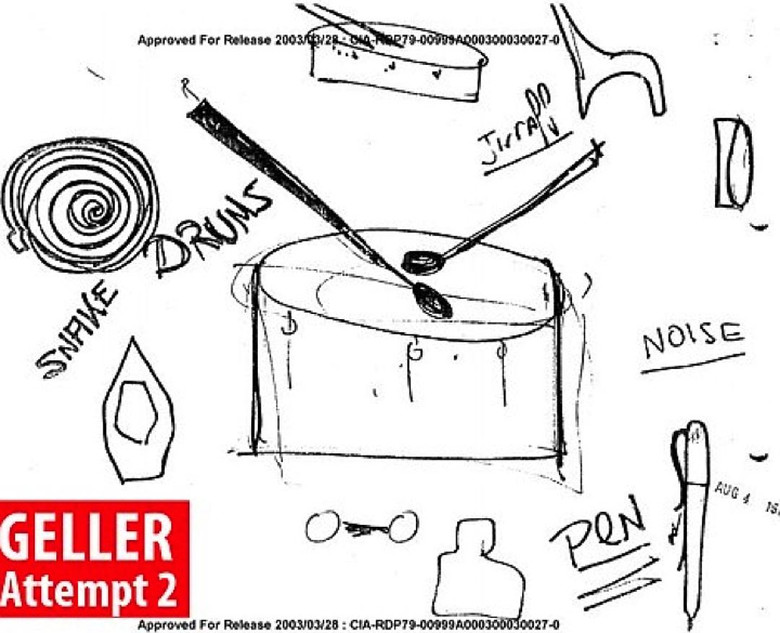 That’s what took and drew Geller

Next, the experimenters began arbitrarily — at its discretion – to draw pictures that Geller had to play, of course, they are not seeing.

The CIA drew a bunch of grapes. “Psychic” said that “sees” many, many some round drops. And drew a very similar bunch — have planned, and have played has matched the number of berries. They was 24. 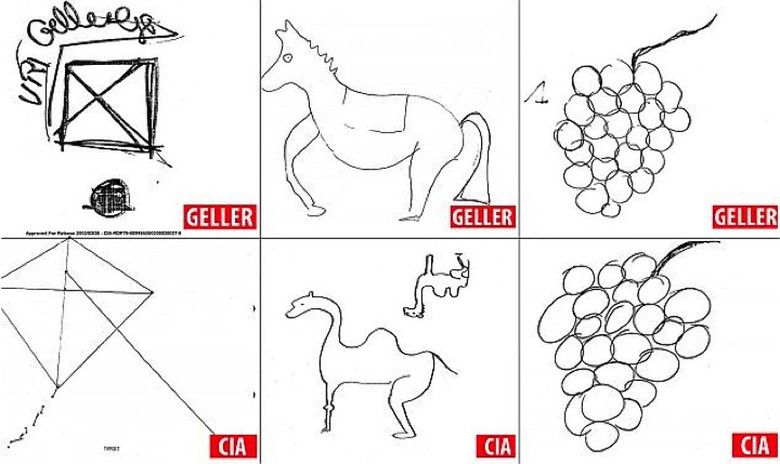 Down – transferring from the CIA, the top – reception Geller

The experiments were continued in the same spirit week. URI Geller has drawn a lot of mentally sent him pictures. And most of them reproduced correctly. At least the plot. It is very likely depicted the dove kite. A little “pumped up” his camel — two humps instead of creating Geller drew a horse.

The CIA scientist suggested: the subject does not copy mechanically the line “sent” him pictures, and plays it once processed in the brain received information. 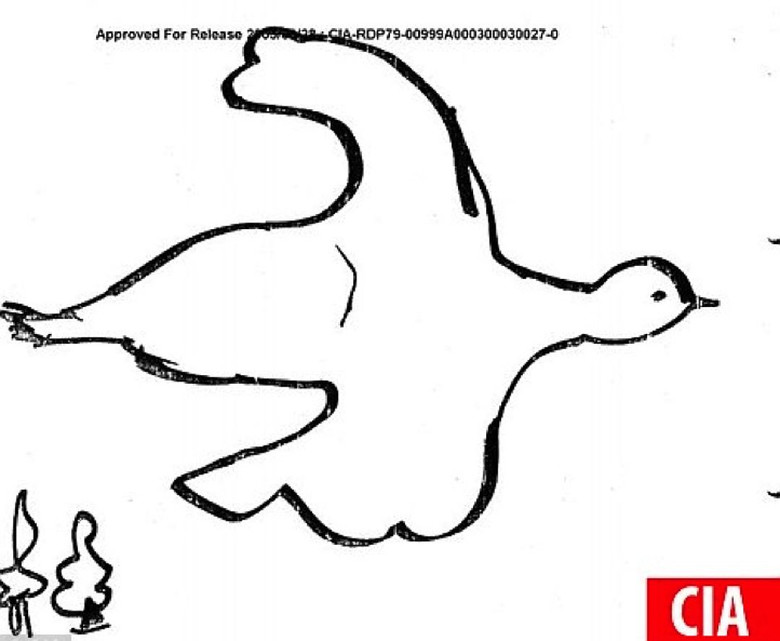 The picture is sent from the CIA 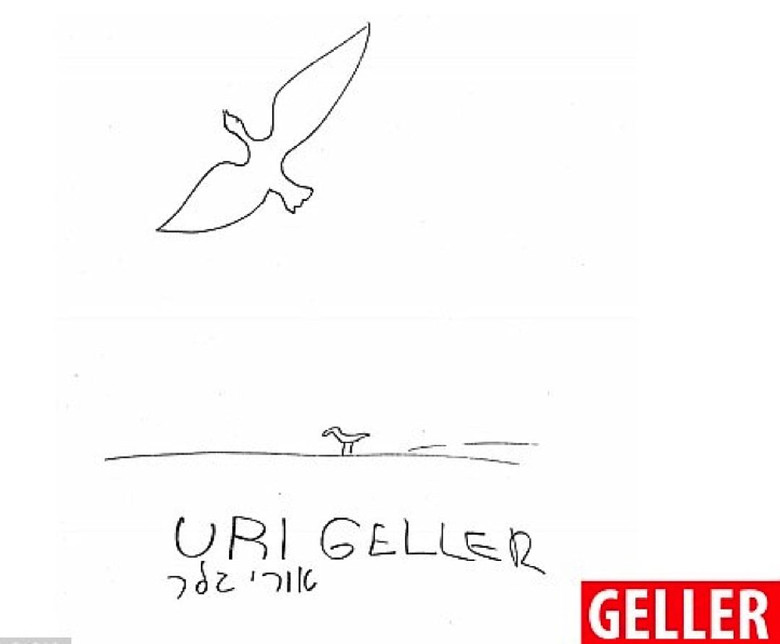 The CIA came to the conclusion that telepathy is a real phenomenon. However, the program “Star gate” closed. The experiments ended in 1998. According to the official version, the abilities of psychics disappointed scouts.

After all, it was assumed that telepathy can be used for hidden information transmission without any equipment, just from one person to another. But the accuracy is “accept” — especially long distance — was low. The same Geller couldn’t draw a suspension bridge, the image of which he “transferred” from another city. Although he faithfully reproduced the outlines of one of the elements by a curved line. 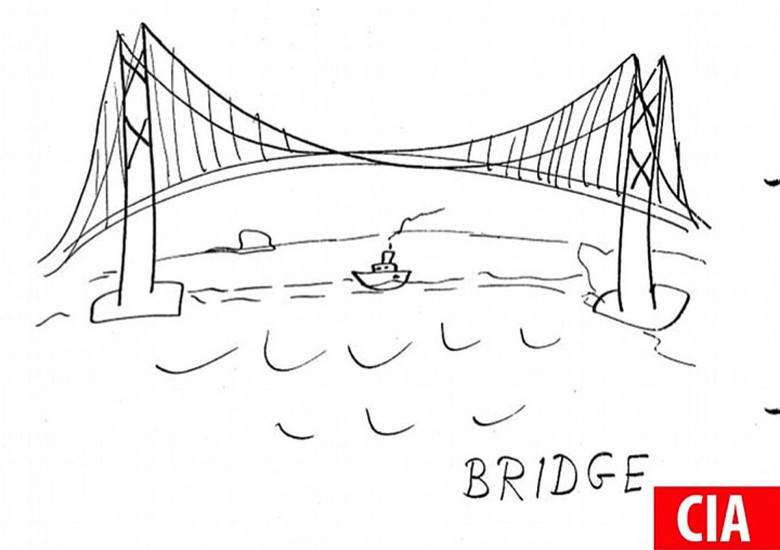 The bridge passed from the CIA 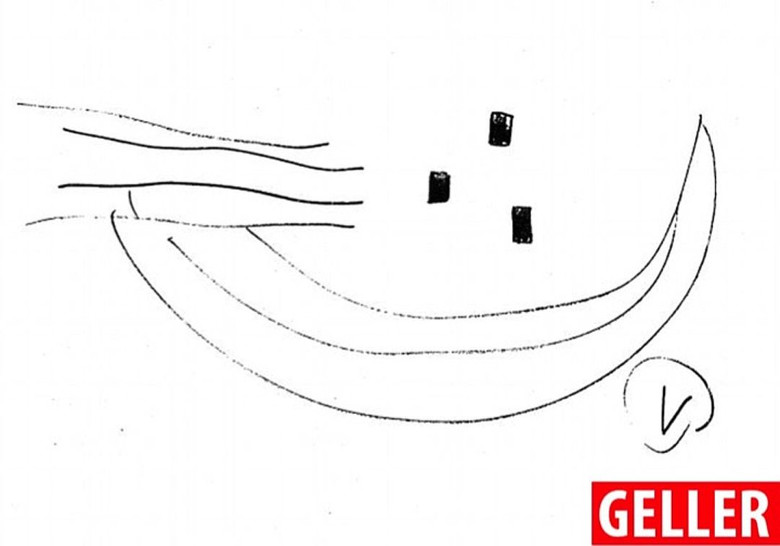 As such, the image of the bridge came to Geller

Almost failed another attempt to portray the devil. Get a set of different objects. But among them there was a Trident which was on the original picture. 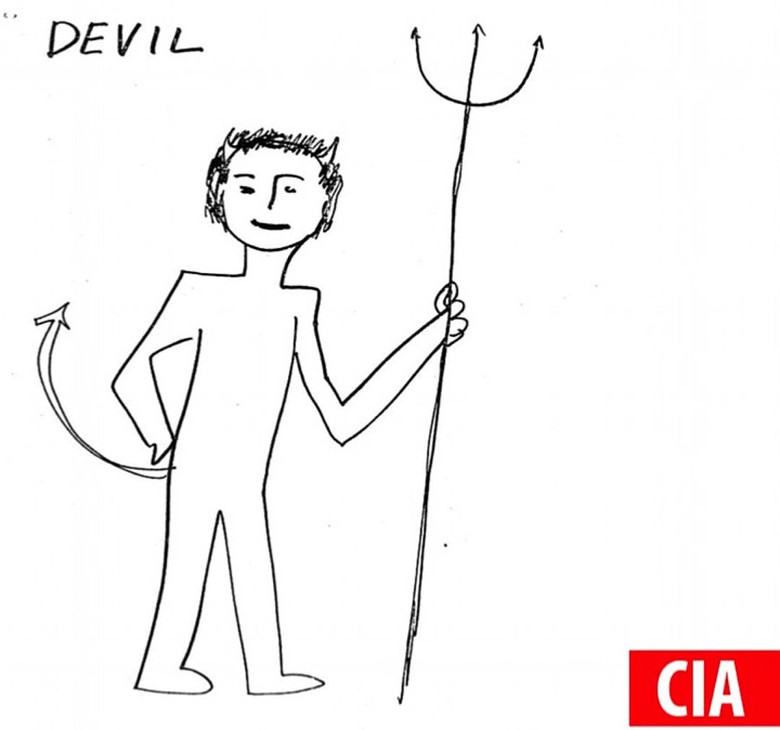 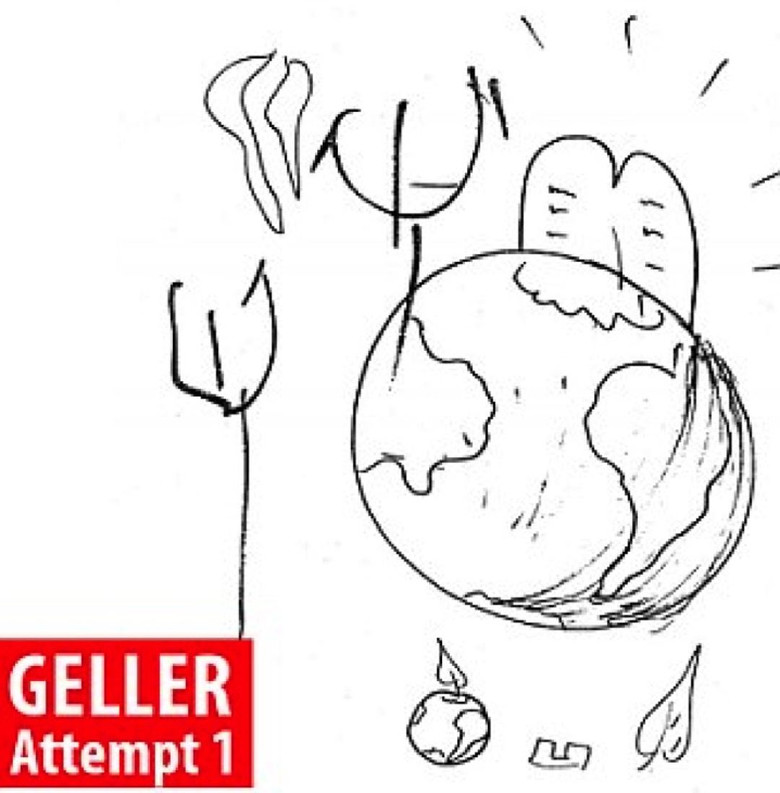 Heller has got from the devil was only a Trident

How can you not agree with the CIA and not to believe that telepathy does exist. And URI Geller, who demonstrated very compelling results, possesses it in some measure. 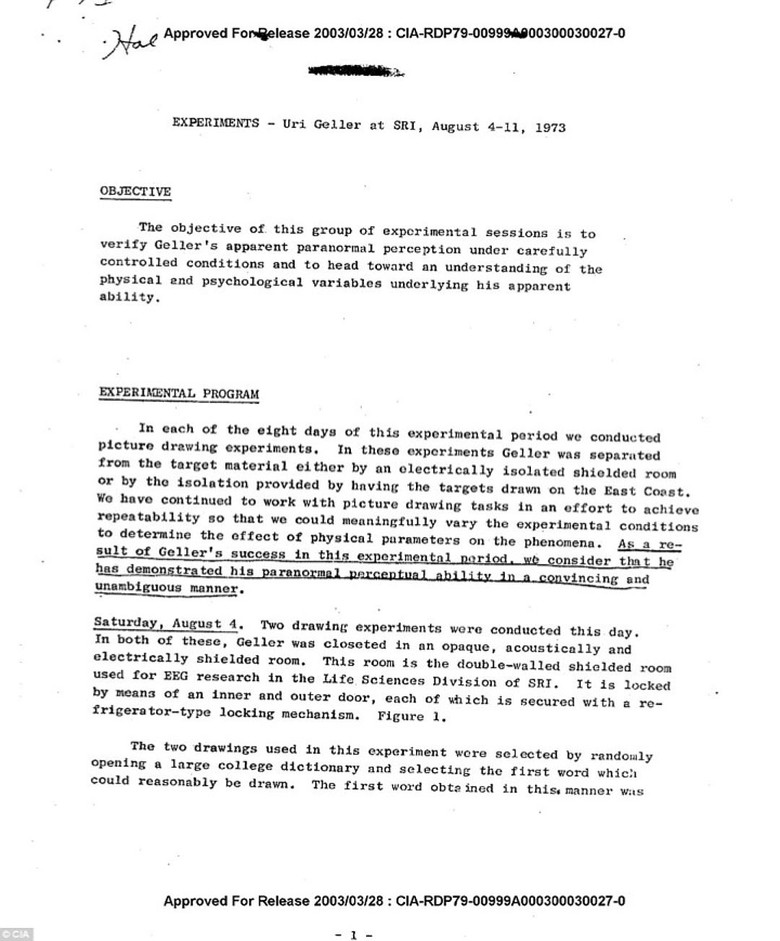 Journalists contacted URI Geller, who now lives in Israel. And he said that the CIA has declassified only a small part of the documents that concerned his work for the secret service.

– I did many things for the CIA, told Geller. Once they asked me to come to the Russian Embassy in Mexico city and wipe — remotely — floppy, produced by Russian agents.

– I was present near the places where politics were important negotiations on nuclear deterrence – confessed “telepath”. And inspired: sign, sign!

According to Geller, one of foreign intelligence services asked him mentally to stop a pig’s heart. Which he did, for some reason assuming that the far-reaching goal of this experiment is to remotely kill Andropov, who at that time headed the KGB.

And during the cold war, his “experienced” in the nuclear lab — tested, whether it can influence the rate of nuclear reactions.

Supposedly the Americans had an idea to telepathically influence of the Soviet atomic bomb to them to blow remotely.

Young URI Geller: the picture was taken just in the year when he was in the CIA

But he said that he was not embarrassed, to put it mildly, a cool attitude on the part of the skeptics – especially when he bent a spoon. Supposedly, the image of an eccentric magician served as an excellent cover for his core activities and espionage: the CIA and the Mossad.