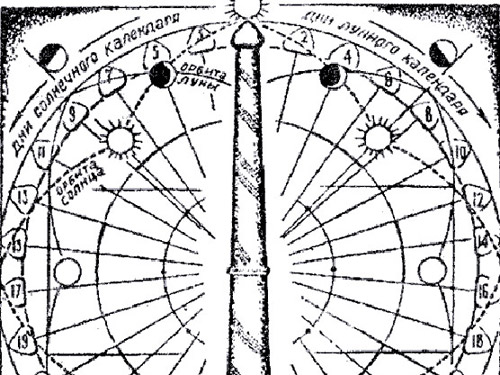 Archaeologists have found abundant evidence that in prehistoric times, people have shown great interest in the Sun, the moon, the starry sky. Siberia is of great interest for astroarchaeology discovered in this land of ancient artifacts.

Astronomy is closely related to a concept such as a calendar, because with the movement of the stars in the sky ancient people determined the time of year, because of natural conditions (change of seasons) were not always able to tell exactly what day or month. The mankind knows some ancient, incredibly accurate calendars – Aztec calendar, Mayan calendar round, caused a stir last December – ignorant thought he predicts the end of the world. There are still some calendars – the Sumerian, ancient Egyptian, and the like. But few people know that the people who lived on the territory of modern Siberia and the Urals many thousands of years ago, also had a calendar, no less mysterious than the same Maya calendar. And this calendar in the recent past was found. 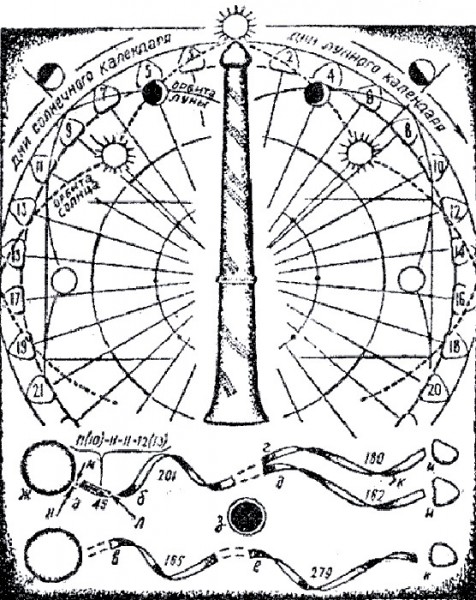 In 1972, doctor of historical Sciences V. E. Larichev began planning excavations in Siberia. The purpose of the excavations was the so-called Achinsk Paleolithic settlement. According to scientists, this is one of the oldest settlements on the planet, his age has more than eighteen thousand years!

During the excavation was made many valuable discoveries, that allowed us to understand how people lived in that unimaginably distant time. But one of the findings was literally sensational. This is the subject in the form of a wand, carved from the Tusk of a mammoth, beautifully polished. On the rod was located the rows of cavities of type of holes, forming a snake-like ribbon across its surface. These holes were of various shapes, all of them counted 1065 pieces, forming a spiral pattern. Apparently, these holes were made by the method of punching different ratefigure stone stamps.

Scientists have long puzzled what it is? What for the ancients was that rod? First, it was assumed that the subject is purely religious, then moved to the assumption that this is just an ordinary sample of human culture from the Paleolithic era. So, at least, seemed at first glance, but only at first. Rod decided to study in more detail and thoroughly, even examined under a microscope. And after that inspection and copying on paper the image of the hole has discovered that a spiral of holes not just a chaotic pattern, and clearly divided into separate strips, and these strips, in turn, are divided into zigzag stitching. When I calculated the number of stitches, it became clear that they consisted of a certain number of point pits.

The resulting series of numbers has forced] to further delve into the study of unusual finds. The first thing that caught his eyes after counting, it is the multiplicity of holes in all the strips in spirals to the number 3. well, almost all such laws are subject to not only a tape, numbered 173 and 187 (all tapes were numbered, for the convenience of calculations and future work). However, to say that this exception, too, is impossible, because at the base of the rod they are combined, and the total amount of holes is equal to 360. Accordingly, these tapes are also subject to the General laws – the multiplicity of the number 3.

What is this rod of this interesting work? What do all these numbers and patterns? Larichev suggested, which was agreed to by most scholars: the rod – the object of cult, and certainly not private. The rod is nothing like a calendar. It is only logical to assume that people with this Paleolithic site, where I found lots of discoveries proving quite a high level of culture and development, were supposed to exist in the regularly changing environment as something to them to adjust. And since the Julian calendar at that time simply had not yet been invented (or open – then everyone chooses for himself the most appropriate definition), then there had to be some other. What? Larichev have tried to answer this question, based on various sources, from ancient texts to modern books of independent researchers, who are still unknown to a wide circle of readers.

What Achinsk rod gave an inquisitive scientist to the idea that this calendar? The number of holes in strips spirals. It has a distinct character of the calendar. For example, the tape number 45 shows the length of one and a half lunar months and the eighth of the solar year, the film at number 177 – half of the lunar year and the number of days from the autumnal to the vernal equinox 207-I tape – half of the lunar year plus one month, 173-I – half of the so-called dragoncello year, playing a special role in determining the time of a possible Eclipse 187-I – number of days from the spring to the autumn equinox is the 273rd shows ten sidereal (i.e., star) lunar months, which equals three-quarters of the solar year. The number of holes in the tape 3 shows those three days, when the full Moon seen with the naked eye without any signs of damage. In the same calendar period known as the new moon, the Moon may not be visible on the horizon. Even the total number of holes – 1065, engraved on the surface of the sculpture – it’s not just the amount, it is three lunar years plus two days.

In addition, a detailed analysis of the holes showed that in some serpentine lines were formed engraved field of each of the ribbons spirals that revealed a certain numerical rhythm. We will not here now to lead, so as not to bore the readers with numbers, but the localization of numbers is noticeable that the number of holes in the lines at the transition from tape to the tape gradually increases, as if rigidly dictating the direction and order of transitions from line to line and from one helix strips to the other strips.

If you look closely, you can detect not only mathematical, but also a calendar feature of these numerical rhythms. In fact, all lines starting with the one that hosts the 43 holes, and ending with the one which has 70, also calendar. These numbers constitute the units of the lunar calendar from a half to two and one-third of the lunar month.

Was seen the fact that the tape time on the staff embody the symbol of the snake – the Keeper of wisdom and sacred knowledge. To unravel the mystery of an ancient scepter and use it as a calendar, you need to find the key to decrypting it. This key is the starting point, i.e. which holes and with a specific day to start the countdown. The prompt response of the ribbon 177-I 187-I, which reflect the calendar periods from autumn to spring equinox, and Vice versa. Since these tapes take a very definite place in the number series, it is clear that the ribbon number 45 should come in the summer, which was followed by the autumn-winter season 177th tape, spring and summer – 207-y, autumn-winter – 173-th, etc. Hence, it was concluded that the first hole in the row lines of the 45th tape reflect a day close to summer solstice on June 22. As to what it was a phase of the moon, it was considered reasonable to assume that the Orb of night was then in a state of full moon.

The imposition of the checks and experiments of modern astronomical calendar on the lines of the ribbons spirals showed that in compliance with the above conditions of the three-year lunar calendar of ancient people of Siberia began with three days of the full moon ribbon number 45 in June and after 1062 days ended in may three days of the full moon, which had to tape number 3. The brilliance and wit of the ancient calendar of the Siberian people is hard to pay tribute!

Scientists have concluded that the stick was not just the ancient piece of art depicting a calendar, but it was practically carried out in the calculation time. Moreover, the ancient inhabitants of Siberia were well aware that the lunar calendar can not long be used, because the backlog from solar soon will be so disastrous that there would be irreparable confusion with the seasons and the stability of systems of the account of time to fall to the ground. The exit is offered such: after three years the lunar calendar must add one extra lunar month, but this must be done so that the full Moon once again fell on the first hole of the ribbon under the number 45. After 18 years, that is, after a sixfold passage of the moon through the spirals of time, you must add two of the lunar month and with the same sine qua non for the transfer the night of the full moon on the first hole of the ribbon number 45. This will give the calendar on the sculpture from a mammoth Tusk sufficient stability, and it will become eternal!

So the scientists ‘ conclusion is absolutely logical: the people who lived in Siberia 18 thousand years ago, i.e. long before the formation of the Sumerian, Egyptian, Persian, Hindu and Chinese civilizations, had a perfect lunar-solar calendar.