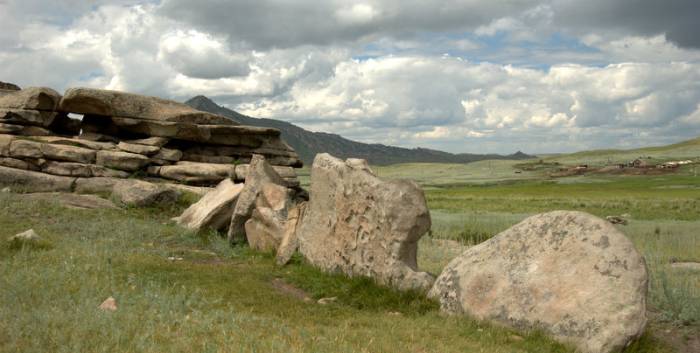 Left – step in the top of the forest, bottom – sand, right – mountains. East Kazakhstan is called “the continent compressed to the limit,” Ore Altai “gem” of the country. At the extreme Outpost Altai “Sinegorye” stretches the Kalbinskiy mountain range – the repository of ancient monuments. One of them – the mountain AK-Baur: a unique astronomical complex of the Neolithic period.

Clay Kazakh huts, wooden Russian house. The village with the Kazakh name Sagar was once the Lenin Library.

– Do you know where is mount Corimba, us AK-Baur is needed? – leaning half out of the car, turning to the young Kazakh, the plump shapes which are willing to show a white t-shirt with the inscription: “I’m star” and black breeches. 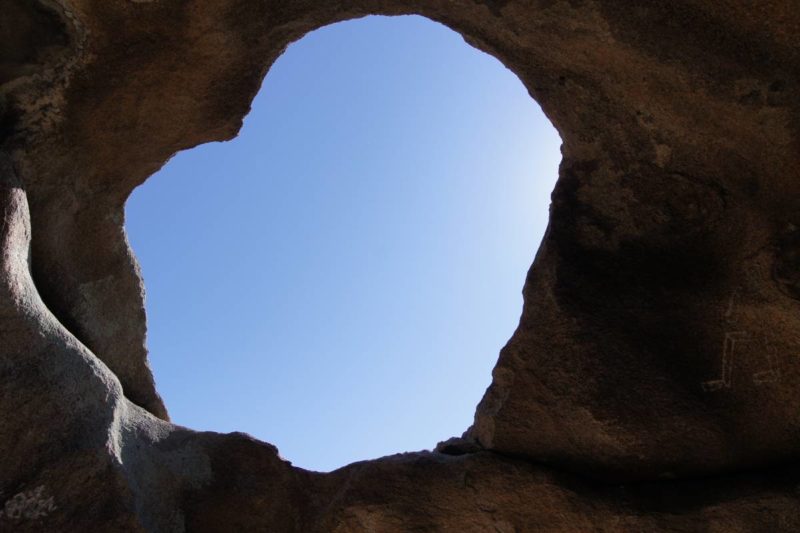 I don’t know, typical village of the Kazakhs tone of easy indignation that shrugs.

Paradoxically, the Kalbinskiy mountain range is so little studied that his heritage is not all know even in Kazakhstan, not to mention the rest of the world. But these mountains since time immemorial has been home to people of the stone age, so pellet local rocks are literally covered with petroglyphs, and the bowels of the earth keep the burial grounds, tools, remains of settlements and mine workings.

So sometimes translate the name of AK-Baur. However, the “Short Kazakh-Russian dictionary gives three translations of the word “bauyr” of the liver, blood relative and slope, the foot of the mountain. It is on the slope of a hill is a grotto with rock paintings made by the same assumptions, with red ochre, on the other– the blood of the sacrificial animals. Paintings of similar color not found anywhere else in Eastern Kazakhstan.

For the first time, this tract found the known Kazakhstan poet and artist Eugene Kourdakov. He called it “a temple under the open sky”. In his opinion, the ancient architects laid in the composition of the complex of AK-Baur model the way of salvation of mankind in the last ice age. Neither more nor less. But not surprising: we all know that the mountain was an object of worship of many early cultures, regarded as the abode of the gods. Recall, Olympus, Ararat, Sinai, Fuji, the legendary White mountain, the Celts, Crystal– Slavs or the emerald of the University – from Muslims. It seems that this list is meant to replenish and mount Corimba that in the tract of AK-Baur.

After passing the village of Sagyr, turn on the dirt road that leads to the mountains.

Some seven minutes, and the road ends in a settlement is exactly three huts and stables for horses, next to which hung drying range of children’s tights, predominantly red and blue colors. Because of the red-and-blue garlands immediately there is a grimy boy-Kazakh five years and, without blinking, stares at us.

– Right now, right now! – adjusting on the run scarf on head, from the porch of the house is popping up this latina.

The woman’s name is Gulya. She sits us in the car, shows the road at AK-Baur and says she is a cashier and collects money at the entrance to the grounds.

AK-Baur – an official historical monument, and soon we really come to a long fence, departing from both sides of the mountain. In the middle of the fence – gates and ticket office, similar to tin Soviet stall to sell soda. Extra money for the protection and improvement of historical sites the state does not.

– But at least became pure, clean, – holds out the ghoul tickets.

And next to rock paintings of the ancestors of the stone age ceased to be drawings of his contemporaries.

AK-Baur – big, something huge. There are many petroglyphs and other interesting things. But the most interesting – of course, the grotto of the same name.

First was the petroglyphs

In the dome of the cave is a gaping hole in the shape of a heart. At the end of it – the traces of manual processing. Apparently, our ancestors specially gave a natural hole in the rock shaped like a heart.

Many researchers believe that this “heart” was necessary in order to observe the starry sky. And someone says that the ancient priests made here, rites, after which the walls of the cave, there were new signs. The latter, incidentally, is the most that neither is the origins of ancient writing. Up to the present day survived about eighty drawings: several images of humans, animals, pictures of houses and carts, various symbols and signs and some, of course, see in these petroglyphs, aliens, spacesuits and spaceships. Not without it.

Based on the research of Nicholas Roerich, the Creator of the AK-Bauer, a poet and ethnographer Eugene Kurdakov said about these mysterious characters: “the ancient people of aesthetics did not exist. Ridiculous term primitive art. Then there was art. The whole spiritual life obey the rituals. The old shaman, muttering ancient spells, wrote these signs. Many are looking for miracles on Easter island, not knowing that the great secret spread throughout Eurasia. In the Altai there are a huge number of boreal, created seven thousand years ago, writing. Boreal is the time of the formation of writing. In this system, there were only 22 characters, but they became the basis of all alphabets of the world. Painted in AK-Baure – an example of the most ancient in the world of writing. This painting done at the end of the ice age. Collapsed the tower of Babel, the peoples were scattered across the planet, came out of obsesionado ritual and began to speak in different languages. But to preserve the memory of the path, which humanity has passed, the priests used the boreal iconic system. The priests of the whole of Eurasia was recorded with the help of this system the path of the people. The inscription AK-Barskogo grotto guide specifies the saving path – along the Irtysh river. For people who lived in ancient times, the Wurm glacial period, when life hung literally in the balance, a benchmark was, in essence, a sacred value.

In the grotto many crosses of different size and configuration. The crosses are the signs of the Sun. Therefore, researchers still tend to believe that we have a map of the sky. It’s incomplete, but important to southwest orientation of the sanctuary.