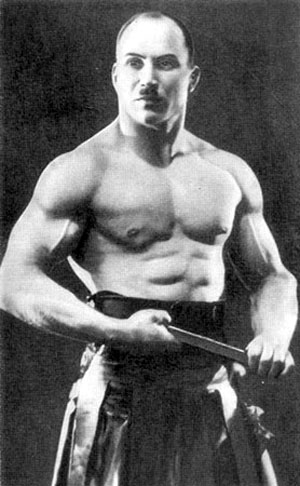 Alexander Zass was famous in the First world war brought the wounded from the battlefield underneath the horse. In peacetime acted as a strongman athlete in the circus under the name of Samson.

Since 1924 he lived permanently in England, where she went on tour in different countries. There he was awarded the title of “Strongest man of the Earth”. His height is 167,5 cm, weight not exceeding 80 kg, chest circumference during inspiration – 119 inches, biceps – 41 cm.

During the First world war, Alexander Zass was captured by the Austrians. Escaped three times, and on the third attempt he managed to leave Austria. But while he was in prison – performed squats, backbends, crow step, muscle tension (15-20 seconds exposure “included” muscles, then relaxation). And so many times in succession while bound hand and foot, the manacles tearing the skin blood biting lip from the pain. Gain strength, broke the chains and straightened the prison bars.

After the third escape from prison, was the man who made Alexander the contract will run for 20% and will get British citizenship. Sasse agreed, the main thing to get out of Austria, where the pharaohs had tortured his friends and at any moment can put them in jail for harboring. Under the terms of the contract Zass no longer exists, now appears mysterious Iron Samson. Under this pseudonym in the future, Alexander Zass acted, surprising his phenomenal strength.

Several decades of circus posters of many countries not going the name of the Russian athlete Alexander Zass, acting under the pseudonym Samson. Surprising was the repertoire of his power numbers – he wore on stage a horse or a piano with pianist and dancer, was situated on the cover, caught by hand 90–pound -, which were fired from a circus cannon from a distance of 8 metres off the floor and held in the teeth of a metal beam with sitting at the ends assistants, pull the Shin of one leg in a loop of rope, fixed under the dome, held in the teeth of a platform with a piano and a pianist, laying bare back on a Board studded with nails, kept on the breast of stone weighing 500 kilograms, which of the public wishing to beat hammers, in the famous attraction of the Man with the ball he caught by hand assistant, escaping from the crater of a circus cannon and describing the scene over a 12–meter trajectory.