In early August 1608, the inhabitants of the Italian city Genoa enjoyed the beautiful summer weather on the coast rested a lot of people, when suddenly started to happen strange events. In the sky above the sea there are three flying object elongated and oval, which came closer and hovered on the coast fortifications of the fortress.

Then all three objects fell to the surface of the water near the shore and the water beneath them began to boil, rising yellow-orange pairs. And according to eyewitnesses it was accompanied by a thunderous boom. On the waterfront is a large crowd watching the proceedings.

Shrouded in clouds of yellow vapor aircraft continued to hover over the water, when one ship appeared two humanoid figures dressed in strange costumes of red, and one alien looked like a woman but was covered in shiny scales and silver color and with a head like a dragon. 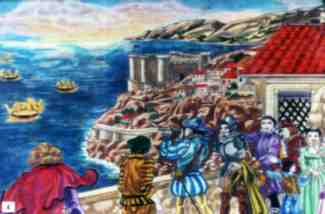 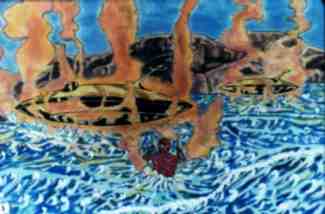 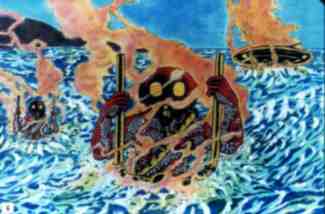 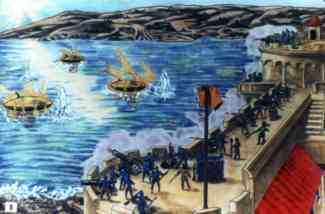 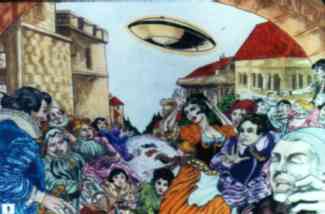 Figures in red suits, had a huge round head, which was nothing except the two large round holes similar to bright eyes. Figure they had weird hands sticking out in different directions, and according to eyewitnesses was from a distance like the scales.

These strange aliens were holding some sort of long tube like snakes as they writhed and walked from the hands to the place where the person is the navel, and then holding the tube vertically, they jumped in the water and a few hours of swimming around their ships, sinking under the water, rising to the surface.

Ladies fainted, many of the residents rushed to the Church to offer prayers to the Lord, and the soldiers stationed in the fortress received a command to open fire from the guns of the devil’s creatures. The fortress artillery fired 800 shots at uninvited guests, but they didn’t even pay attention to the roar of cannon and continued to sail on its ships, and cannons did not cause any of the aliens or their ships no harm.

With all this, they totally ignored the audience on the shore a crowd of local residents, and then out of the water and climbed into his flying machine, which then flew into the air, quickly picked up speed and disappeared on the horizon. Flying objects observed in Marseille and even nice. All this happened on 5 August 1608.

After seeing the townspeople have fallen into ecstasy, many predicted the end of the world and the people EN masse have made processions with prayers. And August 15, the flying ships return.

Over the sea there are the same three flying ship, which was carrying six other ships that were on fire and looked like dragons. All this flying Armada approached Genoa, and their flight was accompanied by an appalling sound which shook the earth and the mountains. The vehicles stopped and one began to approach the shore. 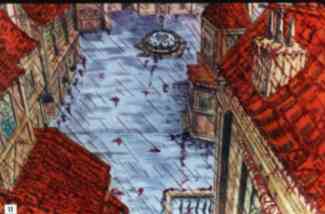 Crowds gathered at the shore panicked and ran. In the crush, trampled several people, several ladies died from fright, and flying ships three times flying along the coast. Him again, opened fire from guns, but it didn’t cause flying ships no harm, and they in turn paid no attention to the shooting and no damage received.

Then the whole Armada of airships with a terrifying roar at speed and departed towards the East. A few days later one of those flying ships appeared above the fishing village of Martigues, which was located not far from nice. The ship flew over the village several hours, then fell, and he went out two figures in red suits, which again, was doing something in the water under his hovering over her boat.

After all these events, from the coast of Genoa to Provence from the sky was pouring bloody rain, all around filled with bloody rain, leading residents to fear. Red steel all the trees, and in Toulon, even all the buildings are painted in red. Blood painted the roof, walls and even the Church.

The Church was full of worshippers and performed the prayer for deliverance of the people from the horrible signs. 18 Aug and 20 Aug bloody rains continued. Citizens were afraid to walk down the street and hid in their homes.

The whole coast from nice to Marseille was filled with streams of bloody rain, caused a real flood on the streets. 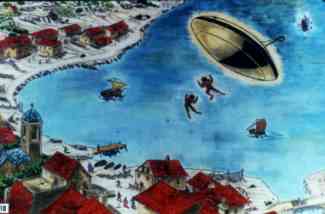 On 20 August over the city of Martigues appeared in the sky two flying humanoid figures who were holding weapons and shields. Then they began to fight with their weapons and beat them on the boards, all this was accompanied by a terrible rumbling and sounds that drew residents in the stampede.

22 Aug the flying the same two people appeared again. This time they fell to the ground and began to fight.

August 23, these same aliens were the battle sitting on some creatures similar to horses.

24 August, they appeared in some railway carts sitting inside them, they again fought. One of the FORTS fired a shot and there was a roar as of cannon firing all around swayed and shrouded in smoke. All around the cinched black clouds that have closed all around and around has spread the smell of sulfur, and when the clouds cleared, the people saw no fighting warriors or their iron wagon-fortresses.

All these events made a lasting effect on people who thought it was a sign that they have angered God and soon will come the Apocalypse. Of the events was written in two manuscripts that have survived to our times.