Americans on the Moon – Impossible sounds in a vacuum 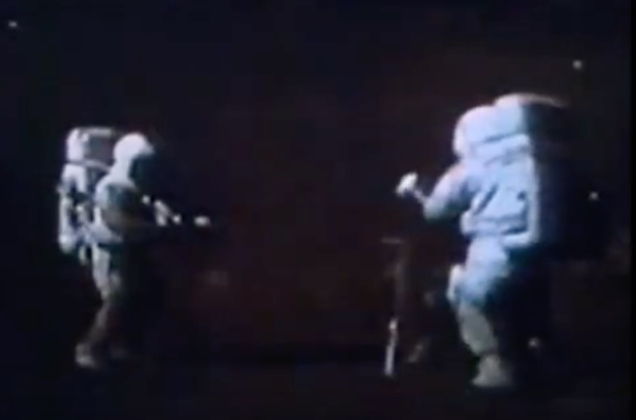 Mission “Apollo 15”, the famous landing of NASA astronauts on the surface of the Moon. Jumping, riding a lunar car and other special effects, which took a great interest so that in one of the videos of this mission, we see two astronauts, one of which hammers an iron pin into the lunar surface. We hear the conversation of these two astronauts and the sounds of hammer blows on the pin.

Probably this circumstance does not bother anyone if it were not for one big thing: BUT: Sound in space is not audible, there is an airless environment, and there can not be air fluctuations in it. The connection between these two astronauts located on the surface of the Moon is carried out by radio communication, through microphones and headphones installed inside the spacesuits. If there is no sound in the vacuum, then the question is – how did the microphone installed inside the suit, recorded the sounds of hammer blows on the stick that occurred outside – in an airless space.

Apollo 15 is the ninth manned spacecraft in the framework of the Apollo program, the fourth landing of people on the moon. The commander of the crew, David Scott and the pilot of the lunar module, James Irwin, spent almost three days on the Moon. The total duration of three exits to the lunar surface was 18 h 30 min. On the Moon, the crew first used a lunar car, passing a total of 27.9 km.