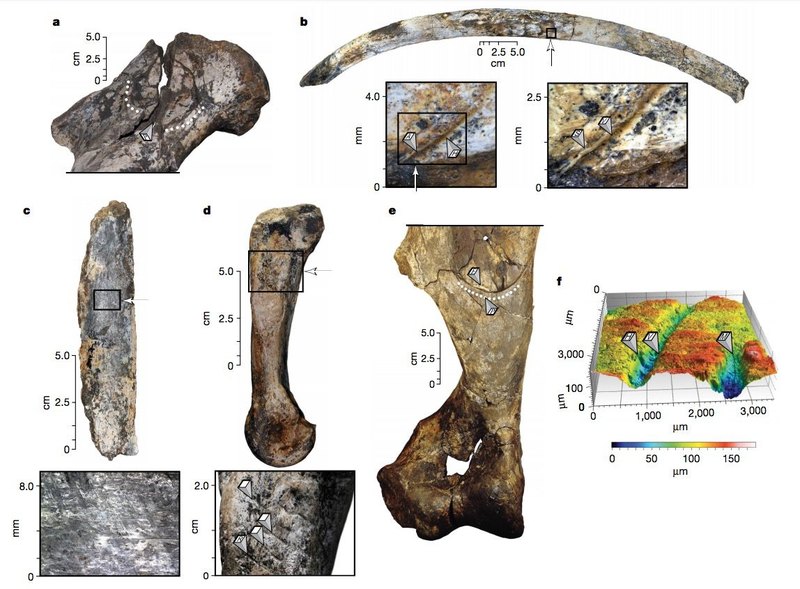 Recently, a skeleton of a rhinoceros with obvious traces of the impact of primitive tools was discovered on one of the islands of the Philippines. This proves that the human ancestors crossed the ocean as much as 700,000 years ago.

The research team discovered a skeleton of a rhinoceros in Kaling, a Philippine province on the island of Luzon. An article published in Nature notes the fact that the skeleton has well-marked traces of carcass processing with stone tools. It would seem, quite an ordinary discovery, if not for one “but”: the age of the skeleton is about 700,000 years!

According to the anthropological conception, during this historical period in the region the ancestors of modern people had no idea how to make tool materials from improvised materials.

Now it is clear only one thing – hunters did not belong to Homo sapiens. In addition to our direct ancestors, Neanderthals and Denis people are also members of the hominid family, but the roots of the evolution of mankind go much deeper. The most likely candidate for hunters scientists consider Homo erectus, which disappeared approximately 140,000 years ago. The nature of the tools used to treat the carcass partially confirms this theory.

The Philippines is an isolated chain of islands in the Pacific Ocean, which in the times of Homo erectus could only be reached after a long and dangerous journey on a reliable boat. How could a distant ancestor of a man make such a trip?!. But, nevertheless, the bones of the rhinoceros are irrefutable evidence of the impossible.

Why did the researchers decide that it was the people who killed the rhinoceros?

Scientists managed to reconstruct the tools, which hunters processed the carcass. These are well-known stone scrapers, fragments of which were found during excavations and which correspond to small scratches left on the bones after scraping meat and skin from them.

For carnivores, the scratches are too deep, and the special shape of the incisions indicates that this is the result of the activity of a creature holding a primitive weapon. The lead author of the study, Thomas Ingicco, notes that the remnants of the rhinoceros also found traces of the impact of the environment, which are very different in nature from the traces left by the human ancestors. The most striking example is the marks left by a stone point – there are simply no animals in nature that could leave such a mark.

The scientific community is enthusiastically discussing a new discovery. Briana Pobiner, a research scientist at the Smithsonian University, who studies the diet of the first people, refers to the discovery as “an exciting discovery, which is confirmed by well-known scientists signs of obvious human activity.” According to Briana, it also serves as evidence that by some miracle at least one species of hominids still managed to travel by sea in the Middle Pleistocene. By the way, hominids hunt for rhinos about 2,000,000 years ago!

Migrating the ancestors of man has always been the subject of heated scientific debate, but, apparently, Homo erectus really lived on the eastern lands much earlier than other species. The first evidence of the appearance of Homo sapiens in these regions is about 300 000 years old, so there is indeed a huge historical abyss between them. The brain of Homo erectus was much smaller than the brain of Homo sapiens, which did not prevent them from crossing the ocean and quite successfully hunted large, dangerous animals. The new discovery once again demonstrates how little modern people actually know about the realities of long ago eras – how to know, maybe in the future archeologists and paleontologists will be able to uncover other riddles of the past that now seem incredible to us?