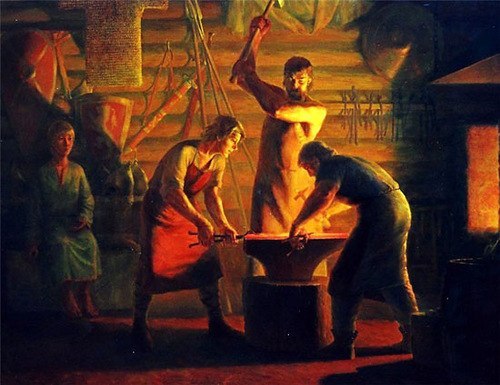 “Studies have shown that by the twelfth century, when the construction of the Staraya Ladoga fortress, Staraya Ladoga’s inhabitants were able to smelt copper from local raw materials”, – said the head of the expedition.

The ancient artisans of the tenth to TWELFTH centuries had already mastered the technology of smelting copper from inclusions of the metal in the rock of limestone, which allowed them to use local raw materials along with imported. It was established by the specialists of the Staraya Ladoga expedition of the Institute of history of material culture Russian Academy of Sciences (IIMK ran), working in the ancient capital of Russia – Staraya Ladoga.

“Studies have shown that by the twelfth century, when the construction of the Staraya Ladoga fortress, Staraya Ladoga’s inhabitants were able to smelt copper from local raw materials”, – told TASS the head of the expedition, Director of the Institute RAS Vladimir Lapshin. According to him, this discovery disproves the old notion that medieval artists of Ancient Russia worked only with imported non-ferrous metals, which comes in Ladoga along the trade routes of the Ural region or England.

“During the excavation in the field season of 2015 on the territory of the fortress were found traces of copper smelting, the composition of which differed from the usual for these places of alloys from imported raw materials, – said the scientist. – Archeologists of the Institute of RAS together with geologists examined the limestone from which was built the fortress, which was discovered specks of copper. The experiment was carried out in the course of which managed to melt copper technology masters of Staraya Ladoga and to obtain the pure metal, which proves the possibility of using the old Ladoga masters of his own material for copper production.”

Scientists believe that the production of local raw materials began in the Poconos, not later than the tenth century and were constantly, though in small amounts; most likely, it was in the nature of the parallel fishery, the metal used, for example for making jewelry. “It can be assumed that this process was associated with the construction of the fortress, which this year celebrates its 900th anniversary, – said Lapshin. – However, to fully provide for themselves metal because of the production Ladoga could not, and imported raw materials for craftsmen basic”.

Archaeologists will continue research during the beginning of this week, another, of the 43rd season of excavations of Staraya Ladoga expedition of the IIMK RAS. It will work well as students of the Leningrad regional University, Nizhny Novgorod state University and volunteers. Will be conducted excavations have destroyed at the end of the XVII century Tehnichnoi tower of the old Ladoga fortress. These studies are needed to continue the restoration of the fortress, which in the next three years will be allocated 525 million rubles from the Federal budget.
Place calling the Vikings

Russian Chronicles tell about the Poconos as a place where in 862 the Slavic and Finnish tribes was called the Scandinavian Prince Rurik and his brothers. Ladoga (dripstand. Aldeygyuborg) became the first capital of the United Northern Russian States, and Prince Rurik founded a dynasty, which ruled Russia until the end of the XVI century.

In the first centuries of its existence Ladoga was one of the most important ports on the Baltic-Dnieper and Baltic-Volga waterway. In the Viking era there lived Slavs, who came, according to the latest versions of scientists, from the basin of the Western Dvina river in Belarus, as well as the Scandinavians, Finns and other peoples of Europe and Asia. Through Ladoga were carried out around the world, the Eurasian scale trade, the city developed crafts, and the building of ships.

Today in Staraya Ladoga, there are about 160 monuments of history, archeology and architecture of VIII-XIX centuries the Excavations of the Institute RAS held here since 1973.