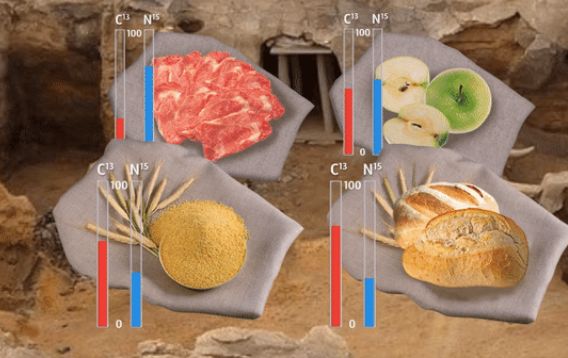 The scientists found that the first farmers of the Earth used fertilizers, irrigation systems and other methods of courtship for crops for growing peas and wheat, which refutes the idea of ​​the primitive nature of their agriculture, according to an article published in the journal Nature Plants.

“The emergence of the first cities is considered a turning point in the history of mankind, and almost all research in this area focuses on the political, social and economic changes associated with them.” Using the isotopes, we tried to find out how this agrarian economy worked and how it supported the growth of new Cities in Mesopotamia, “- write Amy Bogaard (Amy Bogaard) from Oxford University (UK) and her colleagues.

The first farmers and the beginnings of civilization, as anthropologists and archaeologists now believe, appeared about 11-10 thousand years ago on the territory of the so-called “fertile crescent” – a narrow strip of land in the Middle East, where the wild ancestors of modern cereals grew.

Traditionally it was believed that agriculture developed in a very progressive way – at first ancient people simply collected seeds of wild plants and did not grow them, and then cultivated in virtually wild form. Complex agricultural practices such as irrigation, the use of fertilizers and the rotation of fields, historians believed, appeared much later, in the time of Ancient Egypt, the powers of Mesopotamia and the Roman Empire.

On the other hand, recent genetic studies of ancient barley and other crops show that they acquired their current form for a long time, about 6-7 thousand years ago, which contradicts the theories about the slow development of agriculture. Bogaard and her colleagues opened another argument against this idea, finding an unusual way of “extracting” important information about how ancient people grew their food supplies.

As noted by scientists, the proportions of the two isotopes of the “elements of life” – carbon-13 and nitrogen-15 – will differ markedly in plants that grow on their own, and in crops that people are constantly caring for.

Differences in the concentration of the first isotope will be due to the fact that its share will be higher in the stems and seeds of those plants that are constantly watered and do not lack the moisture that prevents them from absorbing CO2, including molecules with “heavy” carbon atoms. Similarly, the proportion of nitrogen-15 in plant tissues will be unusually high if they are fertilized with manure, where heavy nitrogen is noticeably greater than in the soil.

Focusing on both these patterns, scientists analyzed the isotope composition of wheat grains, its stems and pea straw found in various sites of ancient people in northern Syria and southern Turkey, as well as in Israel, where people lived 8500-4000 thousand years ago.

To the great surprise of scientists, ancient farmers began using fertilizers and irrigation systems virtually immediately after the invention of agriculture, about 8-6,5 thousand years ago. Interestingly, the inhabitants of Mesopotamia seemed to understand well which cultures are more fond of water, and what less is needed, and planted wheat and peas on the wettest or most irrigated fields, and barley in the more arid areas of the soil.

In turn, the remains of the people who lived in these regions of Mesopotamia, say that agriculture played an important role in their lives after the transition to a settled life. The level of carbon-13 in their bones gradually grew, and the level of nitrogen-15 decreased, which indicates their gradual transition from meat to vegetable diet.

All this, according to researchers, suggests that agriculture began to develop very early, actually immediately after its inception, and that the ancient people used almost all of the same agricultural practices that farmers are using today. The transition to eco-intensive agriculture in later ages, as scientists believe, was associated with the emergence of property stratification and land ownership.

This casts doubt on the “demographic” theories of the development of civilization, which postulate that mankind began to use fertilizers and other innovations of agriculture only when high population growth required the invention of more effective farming practices, the authors conclude.