The Koyukon people of Alaska have an ancient legend in which Raven takes 2 animals each to protect them from a flood. These stories originated with these people before Christianity came to these places.

Below you can read this legend and we can say it not only mentions the Flood, but can also be an occasion for other no less interesting reflections on the events that took place in ancient times in pre-Flood times:

A long, long time ago, there were giant animals in the world, and there was no such thing as humanity. They were all big, able to talk to each other and use magic. There were even animals that no longer lived on earth. One day Dotson’ Sa, the Great Raven, said to Raven, “Make a big boat.”

And Raven made a big boat. It took a long time because it had to be very big. When Raven finished, Dotson Sa told him she wasn’t big enough.

“You have to build her bigger,” he said.

When it was finished, it began to rain. It rained a little at first, and Dotson Sa told Raven to gather all the animals in pairs. Raven gathered the animals and food for them. It was very difficult, but he made it anyway.

When the rain ended, Raven asked some seagulls to fly in all directions looking for land. They flew off and came back, telling us that there was no land in sight. There was only water!

After a while the flood was almost over. Raven told the muskrat to go down to the bottom of the ocean and make an island. The muskrat, who was actually very big, dived down and began to pick up dirt from the bottom. It continued to do this until land appeared.

Dotson’ Sa used his magic and created berries, trees, and plants to cover the land. When he did this, lakes and ponds were left where the lowlands were. Then the Great Raven created rivers. He made them so that they flowed both ways! On one side the river flowed down to the sea, and on the other side it flowed up to the mountains!

But later he decided it was too easy to travel that way, so he made the rivers flow only down to the sea.

Now that the flood was over and dry land appeared, Dotson’ Sa decided to create man. He created him out of stone, but since man was made of stone, he would never die, so the Great Raven decided to make him out of clay.

After he created man, he created a woman so that they could marry and have children. Raven wanted to have a wife, so he tried to marry one of the women, but the men took her away from him.

This made Crow angry, so he took some dried leaves and pounded them into a big bag. Taking the bag, he went to where the men lived and opened it. From there came out millions of mosquitoes, which still harass and bite mankind, because Crow was not allowed to marry a woman.

That’s how Raven created the whole world. That’s why he is never hunted, because he created everything. 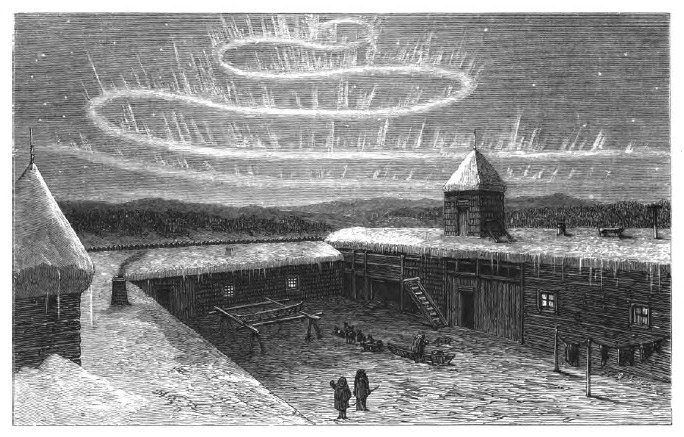 The Koyukon are an Athabaskan people living mainly between the Koyukuk and Yukon Rivers; one of 11 groups of Inland Alaskan Athabaskans. The first Europeans to enter Koyukon territory were the Russians who came to the Yukon River settlement of Nulato, led by centurion P. V. Malakhov, in 1838.

In the settlement they found iron pots, glass beads (glass cylinders of elongated shape with a longitudinal hole for the thread), clothing, fabrics, and tobacco, with which the coastal Eskimos had long traded with the Russians.

Smallpox epidemics that came with the Russians caused a high mortality rate in the settlement. In subsequent years infectious diseases drastically reduced the Koyukon, who had no immunity to these diseases.

The relative isolation of the people from the Europeans persisted until 1898, when, during the gold rush, Europeans arrived in search of gold.