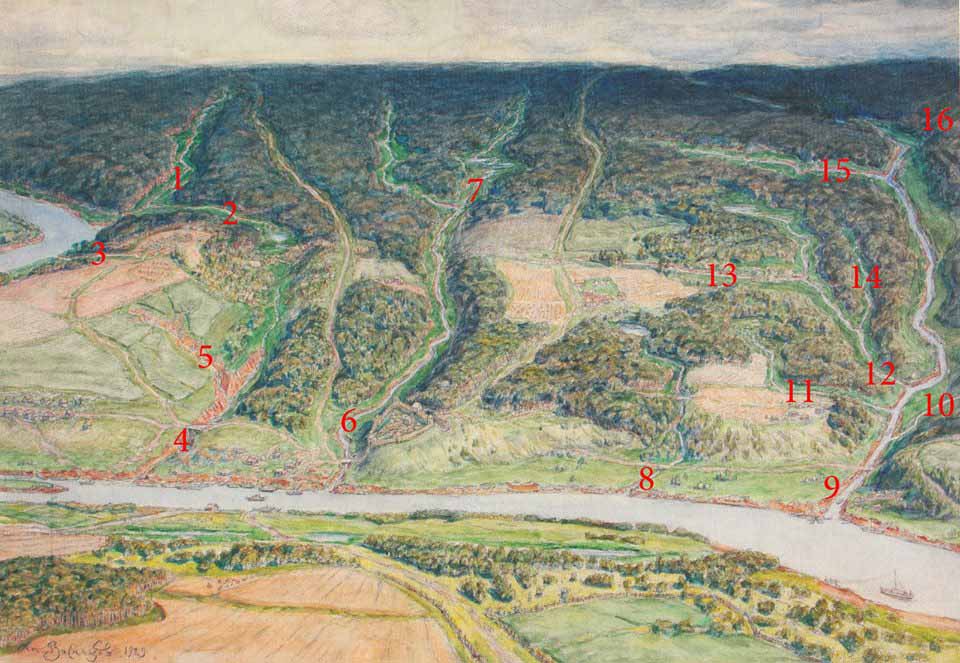 Digger Daniel Davydov, made a splendid overview of the picture of Apollinaria Vasnetsov for the presence in her of the original rivers of the capital, now enclosed in underground sewers.

For the convenience of the perception of the river in the picture, about which you will read, are marked with numbers.

“Who does not know the picture” Moscow – a town and a neighborhood in the 12th century “, authored by a wonderful artist, Apollinarius Vasnetsov?

From the point of view of the modern Muscovite, the picture rather resembles an epic illustration, a fantasy on the topic of how Moscow could have looked 870 years ago.

But Apollinarius Vasnetsov never allowed in his paintings artistic fiction.

Each of his work began with a meticulous study of chronicle and archaeological information, analyzing it, the artist received an accurate idea of ​​exactly how the relief, area, street, bridge or any other object depicted on the canvas looked.

By the way, Vasnetsov himself was a member of the Imperial Archaeological Society, under which he headed the commission “Old Moscow”.

In the painting “Moscow – town and surroundings” the center of the composition was the wooden Kremlin of Yury Dolgoruky – a small wooden fortification on the cape of Borovitsky Hill. And around, as far as the eye can see – forests, marshes and ribbons of rivers and streams.

Let’s try to figure out what the author meant for the rivers, drawing their steep banks and winding channels. For this I propose to make a trip down Moscow along the river, and then climb up the Yauza.

In the upper left corner of the picture is visible the bend of the Moscow River. There the river PRESNYA (1) flows into the main river in the capital, which gave the name to the eponymous district, this river did not disappear anywhere, it was simply removed to the underground collector at the beginning of the 20th century.

Slightly above its mouth is seen its left tributary – the river Kabanka (2), filling the modern pond in the Moscow zoo.
Immediately beyond Presnya is visible stream PROTOK (3), a small watercourse flowing now in the pipe right under the Protochny lane.

After returning to the space of the picture of the Moscow River, along the left bank, a deep ravine of the brook CHERTORYYA (4) is traced, taking on the right the stream Sivets.

In the place of Sivtse there is now a lane SIVTSEV VRAZHEK (5) – a ravine, on the bottom of which a muddy one ran, or, as they would say, a gray stream. He carried his water in the same muddy Chertory, whose deep channel is visible on the outside of Gogol Boulevard and at the very beginning of Prechistenka.

The next river on our route is the NEGLINKA (6).

It was thanks to her defense from the north-west that Prince Yury Vladimirovich chose Borovitsky Hill to lay a wooden fortress. Its high left bank in the Alexander Garden was preserved, perhaps, only under the Armory Tower, the other irregularities of the relief were almost completely leveled.

On the channel Neglinka today pass NONGLINN street, with the crossing Kuznetsky Bridge, above Trubnaya Square. Even today it is at the bottom of the ravine – this is the preserved valley of Neglinka, the name Trubnaya dates back to the 16th century, then a special pipe-tunnel was built beneath the fortress wall of the White City, for the flow of the river.

And even higher on the river is a fork. From the Regimental Street in the Marina Grove Neglinka runs, near the Durov Theater takes on the left the largest tributary – the river DIRECT (7).

The merger of Naprudnaya and Neglinka was preserved under the ground, right under the monument to the marshal of the Soviet Union, Fyodor Tolbukhin.

Returning to the river in Moscow, we still go down a little and see the mouth of the RUCK (8) from the Pure Pond. Once, Rachka was a tributary of the Moskva River, but then its canal was artificially changed and taken to Yauza, by the way, to us there!

Together with a small boat, portrayed by Vasnetsov, we enter the Yauza (9) and rise up against the current.

On the right hand remains KALITNIKOVSKY stream (10).
On the left – BLACKBERRY (11).

If we put a picture on the map of the modern capital, we would have reached Syromyatnichesky hydroelectric complex.
And they would see on the left hand the CHECHNYA water outlet (12) and the Olkhovtsa stream (13) and the Kukuya stream (14).

Now in the same collector is taken and the once independent Chernogryazka. Chechera had a source in the Red Pond, which was lost in the middle of the century before last, in connection with the construction of the St. Petersburg Railway Station. But Olkhovets can be reminded of Olkhovskaya Street, Olkhovsky Cul-de-sac and Elokhovskaya Square. Eloho used to be called alder.

Above the Yauza, you can see a fork in the river-it flows into the RYBINKA river (15). It seems incredible, but there are a lot of fish in Rybinka today, even though it is completely enclosed in an underground reservoir.

To our right was Electrozavodskaya metro station, and here is the electrical plant itself, with the collector Khapilovka coming out from under him (16). Khapilovka guessed at Vasnetsov in the forest, at the next after the confluence of the Rybinka bend. By the way Hapilovka is one of the few underground rivers in Moscow, on which even today you can swim on a rubber boat.

Apparently, Apollinar Mikhailovich did not invent anything and did not embellish in his work on the founding of the city. All the rivers that are visible in the relief are alive, although their existence is not so obvious to the Muscovites.

But in their underground channels, fish are still found, the otters live, and the meandering ravines are valleys, and now they still discern wrinkles in the face of the city. “