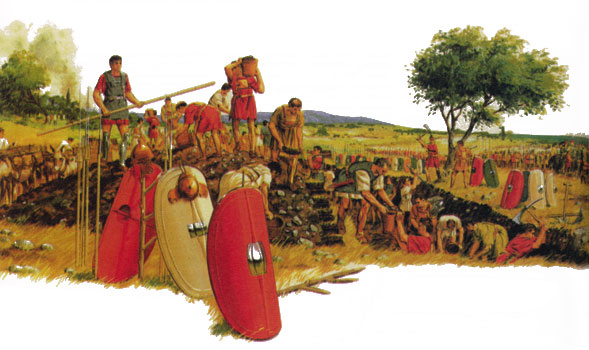 Spanish archaeologists have found in the territory of the region of Castilla y Leon three Roman camps of the I century BC.

According to El Pais, this was done thanks to the fact that several years ago the United States opened access to its military archives. They found thousands of pictures taken from reconnaissance aircraft over Spain. It took a lot of time to study them, but the result was worth it.

At an altitude of 1-1.5 thousand meters in the mountains of Bierzo, three still unknown camps of Roman legionnaires were discovered. In the smallest of them could be located 1.6 thousand soldiers, in large – 6 thousand people. They were built at the very end of the 1st century BC in the final period of the conquest of the Iberian Peninsula by Rome. However, what exactly the soldiers were doing in those places has not yet been established.

The US military saw these camps as early as the middle of the 20th century, but did not understand what they had discovered. In 1945-1946, the United States carried out a photographing of the entire territory of Spain – this was done in order to help advance the Allies at the end of World War II. In 1956-1957, the Americans repeated the operation, but already as part of the confrontation with the USSR. Then 60 thousand pictures were taken at a scale of 1: 33,000. For more than half a century, they have been in the archives until access was granted to them. When the photos were digitized, experts from several Spanish institutions were finally able to interpret the images.

Scientists note that in the area there were no good living conditions: there was little drinking water, low temperatures, and unfavorable weather. After the mission ended, the soldiers quickly left these camps, and soon they became covered with forests, which hid the buildings from human eyes.