Ancient tombs were even and telescopes 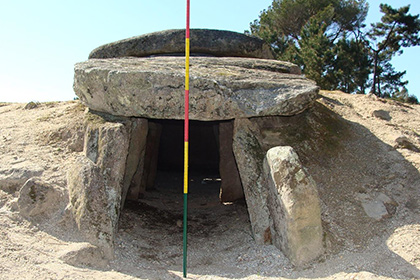 The entrances in the stone of the tomb was probably used by prehistoric people as astronomical instruments. This hypothesis scientists presented at the conference of the Royal astronomical society in Nottingham.

According to researchers, dark entrance to the tomb age of six thousand years, discovered in Portugal, was making the stars more bright to the observer. The entrances to the tombs were designed to Aldebaran, the scientists, since this star had a special meaning for ancient herdsmen, driving away the herds to summer pastures in the mountains. Apparently, the first appearance of Aldebaran in the sky before dawn (in late spring) gave the ranchers a clear calendar guide.

“A long passage that acts as a telescope without a lens,” said one of the study’s authors Fabio Silva (Fabio Silva). A narrow corridor pointing to the horizon, focusing the observer on the desired portion of the sky. The walls of the passage to block the rays of the dawn sun, increasing contrast. Finally, the eye of the observer, accustomed to the darkness inside the cave, it is better distinguish between the stars.

Inside the tomb could see a star first. According to the researchers, these observations were associated with ancient rituals: of the people were closed in the graves, alone with the remains of their ancestors.

In 2013, archaeologists found that the pits dug about ten thousand years ago in the North of Scotland, represent the oldest calendar in the world. Pits located so as to be able to count the months and the moon phases: they are oriented respectively to the point of sunrise at the winter solstice.