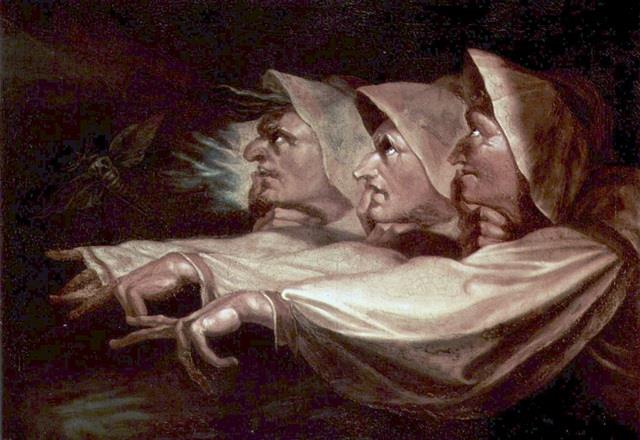 1461 year was for Europe a year of great changes and was associated with some interesting, perhaps random, but perhaps of importance, coincidences associated with the number 22. 22 Jun died the French king Charles VII, who ruled the country with 1422 (by the way, Charles VI died on October 21, so we must assume that Charles VII felt like a king 22 Oct). For 22 years the throne was occupied by Louis XI.

Nephew of Charles VII, the English king Henry VI, who ruled as his uncle, 1422, 1461, in the same year was deposed by his son Edward IV, who, like Louis XI, he remained on the throne for 22 years. Is it any wonder that the time was quite vague and in areas that separated France from Britain, was rather strange events?

The messages, first alarmed, then horrified the whole of France, came from a small town of Arras. In those days it belonged to the Duchy of Burgundy.

It all started with the fact that one after another began to appear women who, by their own admissions, participated in witches ‘ sabbaths, and was not ashamed to describe in detail what they did, how they moved through the air, changing their appearance, got into the house through the locked doors and Windows, what disgusting duty and what ingenious ways to spoil people and livestock.

Witches were listened to carefully and accurately record Wali terrible stories filled with details that were often new and unexpected, even for seasoned judges. The truth of witches was never in doubt. Their candor was stunning.

In a long trial no time left. Almost always the sentences were as obvious as the fault confessed. Criminals, who boasted of their daring antics, burned alive at the stake. Meanwhile, the inquisitors who were sent to Arras, quickly discovered that about her guilt openly, few, and black magic are doing here at every step.

Experienced professionals, who had begun the eradication of witchcraft, found a lot of work. They claimed that every third Christian in Arras was guilty of any heresy.

About Arras talked throughout France, Spain and Italy. Incredible stories about going there terrible crimes frightened and excited the population and could result in riots. Authorities did not want to tempt fate and let things drift. I had to explain all the simple people and to name the source of infection.

Soon found a suitable explanation for all the mysterious accidents in Arras. It was stated that the city has a sect of followers of Pierre Waldo (1140 — 1217), a merchant from Lyon, excommunicated from the Church in 1179.

The followers of Waldo, the Waldensians, who called themselves the “poor of Lyon”, called to give up luxury and excess property, to live austerely and to base their actions not on speeches flooded Europe prone to idle talk wandering preachers, but only in the text of the Holy Scriptures. It is unlikely that they were fond of witchcraft.

The Waldenses were actively spread their teachings throughout France. They reached the Netherlands and Switzerland, and when the Protestants joined them.

So, all of Europe knew anything to do with the people of Arras have not. Not worth it they have nothing better to buy and nothing to sell.

Arrastam it was difficult to get a loan. The city of craftsmen and merchants was in isolation and was doomed to extinction.

The Duke of Burgundy Philip the Good (1396 — 1467) every day reported new details about zlodejka of arrested. But he didn’t believe a single word, and was trying to scientists, the authorities and Church authorities have recognized that in most cases we are not talking about real witchcraft, but about the game of a sick imagination of senile old women.

Thanks to the persistence of the Duke of persecution of witches at Arras did not last long. They ended as suddenly as it began. When the arrests, interrogations, torture and executions stopped cheering townspeople, at one point forgetting about fear and tortured numerous innocent victims who took to the streets and staged a magnificent and fun festivities with singing, dancing and plentiful drinks.

People laughed at the ridiculous charges. In fact, it was hard to imagine anything more incongruous than the passion of kraszew ideas Waldensians. For anyone who has even a little information about the Arras, it is clear that its inhabitants could suffer for an addiction to witchcraft, but to pay for the hatred of luxury and a tendency to asceticism, they could not in any case.

Already in the IV century the city was famous for the wonderful carpets. The word arras (wall hanging, a curtain) entered the English language. ‘arazzo — wall luxury carpet for Italian. Wonderful silk and velvet products of the Arras masters. Arras passed from hand to hand. Belonged to either France or the Netherlands, Burgundy, whoever was driving his glory weavers has constantly increased.

Witch hunt in Arras entered the history of France under the name of “Vauderie d’arras” (the Arras Valdosta). Interestingly, V 22nd letter of the Latin alphabet. Many historians came to the conclusion that no Arras of Valdosta never existed. For exercises distributed by the “poor of Lyon” here would not find the soil.