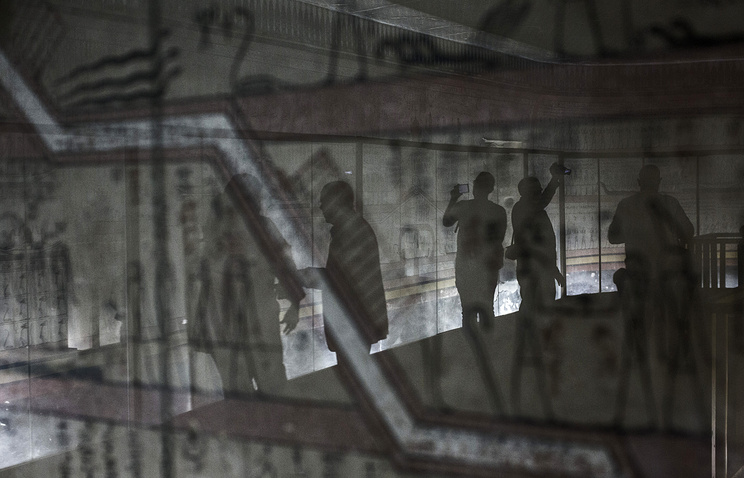 Egyptian archaeologists engaged in close study of the gold leaf found in one of the ancient Egyptian sarcophagus, hoping to establish the identity of the deceased is a Pharaoh.

American research center in Cairo is providing $28.5 thousand for financing of the project of the Ministry of Affairs of antiquities of Egypt for the study of 500 of the thinnest Golden plates, for many years stored in a wooden box in the vault of the Egyptian Museum.

According to the head of the Museum sector of the Ministry Ilham, Salah, Museum experts examined the leaves, which at one time was found at the site of the tomb KV55 in the valley of the kings in Luxor. Who was buried in the tomb still remains a mystery for many years, scientists have been unable to get to the truth. According to one version, the tomb belongs to Pharaoh Akhenaten (Amenhotep IV), king of XVIII dynasty (1375-1336 BC), the famous reformer during the reign of which there have been significant changes in the political and religious life of Egypt.

Richly decorated, including gold sarcophagus is exhibited in the Museum, but so far he remains unidentified. Last year, scientists have found a direct link between him and the gold plates. They hope that determining the age of these leaves and the deciphering of the inscriptions on the tomb will help them to set a time period of burial, and hence in the future, and to identify the person buried in it.

According to the coordinator of the project Islam Izzat, in addition to the 500 gold plates in a wooden box also kept in the tomb was found a small fragment of a human skull and a handwritten manuscript in French from the time of excavation. In it, in particular, specifies that the gold is directly related to the Royal burial, but there was nothing said about Pharaoh.

The reign of Akhenaten was a time of incredible religious reform, when it was introduced a monotheistic cult of a single sun God, Aten. All of the Central deity of the New Kingdom, Amon, Ptah, The Osiris, the Choir, Anubis was at the Pharaoh completely eliminated. Akhenaten founded a new capital, moving into the sixth year of the reign of Thebes to Akhet-Aten (now the town of tel El-Amarna). There was built the great Palace of the Pharaoh, which is considered the largest of all the civil buildings of antiquity.

The Palace walls were covered with scene and ornamental paintings, decorated with colored tiles; floors, ceilings, and stairs are colorfully painted; columns with elaborate capitals, painted and encrusted with coloured faience. At the entrance to the residence of Akhenaten were huge, gold-covered statue of the Pharaoh. Gold symbolized the sun, and therefore is widely used in decorating building and other objects under Pharaoh of the XVIII dynasty.