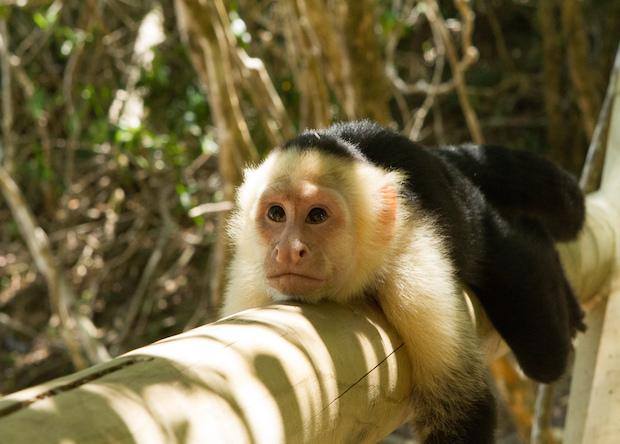 Scientists from Oxford University and the University of são Paulo in Brazil has shown that South American monkeys, Capuchins use stones to crack nuts has for at least 700 years. The article was published in the journal Current Biology, a short paraphrase is given on the website of the University of Oxford.

Observation of black-striped Capuchin (Sapajus libidinosus) in the national Park Serra da Capivara in Brazil showed that monkeys use stones as tools for cracking nuts, cashew nuts and various seeds. The Capuchins take not just the first stones, and then select the most suitable: heavy flat pieces of Sandstone they used as an anvil, and the smaller solid pieces of quartzite — like a hammer. Capuchins also create a special “space processing of nuts”, as he called them scientists, keeping the stones in groups in certain places — for example, under the walnut trees or on their branches. The ability to use tools passed down from generation to generation: young Capuchins learning to crack nuts, watching the older monkeys.

In addition to observations, the scientists also conducted archaeological excavations in the same national Park Serra da Capivara, digging near the cashew trees, next to which the Capuchins keep their guns. Scientists have found stone tools 69. Mass spectrometric analysis of the scrapings from these stones confirmed that they were used for cracking nuts cashews. A radiocarbon analysis showed that the age of the oldest of these instruments is at least 600-700 years — Capucine used the guns before the arrival of Europeans in South America.

According to estimates of researchers, the tradition of using stone tools exist in Capuchin has for 100 generations. The mass and material of the instruments remains unchanged, indicating that the conservatism of the Capuchins, who, unlike people living in the same region, I prefer not to make changes in its technology.

Described in the article finds represent the oldest known to date tools used by primates (other than humans) outside Africa. Until now, the only similar finding was made in côte d’ivoire, where they found guns age 4300-1300 years, which were used by chimpanzees. As said study leader Michael Haslam (Michael Haslam) from Oxford University, we can assume that tool use by Capuchins influenced the behavior of people: perhaps the first people who arrived in the area of modern Brazil, took over from the Capuchin ability to split and eat cashews.

The use of stone tools is considered the most important stage in human evolution. In addition to the human, stone tools used and some other primates. Thus, in chimpanzees there is a strong tradition of cracking nuts with stones (and the techniques differ in different communities), and macaque crabeater using rocks to crack clam shells and crab shells.