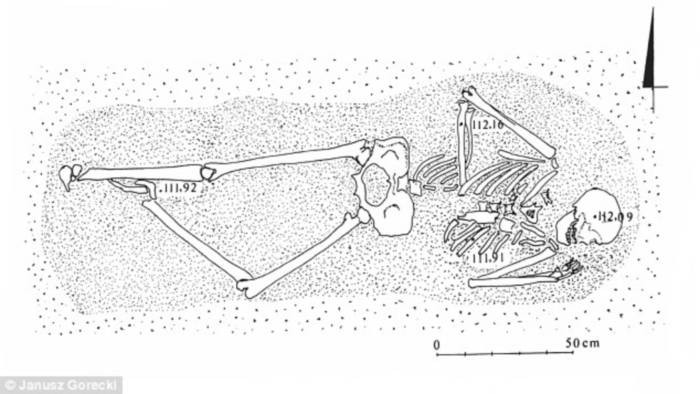 The Polish archeologists published a detailed report about a research of a skeleton mysterious a female giant, died in the 13th century. Remains of the woman whose body height made 2 meters 15 centimeters were found in Poland in 1977 at excavation at medieval church in the city of Ostruv-Lednitsky. Surprisingly, but only now scientists published results of a research of this skeleton. Scientists managed to establish the reason of her death.

Two meters 15 centimeters, even are very big body height presently, and then in the 13th century this woman was the real giant!

it is unclear why scientists needed 39 years on studying of a skeleton of this mysterious woman, but results of their researches published for the public are quite prime. According to the report, the woman died at early age and had giantism – pathological high-tallness, the bound to excessive production of hormone of body height.

At the woman revealed a rachiocampsis, defects of joints, traces of the hands and legs received during lifetime of changes are found. Experts explain it with a brittleness of her bones which broke under pressure big body weight. Numerous chronic diseases became a cause of death.

The skeleton of the woman of a giant was found at the cemetery of times of the king Boleslaus I Hrabry where in those old times buried representatives of the nobility. But did not find in a grave of the woman in general any objects and it means that it was from the lowest estate. Interestingly and the fact that the skeleton lay the head to the east, and hands and the woman’s legs at burial left bent, and in all other graves of that period at this cemetery, all skeletons lie the head to the west and with the extended extremities.