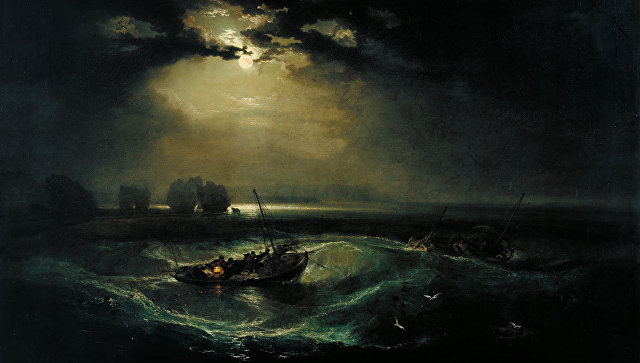 Nearly the best-known British artist William Turner and many other painters of the 19th century used unusual “nano” – a thickener for oil colors which secret of structure scientists could reveal only today, writes the Angewandte Chemie magazine.

“In two centuries before there were tools allowing to study chemical and physical properties of hybrid gels, artists already learned to prepare and use them, giving to the pictures a unique look. As well as in a case with secrets of blue paint of the Maya or the thinnest Chinese porcelain, the destiny of such opening depended only on abilities of artists” — Lorans de Laurence de Viguerie from Sorbonne (France) tells.

William Turner creating in the first half of the 19th century gained fame as the author of extraordinary bright and “air” landscapes which combined realism of Renaissance and rudiments of the impressionism which appeared is much later in France. For exclusively beautiful play of light and shadow in his pictures and good feeling of prospect contemporaries and art critics called and call him “the artist of light”.

New paints which basis Turner called “gumtiony” and “megilpy” were one of secrets of his creativity, and also painting of his pupils and followers. As de Vigueri tells, chemical composition of these paints, in general, was not a secret – they consisted of organic pitches, linseed oil, mastic and one unusual substance – compound of vinegar and lead. This substance was used in Ancient Rome as sweetener, and today it is applied only in chemistry as lead acetate is very toxic also its application in cosmetics and paint and varnish branch is forbidden.

Using a spectrometer, scientists analysed structure of pieces of “gumtion” and paint from Turner’s pictures. It turned out that addition of lead acetate in mix from pitches and linseed oil and disolution of all this in turpentine turned paint into substance, hi-tech to today’s measures, – so-called hybrid gel.

Hybrid gels represent the composite substances consisting of nanoparticles and molecules. The combination of organic and inorganic allows to create materials with extremely unusual properties, including with ultrahigh viscosity and durability.

Scientists learned to create such materials “consciously” rather recently, and today use them as a basis for fillings, and also an electronics engineering and other hi-tech devices. In a case with Turner’s paints jellifying substance as scientists consider, the lead forcing molecules of an acetic acid to unite in polymeric chains and to form gel material acted.

Creation of such gel without the modern scientific devices allowed Turner to paint pictures, figuratively speaking, layerwise, putting one paint coat over another and at the same time without mixing them among themselves. It as scientists consider, allowed it to achieve so clear and bright play of light and shadow at the late works, such as “A Christianity dawn” of 1841.