As the skeleton of Sauropods kept their multi-ton weight 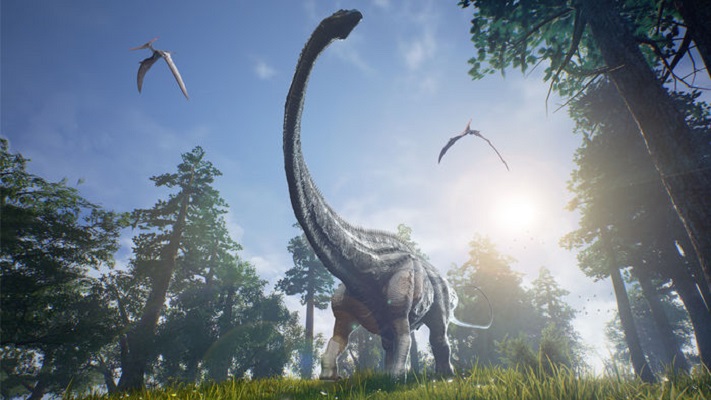 Colossi of the ancient world, the sauropods were the largest land dinosaurs of its time. Scientists are still arguing about how could a skeleton of these animals to withstand the weight of multi-ton body, and now, it seems the answer is finally found.

Sauropods were enormous creatures, reaching a length of up to 50 meters and weighing up to 77 tons, or 14 times the weight of the modern African elephants! Neck some of these dinosaurs were a great part of their length and reached 15 metres in animals called Supersupreme. Scientists have put forward a new hypothesis about why the dinosaurs could grow so massive: the special “jagged” bone in their backs which fit together so neatly, like parts of a puzzle. A new study helps scientists understand the growth characteristics of the ancient giants, showing how their skeletons could withstand the load from the monstrous weight of his own body, while maintaining structural integrity.

Scientists have long been wondering about how the sauropods managed to reach such sizes. The fact is that the larger the body, the harder it is to maintain, especially if most of all the time is in the air, that is experiencing an additional gravitational load. It is not only the strength of the skeleton: the longer the fabric, the harder the heart to drive blood through the vessels so that they would not have died from hunger and hypothermia. Over the years, scientists have been able to perform many of the characteristic features of the structure of sauropods, which have helped the animal not to injure their own bodies under the weight of the body: columnar legs, small head, bones with air “bags” and so on.

Paleontologist John Phronimos, who concurrently is also the doctor of philosophy, studied the fossil remains of Spinophorosaurus nigerensis, sauropods, in which the amount of individual vertebrae reaches half. When the scientist examined the massive fossils during a visit to a Museum in Spain, I stumbled across something unusual: deep, zigzag line in the vertebrae where the top half adjoined to the bottom at the complex and uneven path, as the teeth of the two gears.

In mammals and dinosaurs each vertebra consists of two bones, which slowly expanded over time: the cylindrical basis (actually of the vertebral body) and the arc on which are located the processes. These bones are wrapped around the spinal cord in the manner of a padlock and sooner or later harden. When exactly this will happen depends on growth factors and the stock of space that is allocated by nature: the human vertebrae harden in 6-7 years. But the huge sauropods of the fabric remained flexible even upon reaching 20 years of age, when they almost reached the limit of their growth.

As a result, says Phronimos, the vertebrae are constantly suffering from stress and where the bone is smooth, the dinosaurs visible uneven, corrugated surface, which, however, fit together almost perfectly. Scientists compare it with the transition from “bald” to proektirovaniem rubber tires. In addition to increasing the strength of adhesion of the two tissue mounds significantly increased the area of contact, which in result led to the fact that the load was distributed much more evenly, and the voltage in each point was much lower. It helped sauropod skeleton to withstand the Titanic weight of their owners. On his discovery the scientist says in an article published in the journal Ameghinian.

The next step, according to the scientist, will be the analysis of other skeletons to see if they have serrated fragments of the skeleton. The sauropods may have been the largest representatives of the dinosaurs, but other types differed impressive dimensions: tyrannosaurs, for example, weighed up to 9 tons, and was much more mobile.As the skeleton of Sauropods kept their multi-ton weight