Astronaut Buzz Aldrin confessed that he was not on the moon 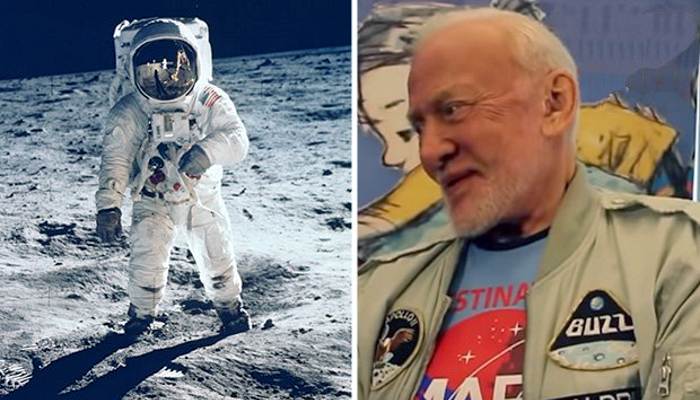 Buzz Aldrin said that he had never been to the moon, believe the proponents of the theory of the lunar conspiracy. The network is actively distributed video, which he admits in this in response to the question of an eight-year-old girl. The network became a viral video, in which former NASA astronaut Buzz Aldrin openly admits that he has never been to the moon, answering the question of a little girl. Supporters of the theory of the lunar conspiracy are convinced – Aldrin finally told the truth. For a day, almost 300 thousand users watched the video.

“Aldrin’s comment is a direct proof that NASA has never been to the Moon,” says ufologist Tyler Glockner. Commentators who share Glockner’s views have distinguished themselves by a rich imagination. Some of them agree with him not completely: they are sure that Neil Armstrong on the Moon found a secret base of aliens who made it clear – guests from the Earth are not welcome here. In fact, of course, the conspirators went their own way and just pulled the words out of context. In 2015, Aldrin visited the National Book Conference in Washington, where a small visitor asked him why no one had been on the Moon for such a long time.

“It’s not a question of an eight-year-old girl,” Aldrin replied. – This is more of my question. I also want to know this. I have not been, that’s all. It happens. And, since this does not happen anymore, it’s good to know why it goes that way. In the future, if we want to continue to do something, we need to know why we stopped doing it in the past. ” Aldrin did not say a word about the fact that nobody was on the moon. It was about the end of the lunar program and the absence of missions after 1972.

The video of the conspirators did not get the further part of the interview, where Aldrin reveals a completely prosaic reason why people never set foot on the moon for the second time – a lack of funding. In the full interview, Aldrin mentions twice that he visited the moon, says that he and Armstrong have achieved what the president wanted and that the world is proud of what he did.

“Money. It’s a great thing. If you want to buy new things, new missiles, and not continue to do the same thing over and over again, it will cost more money. And the rest also needs money. So, we achieved what the president wanted from us … And then thousands, millions of people in the US and around the world …

You know, when we returned, we went around the world and it was exciting to understand – we did it. Not only me and Armstrong, but the whole world. They felt honored by what we could do. And from this we felt great, “said Aldrin. In addition, after Aldrin and Armstrong on the moon visited 10 more astronauts.

Last time, misadventures are piling on Aldrin’s head. In the spring of 2018, the media attributed to him the words about the meeting with the aliens. The British tabloid The Daily Star dumbfounded the world with its “exclusive” message that four astronauts, including Buzz Aldrin, were tested on a lie detector, telling about their experience with UFO sightings during space flights.

In their note, the writers of the throwing referred to a certain Institute of bioacoustics in the city of Albany, Ohio, the USA, whose researchers allegedly carried out a “complex computer analysis” of astronaut voices as a result of the experiments, and came to the conclusion that they are completely confident of their meeting with UFOs.

At the same time, the “researchers” did not embarrass that at the time of the test, two of the astronauts had already died. The fact that their technology allows you to communicate with the inhabitants of the underworld, in any case, they did not mention. Aldrin himself repeatedly refuted rumors that he had seen a UFO. During the mission of “Apollo 11” he saw an unusual glow, but later it turned out that it was sunlight reflected from the caps of the landing gear.

“Which one? I do not know. So formally it was an unidentified object, “Aldrin joked. And in June he had to sue his own children. In a lawsuit filed June 7 in the courts of the County of Brevard, Florida, it is claimed that his son Andrew Aldrin improperly transferred $ 475,000 from his father’s account with Morgan Stanley to his bank account in 2017 and 2018.

It is also reported that Andrew Aldrin and Christine Corp., Secretary of the Cosmic Fund Buzz Aldrin, spent monthly for personal purposes up to $ 60 thousand on false powers of attorney without consent and informing Buzz, having placed his guardianship over him for no reason. Having become trustees, they got access to his credit cards, bank accounts, accounts in social networks, money he received for trust management, and other property – commemorative things from space worth millions of dollars and “all elements of the Buzz Aldrin brand.”

In addition, the lawsuit notes that Andrew Aldrin and Cristina Corp over the past few years have spread rumors that the 88-year-old astronaut suffers from dementia, senile dementia and Alzheimer’s disease.

This tactics the defendants used to gain additional control over business contacts and assets of Buzz. In addition, Andrew Aldrin, Christine Corp and the daughter of Buzz-Janice – supposedly forbade the astronaut, who was married three times, to marry for the fourth time, intimidating, manipulating him and “interfering in his cordial affairs.” A representative of the Aldrin family refused official comments.