At the plate Maya the encrypted message to the aliens 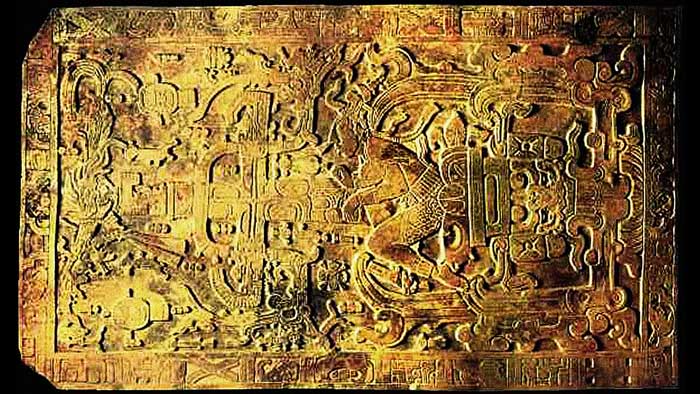 Aliskhan the Houten, metrolog for education, has long been interested in measuring everything. And believes that through the universal to the Universe of the language of proportion based on the number “PI” – the “Golden ratio”, also known as Leonardo da Vinci, you can “read” any archaeological monument on Earth. He read the famous Mayan plate “with a picture of an astronaut in the temple of the inscriptions in Palenque and Stonehenge in England.

Plate, which says Aliskhan the Houten – the object is really unusual. It covers the sarcophagus of a great Maya ruler’s tomb which was found in 50?ies of the last century in the temple of the inscriptions at Palenque. Near carefully hidden under the hollow of the temple tomb, the archaeologist from Mexico Alberta Rus Luilu found the remains of sacrificed five boys and one girl from aristocratic families.

That is not simple slaves, saying inlaid with pyrite and jade them in the teeth: a luxury available only to the rich and noble. Such sacrifices could be brought only in case of death of an extraordinary leader who left an appreciable trace in history.

This, incidentally, gave rise to some journalists quickly dubbed the Royal sarcophagus of the tomb of Pacal the Great – the founder of the Mayan Empire. However, the myth is quickly dispelled – Dating of well preserved remains of very tall Mayan 40?year old man in the sarcophagus does not coincide with the lifetime of Pacal.

Radiocarbon analysis revealed that this great leader lived relatively recently – in the VII century of our era. The attention of researchers was attracted by an amazing coincidence in the funeral rites of the ancient Egyptians and Maya – the sarcophagus of the ruler under the floor in the pyramid and the burial chamber is decorated with rich paintings, reliefs, carvings, and… characters. And the mummified body of the king at the technology that was used to preserve the body shell of the ancient Egyptian pharaohs.

The ancient leader in the aircraft

However, of particular interest was the cover of the sarcophagus is a solid plate with a mass of 20 tons. A study of this plate were engaged not only historians and archaeologists but also specialists in UFOlogy, as well as experts in the field of construction of aircraft and Astronautics. Such a stir in the scientific world called the pattern printed on the surface of the plate. It depicts a man sitting in the chair… of the aircraft. His head is protected by a transparent helmet, and the hands are on the control panel. With one hand he squeezes the handle lever, and the second presses the key or switch. 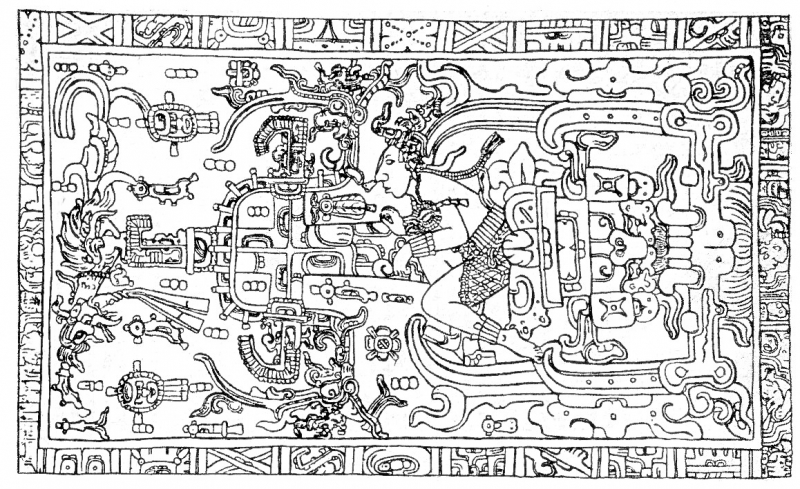 His left leg is positioned like the person presses on the pedal. Costume reminiscent of the uniform of modern astronauts before they put on a suit. In addition to the man himself, on the plate depicts a mysterious instrument, which may be the instrument control panel of vehicle sensors and external control.

In the bow, as suggested by scientists, are two powerful electromagnet, which probably create a magnetic field in the space in front of the vehicle to prevent collisions with small meteorites and space debris.

And in the rear are located the instrument, which may be a nuclear reactor, and from the stern of the device breaks the flow of the flame.

And if this plate covers the sarcophagus with the body of the leader, then at the plate – his lifetime image. Here symbols are carved the story of the death of the deified Supreme ruler and his rebirth in heaven. But is the sky unknown to the great leader went on a space ship?

However, the version of the astronaut could not stand criticism, and the conclusion reached by scientists is amazing.

The ancient leader was not an astronaut, and a tractor, says Aliskhan the Houten. – It was not my idea, it is the opinion of scientists from St. Petersburg Academy of Sciences Pushkin!

A group of researchers voiced a hypothesis: the breeding of maize in Palenque was made on alien technology, but with the employment of Indians trained! And it is true: the profile of the “spaceman” recalls Maya, and before the so-called rocket… depicted an ear of corn.

Therefore, that’s it?still, the harvester of culture, which the Indians called maize and is still considered sacred. Noteworthy seat “combiner” is just a metal mesh around the contours of the body.

Very ergonomic, takes up little space. Corrugated hoses, which at that time could not be invented, say clearly: displayed machinery of extraterrestrial origin.

By the way, the selection of corn were in South America as early as 7800 BC, and it is a strange plant – reproduce independently not can. If the cob falls to the ground, it just rots – need help man. According to the myths of the Aztecs and the Maya maize gave people the main God Quetzalcoatl!

They wanted to tell us?

Amaze and mathematical coincidences. Length the most famous of the plate – 380 cm Width – 220 cm Aliskhan the Houten, using their “language of proportions,” made the following conclusions:

– If the length divided by the width, get value, close to the logarithm. If you square it, you get the speed of the Earth around the Sun, and very accurate.

But how could the ancient Mayans know these things? In the slab of Palenque still encrypted number three: the third planet, three dimensions!

– I think aliens visited in ancient times the Land and knowing the dynamics of the development of human civilization, everywhere on the planet left encrypted messages to read and evaluate which we only have today, – says the scientist.

The temple of the Inscriptions — what’s inside?

It devotionalia pyramid height of 24 meters. Stairs of the pyramid is divided into four platforms, which are five sections of steps. The total number of steps is equal to 69. On the surface, the eighth step of the pyramid located building with five entrances and three rooms, one of which was discovered hidden under a stone slab tunnel leading to the tomb.

One of these is visible even from space letters Houten believes and the famous Stonehenge in England.

– Stonehenge – this Observatory, and a visual aid for astronomy, believes metrologist and researcher of anomalous phenomena from Volgograd. – The fact that Stonehenge is a Solar system view from above. If “count” Stonehenge using the language of proportions, it appears that it is encoded very accurate dimensions of the orbits of the planets of the Solar system. Including orbit already non-existent fifth planet of the planet Phaeton, on the spot where now is the asteroid belt.

You ask, what about the recently discovered English by the archaeologists right in the centre of Stonehenge cemetery Celtic chiefs? And the theory that Stonehenge is not an Observatory, a burial place of the nobility?

– Answer – to bury the leaders there started late. This is an example of how people adapt ancient monuments to suit your current needs. The original function of Stonehenge, I’m sure, educational. The aliens tried to give earthlings their knowledge about the Universe…