Atakamsky humanoid turned out to be a girl with unknown mutations 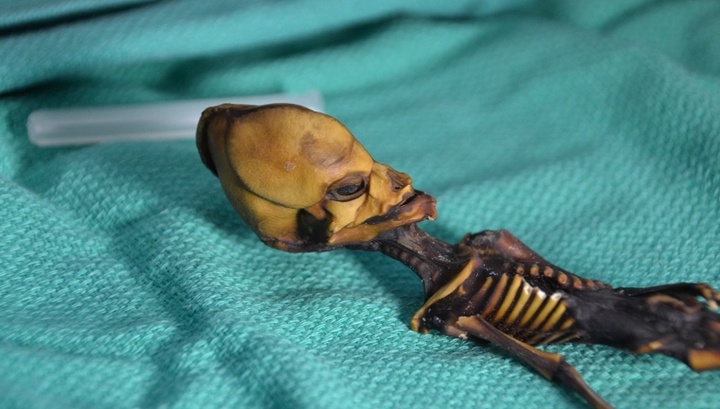 In 2003, in the abandoned village of La Noria in the Chilean Atacama desert, the collector of artifacts of Indian history Oscar Muñoz found a strange mummified skeleton, nicknamed the Atakam humanoid. Remains of the humanoid creature, stored in a leather fold, are well preserved (there were even hard teeth).

But another thing was curious: first, the skeleton barely reached a length of 15 centimeters, and besides it had 10 pairs of ribs, and not 12 as people should. Secondly, he had a greatly elongated skull and deep sockets of the eye sockets, which gave similarity to classical aliens from science fiction films. That is why the mummy was nicknamed the Atakam humanoid.

Mysterious remains traveled for a long time to the archeological black market, until they got into the private collection of one Spanish businessman. He believed that in fact he possesses the skeleton of an extraterrestrial being, until the scientists were interested in this story.

A team from Stanford University (USA) conducted sequencing of the genome of the Atakam humanoid and proved that in fact it was quite an earthly person, namely a little girl. True, with unusual developmental disorders.

According to researchers, in the Ata genome (as it is lovingly called specialists) there is a DNA of modern people in combination with the DNA of Native American peoples, as well as ancient Europeans. Which is predictable in principle if the girl was born in Chile, where the Indians and the colonialists lived at the time.

But skeletal anomalies scientists associate with a set of rare genetic mutations – both long-known and recently discovered. In particular, we are talking about dwarfism and other growth disorders, as well as the development of bones (it is specified that DNA was extracted from bone marrow tissues).

By the way, the leading author of the study, Professor of Microbiology and Immunology, Garry Nolan, stated in 2013 that the whole thing is in dwarfism, but then he did not have enough evidence, and other scientists challenged this version, believing that before them and at all not having had time to be born a child – a miscarriage or discarded after the termination of pregnancy.

Only five years later, Nolan’s team, thanks to modern methods, managed to explain the phenomenon of Atakam humanoid.

Analyzes showed that the remains are not as ancient as archaeologists had originally thought: they are about 40 years old. To begin with, the genetic data of the girl compared with the genomes of primates, to dispel all doubts about its origin. Then followed comparative analyzes with the data of other people – so the scientists specified the related ties of Ata.

But the most surprising thing was this. The condition of the bones indicated that the child at the time of death should have been 6-8 years old. 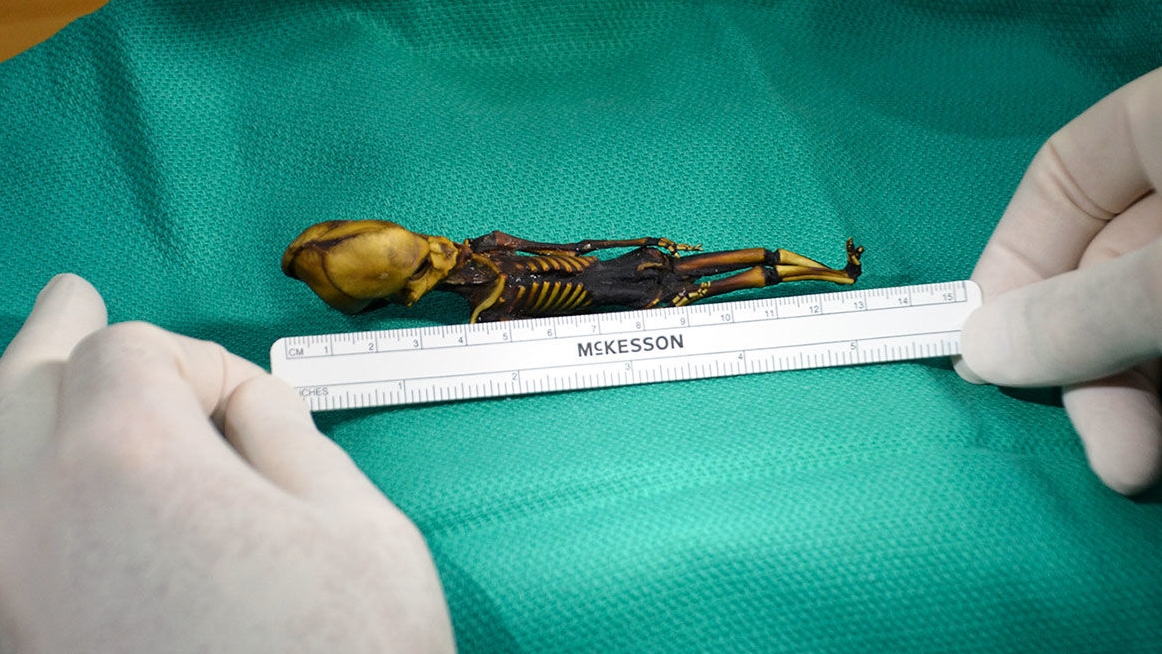 Genetics, who were engaged in the search for mutations in the genes responsible for the growth of bones, admit that they were simply stunned by the result. They identified 64 mutations of not one, but several genes at once, and some of these disorders had not previously been described.

Since there was nothing known about any relatives of Ata, the specialists searched for coincidences in the database called “Human Phenotype Ontology”, which stores information about the phenotypes of people with various anomalies.

Comparisons with data from this database confirmed that Ata had mutations responsible for abnormally slow growth and development of skeletal bones, as well as the absence of several ribs.

In addition, four previously unknown mutations in genes associated with bone diseases (for example, scoliosis) were found, and two mutations in the genes responsible for the production of collagen, the protein that forms the basis of the connective tissue of the body (tendon, bone, cartilage, dermis and so on).

Nolan concludes: Still, it is most likely that Ata was born as a result of miscarriage or premature birth, and the bones during the fetal development period had aged for several years due to the huge number of mutations.

The team notes that this kind of work will serve as a good example for future studies when it is necessary to apply the “reverse approach” to the diagnosis – instead of starting with a description of the disease and looking for a mutated gene, first weed out all variants and understand which mutation is present in the genes and how many of them in general, and then talk about the diseases caused by the changes.

Of course, in the case of Ata, it will take a lot of work to establish all the diseases caused by the huge number of genetic damages. In addition, unexplored mutations will require a separate study and description. It is possible that this information was not enough for specialists to create new methods for treating bone diseases and growth delays.

As for Ata, her remains were offered to be returned to her homeland and buried in accordance with local customs.