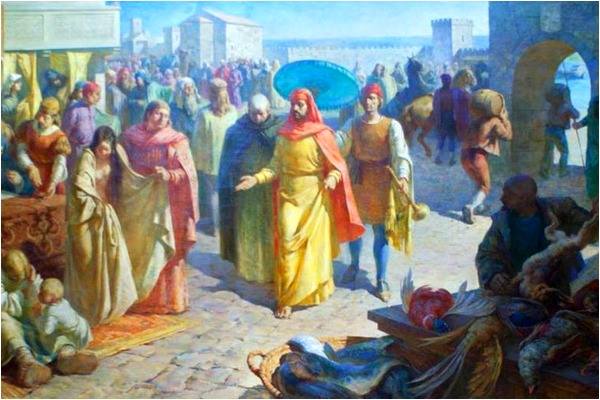 During excavations on the street of Yaroslavl archeologists of the Azov Museum–reserve found the observation tower, 14th century Venetian castle. Where 700 years ago the castle located area of 200 by 200 steps, two narrow streets: Yaroslavl and the Genoese, in honor of the Genoa, which competed with Venice and the Azov sea port. By the way, in Venice on Tanya forgot: there is street Tana bridge, named, channel, embankment and even a restaurant.

In Azov the memory of Venice is not marked, there are small streets of Genoa and part of the wall.

The composition of the urban population of the Italian Tan, which actually is the beginning of a life settlement as a city was extremely diverse: Greeks, Armenians, Russians, Jews, Tatars… Genoese and Venetian colonies and their metropolis, is constantly at odds with each other, although in the same colony, as, for example, Tanya could be a factory, two trade republics. According to the scientist Andrei Maslovsky, the Venetians and the Genoese competed:

— Discovered the observation tower was not even watching the nomads from the steppe, and to control the neighboring Genoese, since they lived together like cat and dog, ” he said.

From Tana to Italy exported wheat, fish and eggs, furs, wax, spices, sandalwood, leather, med. Imported tan cloth, copper and tin. One of the main sources of income was the slave trade. Representing a continuation of Azak, Tana was also stone-walled and turned into a fortress.

Research on the territory of the Italian factories is difficult because it is situated in an area of intense urban development. But historians know a lot about Tanya in the surviving documents. Was here and the Church of St. Mark, and the Genoese stronghold, and slave market. But in the coming years and perhaps decades Venetian castle and its mysteries will remain under the ground — as long as you don’t begin active construction, and hence the excavations.