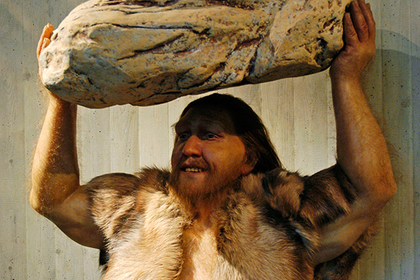 German, Estonian, British and American scientists named the terms of crossing the representatives of a reasonable person and Neanderthals. The corresponding study was published in the journal Nature Communications, briefly reported by Science News.

Experts believe that two kinds of people began to cross from 220 to 470 thousand years ago. The scientists came to this conclusion by analyzing the residues of mitochondrial DNA (mtDNA) from the Neanderthal man, who lived about 124,000 years ago near the Holenstein-Stadel cave near the city of Ulm, Germany.

In the United States, they answered the main question of evolution, proving the natural selection of a person
The remains of the Neanderthal man were discovered as early as 1937, but only by now has it been possible to decipher the mtDNA contained in them. It turned out that it is similar to that of humans, whereas in older Neanderthals the DNA found in the mitochondria is similar to the mtDNA of the Denisov man.

The latter is transmitted only on the maternal line. At present, about three percent of the DNA of the modern representatives of a reasonable person, with the exception of the indigenous inhabitants of Africa, comes from the Neanderthals. Neanderthals and Denisovsky are extinct species (or subspecies) of people.