Business on the bones of mammoths

About 10 thousand years ago, Northern Siberia was inhabited by shaggy giants, called mammoths. Now extinct genus of mammals affected due to the temperature increase at the end of the last ice age, which resulted in their habitat was flooded and reduced.

Animals are trapped in a prison on an isolated island, where there was the slightest chance of returning to the mainland. Some populations, sharpened on these land areas to the East and North of Siberia, was delayed and became extinct around 3700 years ago.

The remains of mammoths, in particular their tusks today are the status of the most common fossil finds in the Siberian regions. Scientists estimate that the reserves of this ancient material in Russia reach hundreds of thousands of tons, and the annual production is a few tens (20 to 60) tons. Given the volume of mined relics, one can only imagine what a great number of mammoths lived on these lands in those days. A well-known tusks-Champions Curling up in a spiral of 4-4,5 meters, their weight was equal to 100-110 kg and a diameter of 18-19 see

Indigenous peoples of the Northern regions, formerly often met washed in spring waters of the tusks, believed that the giant animals move under the ground, putting over its surface but their huge fangs. They called their Eggor, i.e. earthen deer. According to another tradition, the mammoths lived in the early times of creation. Because of their enormous weight they are constantly sinking to his chest in the ground. In the created mammoths paths formed rivers and streams, which ultimately led to the complete flooding (there is a legend that during the biblical flood, the animals wanted to be saved on Noah’s ark, but I couldn’t fit in there). For some time the animals floated over the vast waters, but having taken on the tusks of birds condemned them to death.

Throughout the European part of Russia and Siberia and up to the mid XX century, actively flourished folk art of bone carving. Local carvers produced combs, boxes, small sculptures and podcasti exclusively from the tusks of mammoths. This material is very beautiful, elastic and durable, though has some difficulty in processing. Its hardness is equivalent to such materials as pearl, amber and coral. Mammoth bones are easily handled cutter, acquiring a gorgeous mesh pattern and large size of them can perform almost any sculptural form.

Return the tusks of mammoths from the permafrost through the hard work of the explorers. Their production is quite complex, as is often ancient material is covered in swampy areas and rivers in the tundra. Frequently find the tusks along the banks of streams, lakes and ravines. To retrieve one artifact earner is required from several hours to several days of continuous excavation. Before you pick up the material, hunters tusks thrown into the excavated hole silver ornaments or colored balls, as an offering to local spirits.

Today, virtually all extraction of mammoth tusks in the vastness of Siberia is of illegal nature, and about 90% of the jewelry eventually ends up in China, where it is venerated by the ancient tradition of ivory carving. The rapid growth of demand is causing some concern to researchers, as it leads to loss of valuable data about who lived on this earth animals, tusks which contain information about the climate, feed and environment. Perhaps in the permafrost of Siberia is still locked millions, or more mammoth tusks, but finding them every year becoming more difficult. Currently, the cost of a kilogram of high-quality mammoth bones on the black market is about 25 thousand rubles, and in antique stores in China, the price of one adorned with elaborately carved tusks can reach a million dollars. 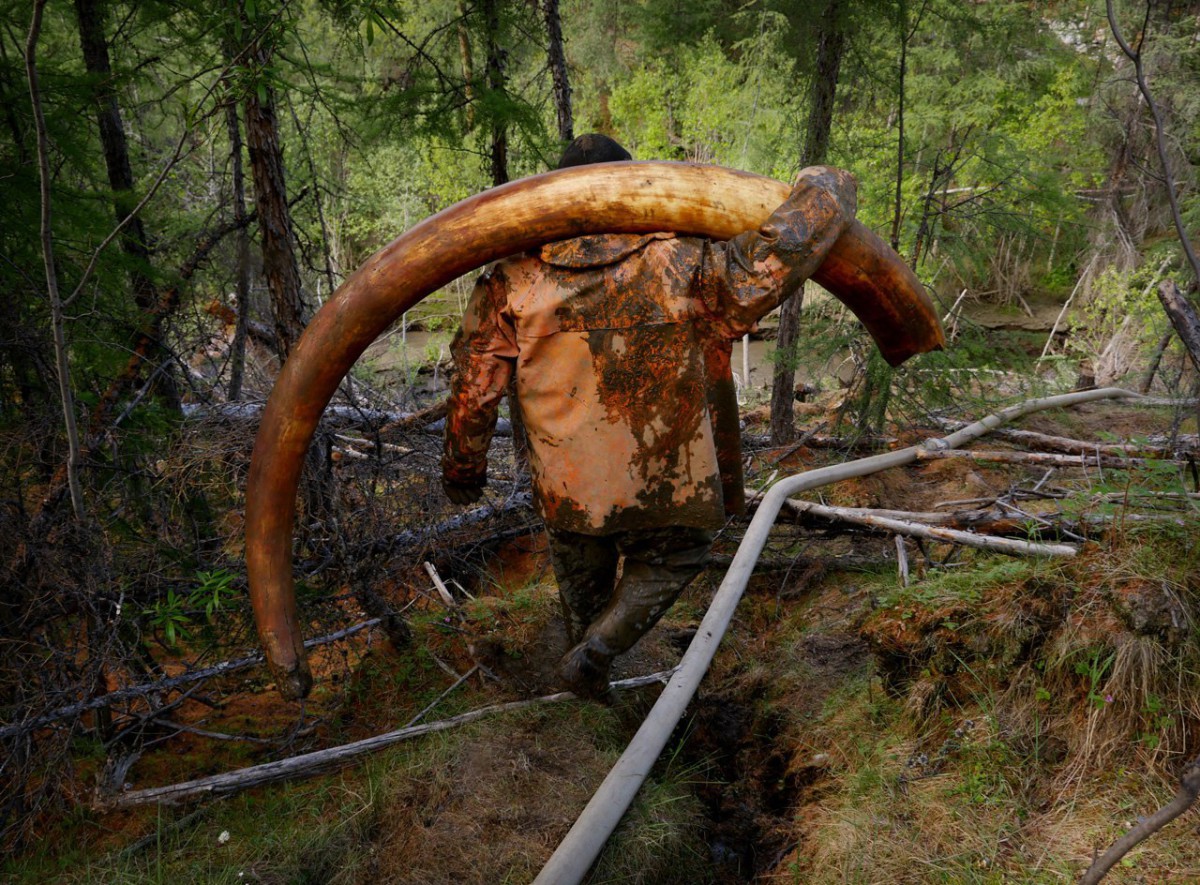 In Yakutia there is a new kind of “gold rush”. Only the miners at the local “mine” wash not gold, and tusks of mammoths. It turns out that the ancient bones of huge demand in many countries of the world, and potential buyers are willing to pay tens of thousands of dollars for these resources. How does the extraction of tusks and is it legal?

Camp somewhere far away in the tundra, fire, tent, and excavated earth − that’s the harsh Yakut miners. Today, the production of mammoth bones in the Sakha Republic – a very profitable business. For example, the weight of the horns of woolly rhinoceros comes to 5 kg, and 1 kg costs at least 450 thousand rubles (the price of the dealers). The demand for such resources is great. The bones of the Siberian mammoth is taken in USA, Germany, South Korea, Vietnam. But the biggest flow goes to China. Directly in the villages, the Chinese are buying the tusks. So in the distant Yakut villages there were millionaires, and even a dollar. Prospectors claim to be working under license. It really is possible to obtain from local authorities. In fact, this is the license for subsoil use. The problem is that at the Federal level, this area is generally not regulated.

Boris Kokotov, member of the Expert Council of the state Duma Committee on natural resources and environmental management says that the problem lies in the fact that the list of minerals mammoth tusks are not included. Therefore, the question of mammoth tusks as to minerals and the consequences of this attitude on those who illegally mined fully, to feel I can’t. Another question is how this mining will affect the ecosystem. Miners use powerful hydrants and erode a large amount of permafrost. Often, these remains are on the banks of ponds. Naturally, this erosion lead to collapsing banks of reservoirs, of course, changing the hydrology of the reservoir.

It is estimated that only within the land part Severobaykalsky bone-bearing province is concentrated from 140 to 185 thousand tons of mammoth bones. But only in Yakutia accounts for up to 70% of its world reserves. Practically inexhaustible “gold mine” for hunters tusks..