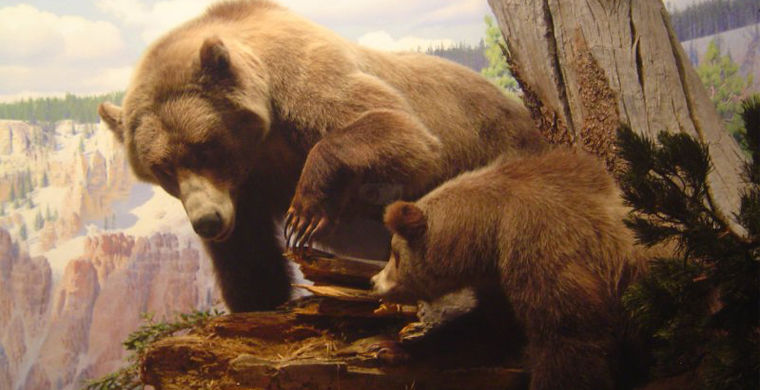 Cave bears (Ursus spelaeus) is one of the icons of the ice age and was thought until recently, one of the main “enemies” of the ancestors of Neanderthals and modern humans penetrated into his “fiefdom”, the mountains and the glaciers of Europe, in the late Pleistocene.

It is believed that these cave dwellers went extinct about 24,000 years ago, at the time of the onset of the last interglacial period, as did the scientists, because competition for prey and shelter to people.

These bears were much larger than modern brown bears, reaching a mass of 500 kg, but they are inferior to their American “cousins”, short faced bears (Arctodus simus) whose mass average reached 600 kg, while height is 2-3 m. the Analysis of the pattern of cracks in the enamel of their teeth, conducted decades ago, showed that they ate mostly vegetation and soft food.

Jacqueline Moustakas from the University of Helsinki (Finland) believes that diet, not competition with people, cave lions and other predators of the Pleistocene caused the extinction of these bears. She came to this conclusion after analyzing and comparing the device of the teeth and of the jaw apparatus of these bears how to construct the teeth of their modern brown, white and black relatives.

In the last decade, paleontologists have drawn attention to the fact that the fossilized teeth of mammals carry the traces of their diet. For example, vegetable or meat diet of animals can indicate the isotopic composition of their enamel, the teeth shape and pattern of scratches on their surface, differing for solid and soft food, as well as the complexity of device teeth.

According to Moustakas, content and form of the teeth of Ursus spelaeus have shown that these bears were 100% vegan and not omnivorous creatures with vegetarian tendencies, as scientists previously believed.

This is supported by the fact that the molars of cave bears was the most difficult from the point of view of their structure. The high complexity of the structure of the teeth is characteristic of herbivorous animals, while the teeth of carnivores are usually arranged simply as they do not have to chew solid foods in large quantities. Other teeth of Ursus spelaeus were signs that they were under constant load.

Such a diet and the lack of universality could be, as scientists believe, the reason why these “predators” disappeared at the onset of interglacial — usual plant food disappeared, retreating to the North with the glaciers, and cave bears did not manage to adapt to climate change. This is likely caused their extinction, not competition with humans or other predators of the Pleistocene.