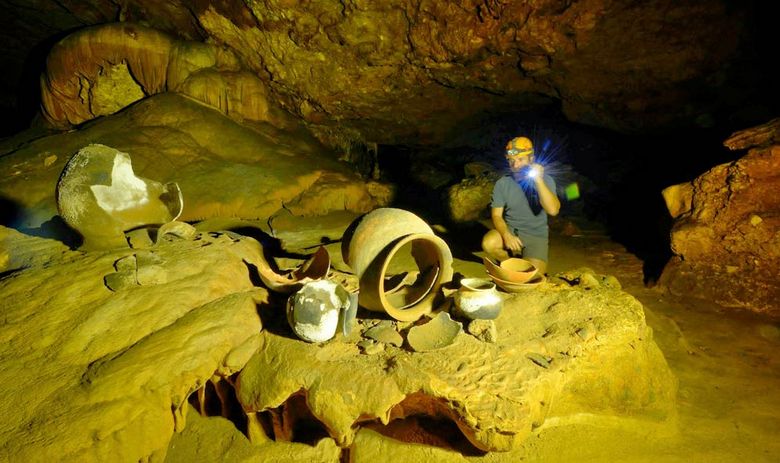 This cave with such a hard-to-pronounce name is in the state of Central America Belize, near the small town of San Ignacio, more like a tourist village.

One of the most interesting sights of this region is the unique cave Aktun-Tunichil-Muknal (“Cave of the Crystal Tomb”).

It was discovered among the impenetrable jungles according to the concepts of archaeologists most recently – in 1989, but since then the flow of tourists has not stopped here. The fact is that this cave was at one time a ritual place for the Maya tribe, and they used it for the last time about fifteen centuries ago. Since the ritual ceremonies of Maya performed sacrifices, the cave rests about fourteen skeletons. And, as the researchers found out, the ancient aborigines were not particularly picky about what people should be sacrificed to their cruel gods, for this reason half the skeletons are children under 6 years old, the remaining half are adults from 20 to 50 years old.

The uniqueness of this cave lies in the fact that the authorities of Belize forbade to export to research, restoration and to museums everything that was found here. Moreover, even excursions to Aktun-Tunichil-Muknal are strictly regulated, they can be carried out only by certain guides who have received special certificates for this.

Journey to the Cave of the Crystal Tomb

Such an excursion for visitors is a real trip with a length of 6-7 hours. First tourists climb the mountain road through the real jungle, crossing several rivers ford. Then also, only through the stream of water, which resembles the main arch of the cave, you can get directly to Aktun-Tunichil-Muknal, which is almost five kilometers long, and its last and most interesting hall “Cathedral” is at the very end. Therefore, everything goes on about all at least two hours of excursion under the arches of a unique grotto.

It was in the “Cathedral” that the Maya sacrifices took place, and here you can see the most amazing exhibit of this “museum in the cave” – ​​the “crystal girl”. It is called so far not by chance, for that was the age-old deposits on her body that reflect light, which gives the impression of her “crystal”. The artifact glows, visitors of the cave say, as if it were made of unique rock crystal. So behind this exhibit, and so entrenched such an amazing name – a crystal girl, and the cave of sacrifice itself was called a crystal tomb.

I would like to say a few words about some incidents that occurred here. In 2012, one tourist managed to drop the video camera on the skeleton, breaking his skull. The second negligent visitor acted even more unguarded: he in the gusts of admiration of the cave just stepped on and crushed her unique remains. Since then, the authorities of Belize have banned taking photos and video equipment into the cave, except for the camera that is in the guide. Moreover, now it is not allowed to enter the cave in the cave, however, no one in Aktun-Tunichil-Muknal will let you on his bare foot. You should definitely wear socks, so as not to leave any traces in this “sacred place”.