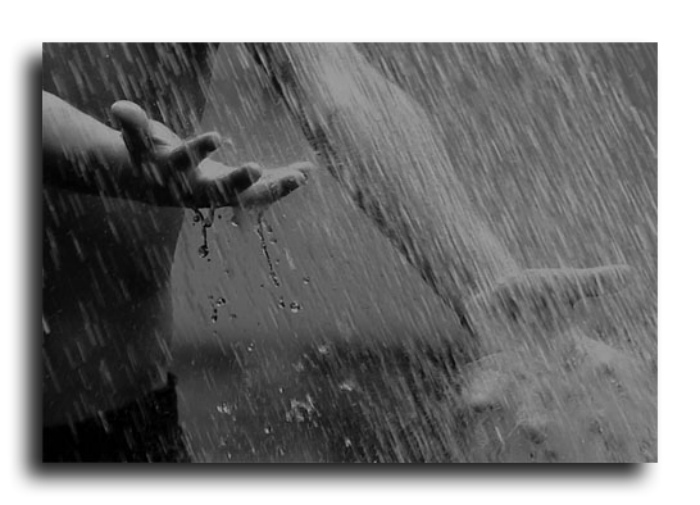 At the beginning of the 20th century across the United States traveled man who had sold vacuum cleaners or any other useful things in life, and the real rain. The name of this man, Charles Hatfield, and he was not a crook.

Agriculture of America began the twentieth century is the vast corn, potato and cotton fields. In time past rain had done the farmer a rich man, months of drought have done to the poor. When the parched earth has acquired the hardness of concrete, the farmer was prepared to pay even the Indian shaman, and with him to dance the rain dance.

Therefore, trade of rain could be lucrative. In the 1890-ies of the rain successfully traded the Aussie Frank Melbourne. Thank Professor rain burst, when reporters found that Melbourne carries with him a barometer, and a special courier he regularly brings his weather forecasts.

Clayton Jewell was raised in a balloon in the upper atmosphere of the dynamite charges that were undermined. Rare successes were interspersed with more frequent failures. In contrast, Charles Hatfield has attained the glory of the Lord of rain.

In the late nineteenth century Hatfield traveled through the States, the feeding of the sewing machine and was earning $ 125 per month. Along the way, he studied meteorology, physics, chemistry, buying chemical reagents and performed experiments. His dream was to find a way to artificially induce rain and to do this business. This activity promised him much higher fees, than trade of sewing equipment.

In 1902 he finally received a secret mixture of 23 chemicals which is going to be evaporation in large galvanized trays heated from below, which, according to him, should cause precipitation in the form of rain. He began with conclusions conventional the bet on weather the next few days. The first money went.

In 1904, Charles decided it was time to put the business on a commercial footing. He engaged his younger brother Paul, and in the midst of a dry summer in several California Newspapers published an ad that for a modest $ 50 brothers Hatfield organize rain anywhere in the state. A few desperate farmers got together and responded to the ad.

Charles and Paul went to the place, built on the mountain 6-meter tower and sprayed with the powder. After 2 days, the heavens fell on the ground with life-giving moisture. Happy farmers, until day and night guarding the brothers (it doesn’t rain — as though the soul allotted), to celebrate the saviors took away not 50, and $ 100.

Glory shattered instantly, orders started to come in packs from all over California. Meteorological Bureau staff tried to charge success on the cyclone, in response, Charles entered into a contract with the city Council of Los Angeles for the supply of rain, promising in case of failure to pay a huge penalty. Weather forecasters have declared that within the next 5 days it won’t rain. However, the next day after spraying the powder, the rain poured in buckets.

Lord of the rain

Growing fame, growing fees. Hatfield already signed contracts not just on the organization of rain, but guaranteed rainfall in quantities not lower than stipulated minimum. Sanatorium Esperanza posted a$ 1,000 per 46 see rain. The canadian city of medicine Hat under the pressure of the surrounding farmers signed a contract with a value of 8,000$ for the supply of 4 inches (10.16 cm) of precipitation. Caused by the first rain was drizzling, and then moved to the shower and several times blocked the ordered minimum.

In 1928 Hatfield filled with rain water, the Big Bear lake (California), and a year later put out the fire in Honduras.

Was Charles and failures. In 1906 the government of Canada signed a contract on the organization of precipitation in the Yukon. However, the rain, despite the best efforts of the master of the weather went, the deal was terminated. 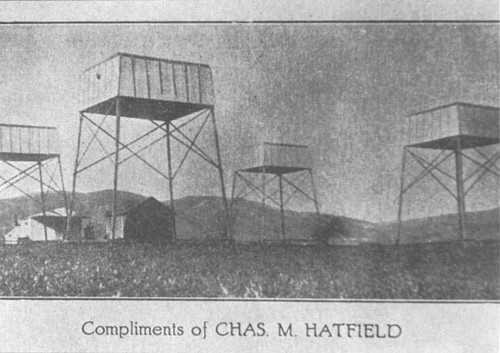 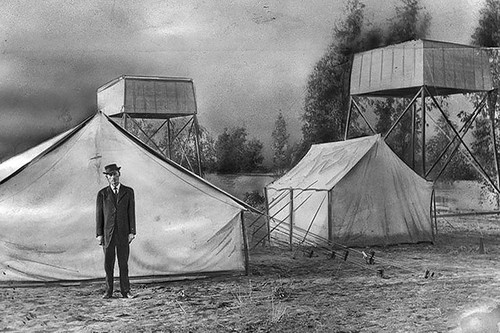 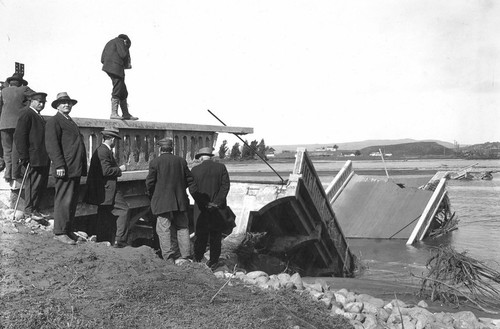 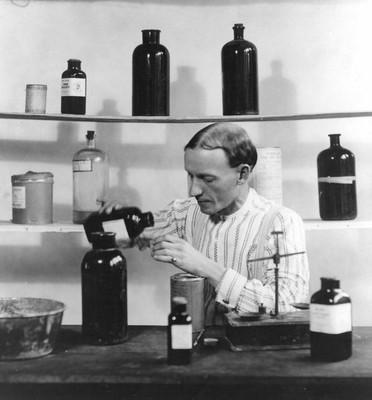 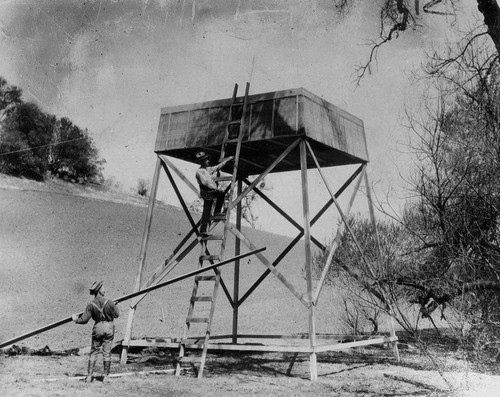 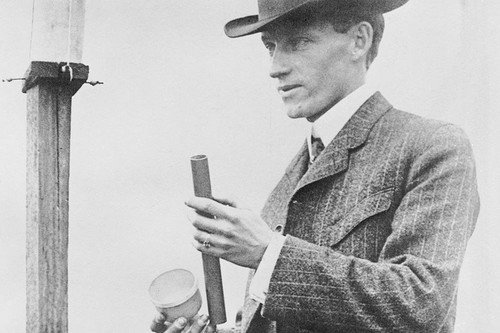 But the biggest failure was at Hatfield in 1916. Authorities in San Diego had to fill with water a shallow reservoir. At the end of December Charles had built several towers, the sprayed mixture, and what do you think happened? Nothing happened? Worse: Hatfield caused a natural disaster.

On January 5 parched heat of the city, the rain fell, which lasted more than 2 weeks. Filled and reservoir, and dry riverbeds. Water overflowed the banks, destroyed bridges, Railways, flooded homes, farms. The damage amounted to more than 3 million dollars. Instead to pay Hatfield promised 10.000$, the authorities put up a claim for damages.

The lawsuit lasted 22 years and only added fame Hatfield. In 1938, he was acquitted because the judge’s opinion (please!), no one have the power to cause rain, is only in the power of Almighty(!)

The end of a career caster rain put the Great depression. Prices for the products of farmers fell by 50%, the government to save the agricultural sector pursued a policy of reducing the number of agricultural products, reduction of acreage. Program irrigation hammered the last nail in the coffin of a unique business. Hatfield once again engaged in the sale of sewing machines.

Charles died 12 Jan 1958, never to reveal the secret formula powder. In the period of its activities as master of Hatfield the weather caused more than 500 rains, but scientists do not put forward versions of how he did it. Charles himself said that he is only helping nature, give the necessary impetus, but these words do not give even a hint of where to look for the answer.

It is noteworthy that although the glory of this person stretched from Canada to South America, put a monument to him in San Diego, where he experienced his biggest fiasco. On the pedestal is the simple inscription: Hatfield. The Rainmaker.

What modern science thinks about the activities of Charles Hatfield?

In 1961, a meteorologist one analyzed record of the weather in January 1916 at the numerous meteorological stations of the United States and determined that over San Diego then faced the four weather front that came from Alaska, the South Pacific, with Great plains USA and from Mexico. Rare coincidence led to the disasters, unusual even for the United States. In natural phenomena of such kind are of energy comparable to the explosion energy of thousands of hydrogen bombs. Can hardly manage them, warming at the top of the tower some kind of chemical compound.

In 40-ies of XX century was begun serious experiments with seeding clouds with aircraft of various substances that can cause the merging of small droplets of water in a large subsequent decline. Frequently used silver iodide and dry ice.

The results, as we know from attempts in the holidays to lighten the clouds before the approach to Moscow, are different. Processes in the atmosphere, of course, been studied much better than in the beginning of the last century, but they are too diverse, complex and unpredictable, otherwise we could now, with computers and weather satellites to predict the weather much more accurately. Often, as in the case of Hatfield, it is impossible to say with certainty, not whether the rain fell on their own initiative. And the price of flights are not justified by the cost of possible crop.