Chinese anthropologists have denied the African homeland of mankind 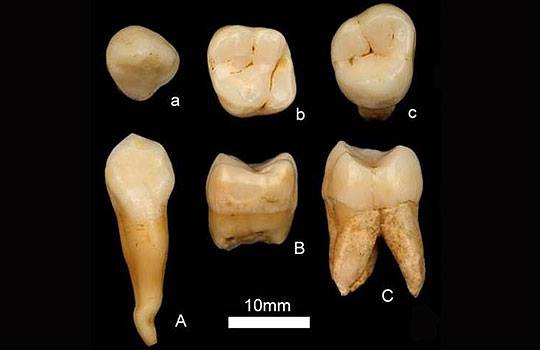 The story of human evolution, it seems, will have to be substantially rewritten in the near future. Recent discoveries of Chinese paleoanthropologists have questioned the existence of a single African ancestral home of mankind and convincingly show that at least one other, alternative source of formation of our species Homo sapiens was located in China.

On these findings the study suggests several teeth clearly belonged to people of the modern type, and is found in a Chinese cave. After all, according to the Dating, their owners, well-established modern humans lived in southwest China at least 75,000 years before the ancestors of modern Europeans left Africa

Three years ago Professor Zhao Lisa (Zhao Lingxia), researcher of the Institute of vertebrate paleontology and paleoanthropology, Chinese Academy of Sciences, led an expedition that studied the cave, Bijie (Bijie) in Guizhou province. Removing several metres of sediments of the underground river, scientists have discovered three human tooth, very similar to the teeth of modern humans. However, the age of the deposits in which the discovery was made, has forced anthropologists to wonder – fossils were buried in the cave in between 112 000 and 178 000 years ago. But according to current scientific views, the ancestors of modern humans came out of Africa to Eurasia about 100,000 years ago, much later.

This opening, moving the cradle of humanity from the African continent to China, could be attributed to the inevitable in the field of error – for example, incorrect Dating, or even a joke someone from ill-wishers of Professor Zhao. In fact, the history of science is full of such cases. However, strangely modern teeth recently found in China are increasingly, and all of them have the same problem – they are far ahead of the time frame in which natives of Africa even theoretically could reach Chinese territory.

“There is strong evidence, based on the evidence of fossils that China has been inhabited by humans before the arrival of the African settlers,” – commented on his discovery of Liu Wu.

As for the ancestors of these ancient Chinese “separatists”, then theoretically they could be local populations of Homo erectus pekinensis Sinathropus who lived there 600 000 – 400 000 years ago, implying paleoanthropologists. Indirectly confirms this hypothesis, the striking difference in technology between Chinese and African manufacturers of stone tools described earlier famous Chinese paleoanthropology Wu Xinzhi (Wu Xinzhi).

Thus, it is possible to say that stone tools and a large number of ancient human fossils found in China point to the “seamless evolution” from ancient erectus to the modern population of China. Even if the arrival of African migrants may have brought here some new genes, no substitution or mass extinction of people in the region didn’t happen, I’m sure Woo. “Many Western scholars tend to view Asian fossils and artifacts through the prism of what happened in Africa and Europe,” he says. – However, it is becoming increasingly apparent that many Asian materials cannot fit into the traditional narrative about human evolution.”

Indirectly this view is confirmed by the famous British paleoanthropologist Chris stringer of London’s natural history Museum, who said recently that “Asia is a forgotten continent and its role in human evolution may have been largely underestimated”.