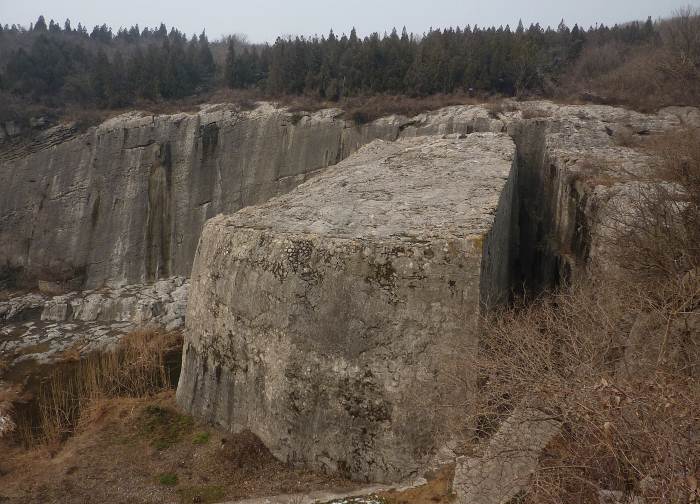 Ancient stone quarry located near the city of Nanjing, China. Used for many centuries as a source of stone for buildings and monuments of Nanjing. Now it is a historical monument. The quarry was famous for the presence of a giant incomplete stela, which was cut down during the reign of Emperor Yongle in the beginning of the XV century. In comparison with other Yongle construction projects, such as the Zheng Hee Fleet and the Forbidden City, the stele was one of the most ambitious and exciting projects.

Yanshan pit was developed in the time of the VI dynasty. It was mined limestone, which went to the construction of buildings, walls and statues in Nanjing and around it. After Zhu Yuanzhang (Emperor Hunu) established the Ming Dynasty in 1368, Nanjing became the capital of his empire. Yanshan pit became the main source of stone for major construction projects, which changed the face of Nanjing. In 1405, the son of Hungu, Emperor Yongle ordered in his career to cut down a giant stele to put it at the Mausoleum of Xiaoling for his deceased father.

According to the established canons of the construction of Chinese memorial steles, three separate parts were prepared: a rectangular base (pedestal), the body of the stele, and the head part of the stele (crown decorated with dragons). According to a version of the archaeologists, after much of the work was done, the architects suddenly realized that they could not simply move the giant blocks from Yanshan to the Mausoleum of Xiaoling, let alone install them properly. As a result, the project was abandoned. In place of the stele was installed a small plank (still the largest in Nanjing County), known as Shengong Shend (“Divine Services and Devout Virtue”). The stela was installed in 1413 in the “Square Pavilion” of the Mausoleum of Xiaoling. Three incomplete parts of the stele are still in the Yanshan career.