“Denisovtsy” were older than the Altai Neanderthals 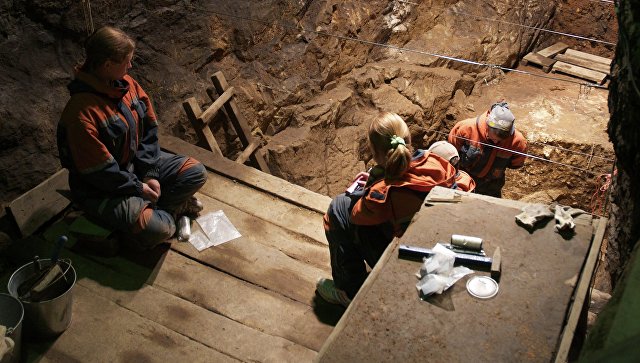 Geneticists learned to find traces of DNA from ancient people in the soil of caves where they lived for a long time and used this technique to study the diet of the first inhabitants of Europe and to demonstrate that the Denisians appeared in the Altai earlier than the Neanderthals, an article published in the journal Science says.

“We knew that certain minerals and chemicals in sedimentary rocks can” stick together “with DNA molecules.We decided to check whether human DNA can survive in the soil of those sites of ancient people and caves where, as we already know, ancient People, “says Matthias Meyer of the Max Planck Institute for Evolutionary Anthropology in Leipzig, Germany.

In December 2010, the famous paleogeneist Svante Paabo announced the discovery of a “third” species of people whose remains were found in the Denisovo cave in the Altai. This discovery was made thanks to the “resurrection” of fragments of the genome, preserved in three fragments of the bones of an ancient person – a phalangeal bone of the finger and two teeth found in the cave. As scientists initially believed, the “Denis” they found were the relatives of Neanderthals, who lived in the cave about 50 thousand years ago.

Subsequently, there were hints that the “Denis” appeared much earlier than scientists assumed, and were a separate subspecies of people whose DNA traces remained in the genomes of modern Polynesians, Indians of South America and a number of peoples of Southeast Asia.

Investigating the history of relations between Denis and Neanderthals, Meyer and his colleagues thought about whether it is possible to find traces of the DNA of both ancient people in the soil of the cave and to understand at what moments of time they lived there.

As geneticists explain, a man constantly “litter” his DNA – our skin constantly peels, hair falls off, and in fact all the products of vital activity contain fragments of our genome. If a person lives long in one place, then his genetic traces, in principle, can survive to the present day in deep layers of soil, formed tens and hundreds of thousands of years ago.

Guided by this idea, Meyer and his colleagues collected soil samples from the seven most famous caves in Europe and Asia, where Neanderthals lived, “Denis” and other ancient people over the past 500,000 years, and checked to see if anything was inside them.

As it turned out, there are a lot of such traces in the soil of the caves – Meyer’s team managed to find a large number of scraps of human mitochondrial DNA, the genetic code of cellular “power stations”, in each of the seven caves in Russia and European countries.

Moreover, in separate caves of these tracks there were so many that scientists managed to restore the history of people’s lives in them, and also to understand whether they lived in them relatives or representatives of different families of ancient cousins ​​of man. For example, traces of “Denisov” appear in the soils of Denisova cave first, about 170 thousand years ago, and Neanderthals appeared there much later. As scientists note, the scraps of DNA they found are the oldest trace of the existence of the “Denisovites” to-day.

As noted by Carles Lalueza-Fox (Carles Lalueza-Fox), one of the authors of the discovery, they managed to find traces of DNA, not only humans, but also other animals. Their presence, according to him, allows you to determine what kind of food the ancient people were eating and what animals could “fight” with them for living in comfortable and dry caves.

For example, the authors of the article found fragments of mammoth DNA in many caves, and in the Croatian cave of Vindia – traces of the genome of cave bears, which, according to scientists today, our ancestors destroyed about 25 thousand years ago.

Only in one cave – the Spanish El Sidron traces of animals were not found. With what it is connected, the scientists do not know yet, but it fits well into the fact that in this cave found only the remains of Neanderthals, but not animals. This can be explained by the fact that the inhabitants of El-Sidron, according to some scientists, were cannibals, or because the cave was intended for the burial of the bodies of deceased relatives, and in it no one ever lived.