Dinosaurs killed the burnt oil of the Gulf of Mexico 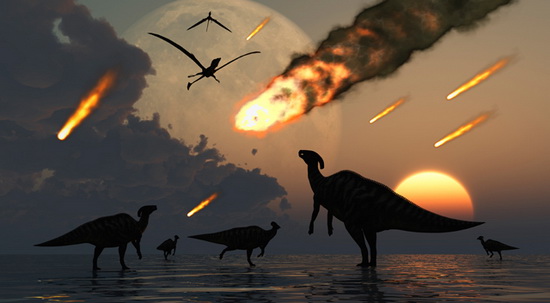 Dinosaurs, marine and flying reptiles of the Mesozoic could die as a result of burning of huge masses of oil, dropped from the rock strata of the future of the Gulf of Mexico by the fall of an asteroid, and release of giant masses of ash into the atmosphere.

The majority of paleontologists and geologists today believe that the last mass extinction of animals on Earth, which occurred 65.5 million years ago was caused by an asteroid impact left a giant 300 mile crater in Chicxulub in southern Mexico.

His fall no doubt, but its role in the extinction of dinosaurs and marine reptiles is still a matter of debate — if the asteroid and the resulting “nuclear winter” killed the ancient reptiles, then why with them have not disappeared crocodiles and turtles, and the birds that lived in similar conditions and environments?

Paleontologists under the guidance of Kaiho Kunio (Kunio Kaiho of Tohoku University suggest that they were able to find the answer to this historical mystery, drawing attention to the fact that the Chicxulub crater is close to major resources of the Gulf of Mexico – its huge deposits of oil and gas.

This gave scientists the idea that a meteorite strike could lead to the release of huge amounts of oil and its combustion, resulting in the atmosphere were emitted a huge amount of carbon dioxide, ash and aerosols. The marks of these fires, according to Kaiho and his colleagues, can be found in the rocks formed during this cataclysm in the form of a small “coal” balls, containing the so-called crown – aromatic hydrocarbon that occurs when burning oil.

As scholars have noted, these bulbs they were able to find in several places in Spain, Haiti, and in several other corners of the Earth. Judging by the number of these inclusions in the rocks, the fires after the strike, threw in the Equatorial regions of the atmosphere from 500 million to 2.6 billion tons of soot, much of which was due to the movement of the winds, temperate and polar latitudes. In total it burned more than 6 billion tons of hydrocarbons, which is slightly more than that, how much oil humanity consumes each year.

Emissions of CO2 and soot in an unusual way influenced the climate in temperate latitudes they caused global cooling, which lasted for several decades until all soot is not settled. The average temperature dropped 10-20 degrees at the poles and by 5-10 degrees in the mid-latitudes. At the equator the situation was somewhat different – here, the soot emissions caused the drought, as well as a slightly lowered temperature.

A similar pattern of climate changes have severely affected the lives of dinosaurs and marine reptiles due to the destruction of their food base of plants and herbivores. Photosynthesis in such conditions was impossible, which had to sharply reduce the mass of plant biomass and cause the successive extinction of large herbivores and then carnivores, and scavengers.

Crocodiles, turtles and birds, has a slow metabolism and to use additional food sources such as marine fauna or plant seeds, have been affected by this event in lesser extent that has saved them from extinction, scientists conclude.