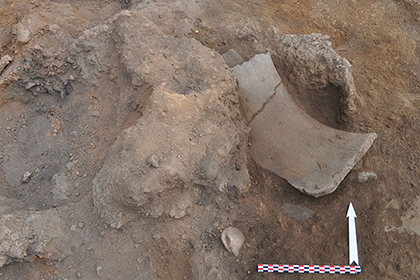 A group of French and Greek archaeologists found the oldest traces of wine in Europe and probably in the world. To do this, scientists analyzed the chemicals contained in the liquid impregnated in the walls of clay vessels. The article was published in the Journal of Archaeological Science.

The jug with the remnants of wine were discovered in 2010 in the ruins of a house destroyed by fire more than six thousand years ago in the village of Dikili Tash (Dikili Tash) in the North of Greece. With the help of chromato-mass-spectrometry archaeologists were able to identify chemical markers of grape juice and fermentation in a clay powder that is scraped from the inner surface of blood vessels. While neither pitcher had visible stains of wine or other residues.

Next to the fragments of vessels were found grape seeds, indicating the possibility that farmers Dikili Tash could take wine or grape juice production. Early conclusions are that the jars may have contained wine were made based on the presence of chemical markers of grapes, however, this does not exclude the possibility of the presence in the vessels of ordinary grape juice. Now, however, scientists have learned to find signs of fermentation, which is a small number of molecules of succinic and pyruvic acid.